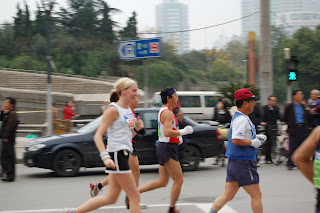 In my right element

I’ve always loved sports: playing, watching it, talking about it. When I was living in Australia swapped basketball (which I had been playing since I was 11) to long distance running and hitting the gym. Worked fine for me, especially the running.

In China, however, running simply has not been that fun. And I tend to get bored with gyms. So, last night I decided I’m ought to try something different, namely hot yoga.

I’m not completely new to the hot yoga scene. Back in 2007 (when I was living in Shanghai) I tried it, thought it might be good for someone lacking any kinds of natural flexibility skills, and bought an expensive card, which I only half-heartedly used. This time I decided to be a bit smarter about things. I went to a yoga club, negotiated the membership fees and was told I could try a class and then decide afterwards if I wanted to join or not. If I wanted to join, that class would be free. If not, I would have to pay for it.

The young Chinese people behind the reception desk were super nice and friendly as we were talking, and last night I went in for a class.

Since I am not completely new to hot yoga (however, I am terrible at it, so people might as well think so when they see me strike a pose) I thought the one hour class was going to be fun.

Something went wrong, however, starting from the very beginning. I felt dizzy, ill, my feet and toes (yeah, toes?! I mean, come on!) were cramping up and for a while I was about to pass out (I have fainted numerous times in my life so I have learned to recognize the signs). After struggling for 30 minutes I decided to leave, apologized to the instructor (who was great, my bad state of health had nothing to do with him) and snuck out. I felt a bit bummed about it, but it’s always best to listen to your body.

Then I got to the reception, where I realized that the oh-so-friendly people were in fact glaring at me as I came walking.

-I didn’t feel so well so I decided to leave, I said.

-You have to pay.

I paid in silence. Not another word. No talk about membership, about why I was not feeling well, about anything. Not even a goodbye when I left!

I left feeling rather stunned. They, who had been so super friendly suddenly behaved as if I was invisible, just because I left before the class ended (and, because I obviously would not be purchasing any membership card that night). Man, they sure have something to learn about customer service over here.

I decided about then and there that maybe yoga isn’t for me after all. Not only because of the way those fake friendly reception people treated me or because I felt bad during a class, but simply because, well… running is still more simple and straight-forward. Dear treadmill, here I come.
Posted by Jonna Wibelius at 6:00 AM

Jonna, hot yoga is not recommended for people with no regular yoga experience. Because of the heat, the body stretches more and it's easier to get hurt. The heat can also cause dizziness, like you experienced. If you want to do yoga, you might want to try regular yoga first, like Hatha yoga for example.

I was watching the news lately and there was a report on Dahn Yoga. Do they have that in China also?

There are a lot of hot yoga places opening up here in Seattle. A new one opened up near here named "Haute Yoga." As if I would choose a yoga studio because they can come up with clever little puns. Not that I mind paying someone to be clever and ridicule my posture, but I agree with you. I'd rather run or go to the gym.

Jonna, that's a very interesting blog entry. I've never had fainting as a problem myself, but I do understand about leaving a class half way ( I did a dance class in gym and proved to myself what I always suspected- I have two left feet).

Still, you're right- bad juju's from the staff there.

Like everyone else, I'm very tempted to start suggesting activities you could take up. But I wont.

Dammit! I cant help myself! I have to give my 2 cents too!

In Hong Kong and Singapore, there are both local and expat teams who do this. You get to socialise a lot, be part of a team clique, and it is physically demanding. Even if you are fit, if you havent done it before, you will be exhausted at the end of the 1st session.

Not so much a siggestion, but I'm a bit surprised you dont mention this sport. It is reasonably popular in Scandanavian countries, yes?


Ok, I admit the last one was a joke.

I agree with KANMURI, to get into the philosophy and essence of YOGA better to start with HATHA YOGA. nevertheless, it is unacceptable the way those people delt with you.
One of the many benefits of YOGA (any kind) it is a way of learning to use a better attitude towards others and that certainly they did not learn YET!
HELENA

I've had similar experiences with customer service from ethnic Chinese here in Singapore. They're very very ready to please until they find out you don't want whatever it is they're selling. Then they want to run you off as soon as possible, as if you're being around is going to cause them to lose sales or something. I've literally been 'shoo'ed out of a store before.

kanmuri -Trust me I know. I thought that since I have previous yoga experience I was gonna b fine. I sps I was wrong!

Neil -ohhh, I'm quite bad at that too! Give me a badminton racket and I'll be better!

Dr Heckle -yeah I feel more comfortable at the gym! How knows, I might get an urge to try something else, "different" while I'm in this spirit of trying new things". Belly dance? Fencing? Boxing?

Adrian -ohhhhh! Suggestions!!! Me likey! :) Funny that u pointed out a few sports I've already mentioned:

1. Dragonboat rowing -sound like fun, and good training for the upper body. Would not mind trying, but wonder if here's any regular club in SH?

2. Badminton -yeah, I don't mind this one either. Still prefer sports with bigger balls (haha!) like bball or football.

3. Surfing -did that back in my Australia days! Loved it -but was veeeeery bad at it, unless I was standing on a huge malibu board :)

Helena -yeah, I guess I should have done more regular yoga before. Let's see if I ever decide to give it a go again. Not for the time being though!

Brad -I understand that they lose interest when u don't wanna make a purchase. However, sometimes I think -do they have to be so obvious about it!?

They must not have grasped the concept of word of mouth or social media entirely yet. If someone has a negative experience and they talk about it others are less likely to go there. If they had been polite then you might have thought if them when someone mentioned that they were looking for a place to do yoga.

Learn yoga smoothly and easily. Take it lightly and don't force yourself :)