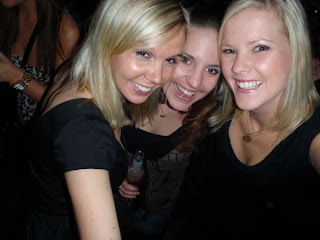 When you are reading this I am in (or on my way to, depending on if you are an early bird or not) Hong Kong. Left early Monday morning and will be back in Shanghai late, Wed night. Since it’s a work trip I cannot promise you any updates or photos.

Although I’ve been to Hong Kong once before I cannot say that I know the city. My last trip was a 5-day stopover on my way to Sweden from Australia, that, my friend Mia and I spent feeling as confused as lost. Not to mention giant-like. We re-named ourselves to Yeti-Mia and Giant-Jo (yeah, back then I was Jo, not Jonna, because I got sick of all Aussies calling me Joanna) and these were also the names we told everyone who wanted to take our photos (quite a few people and I'm not going to lie -we loved it). We had a great time even though I have no idea where we actually went? Like I said, a bit disorientated.

One of my freshest memories is from us, about to take a ride in a tiny rollercoaster (some amusement park –yeah I know, I know, don’t ask! And no, it was not Disneyland, this was back in 2002), sitting there with our knees hitting our chins (Mia is, as you might have guessed, is a flag pole and a big foot just like me), ignoring the worried glances from the staff. Just as we are about to take off, one of the guys comes running towards us and yells:

-Ladies! Keep your heads down! KEEP YOUR HEADS DOWN! Duck during the whole ride!!!

….and we did. Trust me, we did (I was actually so scared I closed my eyes, but according to my much braver friend Mia, our heads had not actually been THAT close to the poles. Just a bit).

Another good memory is from us realizing that the not-so-fancy-but-oh-so-expensive Guest House where we were staying (this was long before I had any connection to China and I did not know an iota about haggling) did not have a shower but a… hose. Which were located on top of the toilet?! So, in order to shower, you had to actually SIT (or stand –but not us because we were too tall. This hose was as tiny as it was short. I suppose we could have squatted) on the toilet and wash yourself. Not that I want to tempt you or anything, but we actually have photo proof of this. Scary, locked-up photos of us washing our hair while sitting on the toilet. Uh-uh.

Memory number three is about the food. Mia was not a fan of the local stuff and insisted on eating at Pizza Hut as often as possible. “Boring!” I thought –and dragged her along to all kinds of strange places that I could find. Since Mia still refused the cuisine, she would ask the waiters if they had some (safe) pasta/pizza dish she could get meanwhile I was munching away on my rice and god-knows-what. This worked well until one day when a waiter promised her a plate of Spaghetti Bolognese and ended up giving her a bowl of rice noodles, ketchup, sausages and baked beans?! In order to soothe her trauma and show what a good friend I was I agreed to eat with her at Pizza Hut the next day.

Yeah, so that’s the memories I hold from my last visit to Hong Kong. Today, 8 years older (GOSH!) and wiser (right?) I hope I can get a better idea of what the city is all about.
Posted by Jonna Wibelius at 6:50 AM

That's funny about the roller coaster :)

If you want to ride real roller coasters some day, go to Cedar Point in Ohio (USA). Much, much better than the Disney rides. I reviewed it a while ago on my blog

I went to Hong Kong last year and had a great time! My hostel was better than yours, tho :D I hope you have a great time.

Jonna this is hilarious because after living in HK for six years, it can still be a little disorienting. If you're still in HK reading this, get out to Avenue of the Stars and catch the light show, it's free. Just stand there an look out across the harbour(every night at 8_only 10 mins long) No other scene like it in the world!!! I hate to tell you, but that shower hose you were using is probably the hose used for washing your bum (common feature in Asia)the shower was probably down the hall. Sounds like you were staying at Chung King Mansions. And the amusement park was probably "Ocean Park"...yep, designed for hobbits, like most of HK. Next time you're in HK, let me know, I can direct you to some amazing places that the guide books do even tell you about. Tell your boss to take you out to the Jumbo for dinner! Have fun. Cheers.

Oh Jo -- if only you told us in advance, we could have given you lots of tips on HK.
Have no idea of where the tiny rollercoaster might have been -- Ocean Park? Were there dolphins and pandas as well? And a gondola that took you over the mountains, next to the sea?
So sorry to hear about the food. The restaurants are great here. But probably not if you're having cheap pizzas from chain stores! (A very good pizza can be had at Gaia, in Sheung Wan).
As you're now on a business trip, I hope you get better accommodation this time. As I'm sure you've noticed, everything is far more expensive here. And most things (aside from maybe T-shirts at a street market) are not negotiable.
Have a great trip!

I've always wanted to go to Hong Kong - You'l have to give 1st hand tips for my file/wish list.

as for the Tomato & Noodle soup a la Ketchep....mmmmm sounds yummy?

Have a good time!

I feel like I should be surprised about the showering facility you described but... I'm not anymore. Guess I've seen and heard too much like that myself already.

(not necessarily your) Uncle Skip said...

I couldn't help myself. When you said you were disoriented in Hong Kong, I immediately thought about the play on words and wanted to yell, no, no, no. You only became disoriented when you left Hong Kong for Sweden.

Hong Kong welcomes you. Next time let us know when you'll be here and your blogging fans will show you the best parts of the city!

Oh, i am so jealous - one of my favorite cities in the world! I wish i could live there; though its always a bit bitter sweet as the hotels are so much more expensive than Shenzhen accross the way that i always feel guilty as i am only stopping on my way through.
Yay! for having work pay, i am sure your accomodation should be upto snuff this time. As someone who doesn't know any Chinese it would be interesting to know how you got along language wise... I figure most people in HK should be able to understand mandarin; thought i'm not sure if they speak it in like resturaunts etc...

The noodle soup with ketchup doesn't sound too bad, haha!

Have fun in HK Jonna, and you really have to give us some first hand tips :D

welcome to Hong Kong~~
agreed with above, tell us nextime and we can have suggestion for you to have more great and lovely food in Hong Kong~~

enjoy your trip and wish you love here~~

Thanks for all the comments!!! I loved Hong Kong but I wasn't there for fun, hence why I did not tell u guys that I was going. Next time I go for a holiday I will def take some of your recommendations! :)