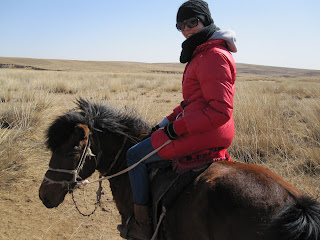 If you ever get a chance to go to Inner Mongolia: go horseback riding! Experiencing those vast grasslands (regardless if they are green or yellow) from the horseback is simply outstanding.

We left Hohhot early one morning in order to make it out to the grasslands of Xilamuren before the afternoon wind kicked in. The 2-hour car ride itself was quite interesting. As soon as we left Hohhot (we literally drove through a gate, and then all civilization was replaced by mountains, it was pretty cool!) I was reminded why I'd travelled to Inner Mongolia. As usual, I was something between excited and terrified about riding a car in the mountains, seeing that I’ve had my deal of bad car experiences in China, but the roads were dry and people actually kept the speed limit, so it went pretty smooth.

We arrived at a small village just after 10am, and quickly picked a Mongolian pony each. Riding alone was out of the question, seeing that neither my boyfriend nor me are experienced horseback riders (I used to ride as a kid until I fell off and got scared. It’s not until recent days when I’ve started enjoying it again), so a Mongolian man joined us with his pony. He immediately took a liking to me, who started off by asking:

-What’s the name of my horse?!

…and then, when he picked up his whip, getting ready to smack Xiao Hong:

Completely shocked by this comment he started laughing, although he actually took my advice and kept his whip away from Xiao Hong during our ride.

A few things about riding across the Mongolian grasslands in the beginning of April:

It was extremely windy and cold (it’s colder at the grasslands than in the city). Without our sunglasses and hats it wouldn’t have been possible.

Don’t let the size of those Mongolian ponies trick you –they can run pretty fast! We kept out ponies under control and received praises from our Mongolian guide for our riding skills (me: what skills?!), but I saw numbers of groups of Chinese tourists who had obviously never been on a horse before, and still set off galloping straight away. Eventually one girl and one boy actually fell off, and their horses disappeared across the hills. We trotted by them, noticing that the girl looked pretty bad and probably had to be taken to a hospital.

We rode for about 2 hours, then the wind got too strong and we turned back. The route was pretty “set out” and I suppose that's my only complaint about the experience. However, what was nice about it still was the feeling of complete freedom. The hills were far from green (more like yellow/brownish) and the lakes were frozen, telling us that we had chosen the wrong season for our ride, however, I liked the fact that we barely saw another soul during our ride, and that we could let our horses run across the hills without risking bumping into some other group of riders. Instead we rode past herds of cows and Mongolian ponies, some curiously running next to us for a while. Our Mongolian guide was also quite friendly, especially when he noticed that we could communicate in Mandarin.

I’ve already decided to go back up there, maybe not to the same spot and not during the same time of the year, but I’d like to go again. Then I would rent a horse for a longer period of time (5-7 days) and ride for days, spending the nights in a tent or in one of those small, cute, Mongolian huts that we passed numerous times. It would have to be during summer, however (July –my guide recommended), as the wind isn’t as strong then. And obviously not this year, but maybe 2011.

Before then, however, I need to work on my leg muscles because maaaaaaan… was I sore the 2 days after our little grassland adventure?! Eh, I could barely get out of bed! Haha! 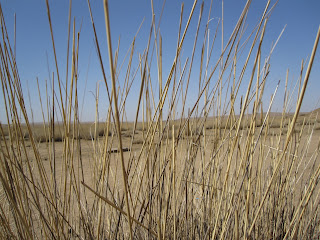 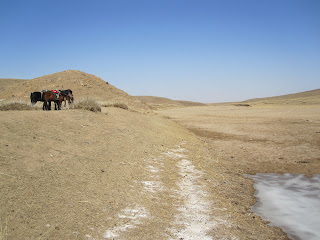 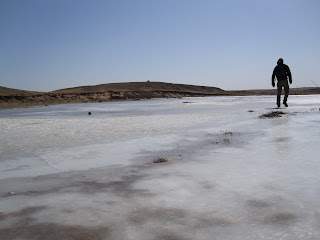 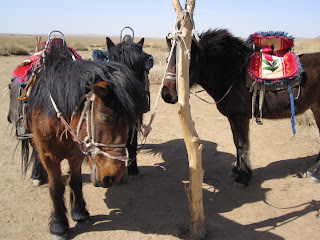 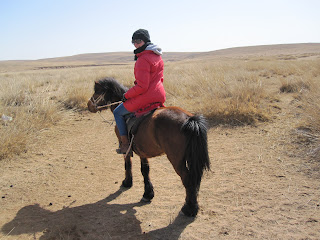 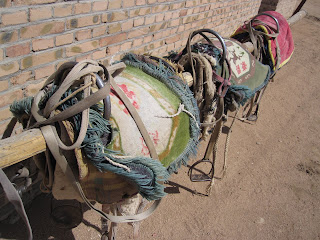 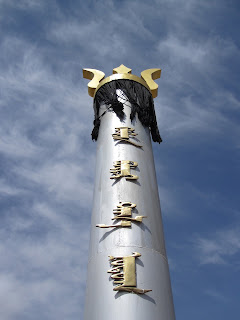 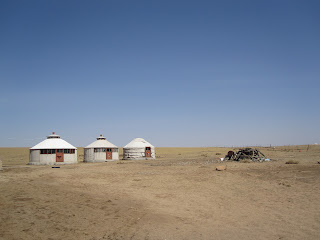 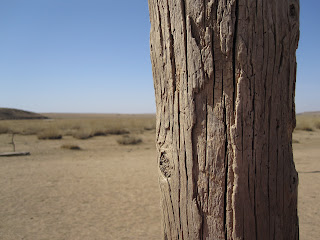 OOhhh! How amazing! I love the pony you got to ride, too! They are tough little things, their size is deceptive.

One photo with a horned native hat, looks like a totem pole, is quite interesting. Wonder what the characters meant?

WarPony -I know, Xiao Hong was a little beauty! :) He was so kind, but yeah, quite fast!

Ikabod -Yeah, that's Mongolian language. I have no idea how to read it. And frankly, a lot of locals had no idea either! People mainly speak Mandarin up there.

Hey Jonna -- A totally random question.
What saddles do they give tourists -- wooden traditional Mongolian saddles? I hear they are super uncomfortable.

Or do you get more standard English styled ones?

I just got back from Queensland, where I rode in an Australian stock saddle for the first time, and it was the most comfy thing ever.

Beautiful photos. My dad has been to Mongolia a few years ago. They made a trip for a couple of weeks through the whole country with a tour guide (which good speak german perfectly, as they r germans) and it was just breath-taking. Endless natureness :)
They also slept in those yurts.

Goin to Shanghai in Octobre for holidays, maybe we can catch up with a friend as well, who is a chinese girl from SH.