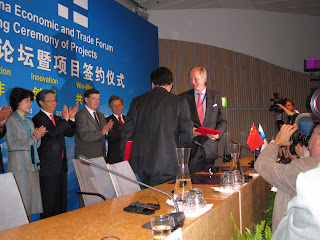 Chinese businessmen continue to astonish me. Last summer, I went to a big business event in Finland and was surprised by the somewhat inappropriate questions I was asked. Back in China, the behaviour of these men in suits continues to make me wanna go: “what?! Did he just say that?!”

During the last few weeks I’ve been to numerous events, seminars and signing ceremonies where I’ve seen a very non-business-like behaviour. I’m not going to blame all these bored businessmen, speeches that go for more than 5 minutes are boring! But one of the parts you have to play when you’re in your fancy suit is to listen to them still, right? Well at least that’s what I always try to do.

Chinese businessmen, on the other hand, don’t try that hard. Or OK, let’s not generalize, because some really do. Some are great. But then there are the ones that fall asleep, talk on their phone, or use their mobiles to play computer games/ watch movies. That’s a step in a direction that’s too far away from normal business behaviour if you ask me.

I think if you ask them why, their answer would be simple: they’re bored. But what does that mean for future business events in China? Well maybe a new norm needs to be set in order to keep people’s interest?

At the most recent signing ceremony I went to, one of the men (a tall, fairly young guy from northern China) spent most of the speeches chasing me around the room, trying to take my photo. I discreetly tried sneaking away from him, I even spent 10 minutes in the bathroom with a locked door in order to get him to give up, but he was persistent and seemed to enjoy the chase-game. It was just slightly embarrassing when his camera went “click, click, click” (and always with a flash) and people turned around to see what was more important than the mayor’s speech, and saw me, looking uncomfortable and trying to get away from a man in a suit, armed with a camera.

Not blaming him for being bored. Just saying something ought to change.
Posted by Jonna Wibelius at 7:08 AM

Ridiculous!! As if chasing foreigners down in the street and taking pictures of them wasn't enough... hahah... I can't believe they would do that even during a speech!!! You would think that people that are so concerned about losing face would try to avoid things like that! Besides, it's 上海！There are foreigners everywhere there!! Silly Chinese... haha

I think it has more to do with the fact that this dude is a total creep!

sounds like a psycho is on the loose. you should have confront him about it. and tell him it's against the law to take pictures you don't know of!

heheh, if you dont like these chinese attitudes, you can always leave or stop complaining.

Annie & 胡崧 -I think he was just excited to see a tall woman. He was very tall himself. :)

C -Nah.. he wasn't rude in any way, he just really wanted us to take a lot of photos together.

Anonymous -why should I leave? Because I wrote a blog post about something I've come accross? Or because I have an opinion? Nah, I don't think so. I don't let anonymous, angry people dictate my world.

China's economy grew so fast in the last two decades that Chinese people simple didn't have enough time to digest all the changes coming their way. In another two decades, things will become more normal, including the simple etiquette that you have described here. Meanwhile it's embarrassing. Maybe you should start charging for pictures taken with you.

Stockholm marathon is right around the corner! Are you going? Imagine how good a run on Västerbron will feel :)

You should have taken his camera!

Alex -Yet to take on a race in Sweden. The only one I've done so far is the bridge race between Denmark and Sweden. It's on again this year, but I don't get home in time to run it... :/ Are u running Sthlm Marathon?

Chocolatesa -ha, yeah, unless there would have been a signing ceremony taking place next to us I might have challenged him more.

that has nothing to do with chinese attitudes! he was perving on her!. :-P

C -Not sure if he was a perv, but yeah I agree that it has nothing to do with "Chinese attitude".