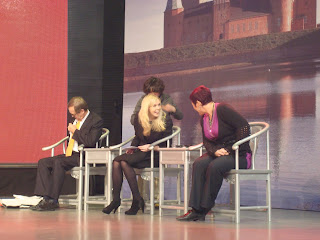 OK, so how weird was that, on a scale from 1-10? Something like 11? Or maybe even 15? Yes, of course I’m talking about seeing myself on Chinese television last night! When I first saw my face appear on the screen I almost turned the TV off, as it simply felt so awkward, and I looked so… different (I’m not sure about the “camera adds 10 pounds thing” but it certainly adds something because I sure didn’t quite look like me? Also, my nose looked gigantic in the profile shots –so now I know what all the Chinese people are talking about when they claim that laowais are big-nosed!)

To my great surprise, however, there was no voice over when I spoke and the Chinese characters were in harmony with what I said: so in other words: the film crew must have understood my Mandarin. YAY!

They had been editing the footage quite a bit, however, so I “only” answered three questions, rather than seven that I did on the day of the shoot (we shot for 2,5 hours but the end product was “only” 50 min). However, they definitely took away some of my idiotic answers –thank god for that!

Anyway, towards the end of watching the show I got used to seeing my face on the screen and it felt kind of… fun! I’ve been on a TV show, haha! Would I do it again if I got a chance? Definitely (with some more time to prepare, though!)!

OK, I promise I won’t go on anymore now about this TV thingy. Thanks for all of your comments (you who watched it –can’t believe some of you did –even from Malaysia!). I made a little camera recording of myself when I spoke about Swedish food (yes, for real -I filmed the TV! And yes, I know, I'm a total nerd!), but I cannot find my camera cable today so I night as well spare you, hehe!
Posted by Jonna Wibelius at 6:31 AM

Great that it came out quite well for you .
I'm kind of ticked off though , wanted to watch it on CCTV4 like you said . But , I do not get this Channel and I have the Asian Package too . I watch mostly CCTV９from Beijng .
Now I like to see your Tape of the TV and see the B** Nose that everybody is talking about .. even in LA .
Hehe .. just kidding Jonna .
Sorry !

you absolutely have to post your segment that you filmed. we want to see you in all your glory!

gosh jonna, you should really work on that nose hang-up of yours or you might offend people with an ACTUAL big nose! :) no offence, but seriously...

Is there a clip online? Youtube? Sinatube? Whatever :P I wanna see. Please link. Thanks.

Thanks for all the comments! U can watch the clip online from CCTV4 if you use Internet Explorer :)

I was also there and made a question from the audience.

Well, my question is if you have a link to where to see the show on internet?

U have to find the right date 12 月12 日 and then scroll down to the program, 城市一对一

Great work Jonna, very exciting!! Being in front of the camera is rather nerve racking... Thats why I'm behind it!!!

It seems that I cannot find the video at http://bugu.cntv.cn/live_channel4/index.shtml ,
the date could not be found , maybe u have a link at youtube or something