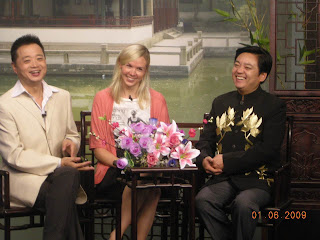 Making an appearance on a TV show in Suzhou, June 2009

Two days ago at work, we were contacted by a TV station that wanted to do a 1 hour documentary about a town in Sweden. We invited them in and sat down to discuss the outline of the program, that mainly centred around a panel discussion:

TV team: We obviously need a celebrity for the panel.

Us: Right, what kind of celebrity were you thinking?

TV team: That doesn’t matter. We have know idea of who’s famous in Sweden. You tell us.

Us: Right… eh… so when are you shooting this program?

TV team: yes. And except for the celebrity on the panel, we would also like some famous Swedes in the audience! Can you get some flown in for us?

Don’t you just love this?! Not even when we said that there was no way a person could get a visa, much less make it to China, within the time frame that they were giving us, did they seemed worried:

TV team: well, we expect you to come up with something for us.

Again, got to love the attitude. Here’s a TV team that’s taking no responsibility what so ever of what they are doing, much less plan their own programs. Think if the same thing would happen in Sweden: a team like that wouldn’t even be able to get a meeting booked: no one would take them seriously!

But over here it’s different, and of course we did our best to help them. Hopefully they will get a celebrity interview by phone on the day of the shoot (because we simply couldn’t go around the visa issue).

As for celebs in the audience –my boss asked me to do a stunt. And how could I decline?!
Posted by Jonna Wibelius at 8:32 AM

You're sawesome in the photo!

Good luck with the planning.

Wow! Tell us again who do you work for and what do you do?

Totalitarian country does not like planning ahead,people are more used to do what a "Leader" tell them to and just do it without invovling too much time or resource management or thinking. They will just play by ears. Good thing is it may appear highly efficient - cuz no one will need to argue the feasibility of a certain programme or so, bad thing is it resulted in increased difficulties of risk and quality control.

wow! so you are one of the movers and shakers! great job !

So you are a celebrity? Can I have your autograph? Heehee

Nester -thanks :) I didn't understand much on that set, so I mainly laughed and tried to look as if I was having a good time.. truth to be told, i was feeling kind of confused!

Chan -sorry, I keep my work out of this blog.

Anonymous -yeah, "play it by ear" is a very good description of how things work here... I agree that the result of this kind of thinking is often a lack of quality.

Keats -movers and shakers?! NOOOOO! Trust me, I am not even close to that...

Go Jonna!! I'm glad you get to be on TV!! Keep up the good work and blogging. I have been a reader for a while and love your insights/experiences you blogged. Even if I don't have the time to read your blogs, I always go back and read some!! Stay safe and keep on moving forward in China!

You can check with embassy, they also do visa within a day. Submit documents in morning and get visa in afternoon. Just pay something extra. Anyway, who is celebrity now in Sweden ? I know Roxette and Abba.

Anoymous -thanks!! Glad to hear you drop in from time to time :)

Mountaincat -I don't think the visa is the most critical point -in Sweden people live according to their calendars and spontaneity is not that common. Try to tell someone they need to be in China to appear on a TV program they have never heard off in 3 days -and you'll get a suspicious head shake back... Also, try getting Roxette and ABBA to jump on a plane just like that... naaaah, I think u need a liiiiittle bit more forward planning!