A ride to remember 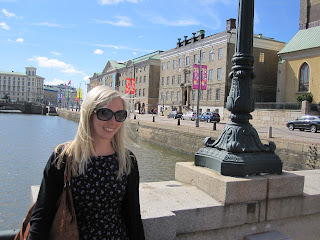 A blonde from the country where the sky is "always" (OK, often!) blue -yes, that could be me!

In a city that has more than 45 000 taxis, you would think that what happened yesterday wouldn’t be possible. I was running late, and caught a cab to meet a friend at Sinan Lu.

As soon as I said the address to the taxi driver, he started smiling and nodding to me:

-You know what!? If it wasn’t for your big nose or your blonde hair, I would think you were Chinese! You speak like a local!

I was in a good mood and so was the driver, so we went on chatting. Once he discovered I could talk he wanted to know everything about me: where I was from, how often I went home, how long it took for me to fly home, what I was doing for Christmas, why my parents didn’t live here with me, how many siblings I had, what Sweden was like, how old I was, and so on…

I told him accordingly. Then we arrived at my destination, said our goodbyes and parted.

Ten minutes later, a Swedish friend of mine called:

-Jonna, did you just get off a taxi at Sinan lu?

-Eh… no… but I think I’m sitting on the taxi that you just got out off! I’ve got a driver who simply cannot stop talking about the Swedish girl he just dropped off. He told us she was tall and blonde, spoke good Chinese, has lived here for 4 years, studied in Suzhou, and comes from a country that has a smaller population then Shanghai but where the sky is always blue! She has 2 older sisters who both have families, and one little brother that still studies. All of her family members have been to Shanghai to visit her, but they don’t want to move here permanently. She is going to Australia for Xmas because she thinks it’s too cold in Sweden… sounds familiar? This is SO YOU!

-Anyway, he loved you. I just thought I’d share it.

Hilarious!!! Or like my male colleague said when I told him:

-Oh, a taxi driver targeting tall, blonde laowai chicks! (Because the friend of mine who jumped into the same taxi is as tall and blonde as I am). There you go, some of them choose their customers carefully!
Posted by Jonna Wibelius at 7:04 AM

Yay to blondes. I'm one, too :P But male. Go Jona, show them of what dough are blond lao wai made ;)