As close to a real life 'Pretty Woman' experience as you can get (only the music missing!) 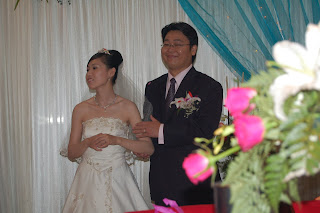 Like I mentioned before this wknd, our Suzhou flat is currently hosting my dearest sister and her husband-to-be, a Danish guy named Michael. With their wedding coming up this fall, their China trip has been highly influenced by pearls and white satin –in the search for the perfect wedding dress.

My sister had brought some pictures for inspiration but those ones soon went down the bin… as she didn’t really need them. These shops had everything a bride-to-be could dream about –and more. You could even go in there and design your own dream dress from scratch…. And the best part of it all? It is cheap, cheap, cheap!

My sister ended up settling for a beautiful white, silk dress with some pearls and a small train, which were hers for 780 yuan (compared to what a dress costs in Sweden this is more than a bargain! Only renting a dress over there often costs something like 3000-4000 yuan). She also did some adjustments to it, and obviously it had to be completely re-done according to her measurements, but I am confident that it is going to be a beautiful dress. We don’t have to wait long to find out: going to pick it up already tomorrow afternoon.

Even if you are not getting married it is kind of fun to spend an afternoon on Suzhou’s wedding dress street. Eh… if you are a girl that is. Most shops sports huge changing rooms with large mirrors, and brides-to-be can borrow everything from shoes to tiaras and necklaces to complete their bride-look. Some shops even have catwalks (!) where the bride can walk around in front of the mirror while her boyfriend/husband to be admirers her from a spectator post. In fact, ALL Chinese girls looking for a wedding dress came together with their partner. I believe we were the only ‘2 girls couple’ (the reason for that being that my sis is very traditional and doesn’t want her soon-to-be-hubby to see her in her dress before the big day) but then I also believe I was the most enthusiastic of all the spectators. While most of the boyfriends played with their phones/falling asleep, I was gushing along from my chair, going all ‘ohhhhh’ and ‘aaaaahhhhh!’ and almost shedding a tear every now and then as my sister looked totally gorgeous in all those white gowns (and, guess who came home that day speaking non-stop about weddings and dresses. I think my boyfriend is so scared now that I better lay low on the wedding talk for a bit….)

But anyways, the point I wanted to make is that if you are getting married, and live in China (or are planning a visit here) I strongly recommend you to save a lot of cash (and maybe getting your dream dress made at the same time?) by visiting Suzhou’s wedding street. The street actually doesn’t have any special name, all taxi drivers knows it by ‘wedding gown street close to Tiger Hill’ (said in Chinese). Actually, when my sister wakes up today I have to ask her if that’s what the business card to the shop where she ordered her dress says too.

(Oh, I wasn’t allowed to take any photos in the shop but I’ll take some of her in the dress once she gets it on Wednesday!)
Posted by Jonna Wibelius at 7:29 AM

Wow - just did the yuan conversion to dollars - that dress was a MAJOR bargain!!

I don't know if there are any streets like that for wedding dresses here in Xi'an, but we do have one odd dress shop. Inside the city walls on one of the main streets there's a big dress shop with huge windows on the front. They've usually got two or three mannequins sitting in the front to display the dresses. Then when you walk by, you notice that they aren't mannequins! They're real girls holding very still! Sometimes they might move a bit to adjust a stray hair, but most of the time the most you'll notice is some blinking.

I don't know if there are many stores that do this in China, but we usually hear people at the hostels talking about the dress shop like it's more interesting than the terracotta warriors.

Best wishes to your sister, and congratulations to her husband-to-be on finding such a lovely bride! I wish I had been there to see. I hate shopping and am not at all sentimental about most things, but weddings are just, well, just DIFFERENT!

When I ran a bridal boutique I noticed that pretty much ALL the designers had their dresses made in China of course. Anything made by American labor could not be bought for under $3,000 retail.

American dependence on China is a little bit scary: http://www.squidoo.com/chinesedominance

interesting! But, it still poses a question: what about the quality? cuz you know, you don't want your sister running around buck naked in the middle of the wedding, haha.

Congratulations to your sis on her upcoming wedding.
And more "Happy shopping" together.There is nothing more satisfying than lots and lots of wedding shopping!

What a fun day! I'm excited to see pictures of the dress! I love weddings!

Are there some export restrictions that would prevent someone from exporting the dresses to another country? It seems like a profit could be made ...

It’s a wonderful and expressive story. I enjoy it.

What a shame. The first thing I thought to myself was "PICTURES!" But, I can understand the problem. There are shops here that think they're high fashion and don't allow pictures to be taken inside the store either. The problem is, most of the dresses at these stores aren't nice. It sounds like this Wedding Street is fantastic though!

My wife and I are, obviously, already married, but we were married in Singapore. Her family wants us to do a renewal of vows ceremony for their benefit. Maybe we can take a vacation and get a nice dress for a good price at the same time? Hmmm.

Omg epic!!! I'm totally writing down this information . . . even though I still have yeeears to go before marriage haha.

Congrats to your sister! I'm glad both of you had fun and she was able to find the perfect dress!

We're new in Suzhou but also recently went downtown close to Tiger Hill to buy some plates, cups and household things. Found a nice shop with good quality crockery (although it was next to a smelly doggy parlour).

Where do you take Mandarin lessons. We feel like illiterates in the city and although we took some lessons back home, we realise we need to get up to speed fast!

Sounds lovely. Saving money is a real plus. We married our daughter two years ago. Whew!

LoneANewIdea -it sure was! We r picking it up tonight... I hope it is good!

Tripfriend -live mannequins?! whoooah. Here Suzhou has something to learn. Although it sounds a bit scary....

flyingfish -yeah, aren't they?!! You should have seen me melt like butter in the sun when we walked around those shops. I am normally not that fond when it comes to fluffy white dresses but after Monday's dress shopping experience I have changed my mind. More fluff!!! :)

Gigwriter -yeah that doesn't surprise me one bit. So much cheaper over here.

Recipes for life -thanks!! :) And you are right. few things beats shopping with your nearest and dearest! :)

Casual Observer -it does, yeah. I have to look into that. Because I actually thought about the same thing.

Brad F -u sure can. When my sister came here she told me about people paying some insane amounts, like 12,000 yuan for dresses back home?!??! GAAAH?! that's just mad. You can get a very decent trip to China for that sort of cash. AND a dress.

Betsy -yeah, and even if u r not getting married yet u should visit this place.. it's fun! :)

Rihann Koekemoer -welcome to SuzhoU!! :) I study at Suzhou Uni, although the courses have already started so a bit late to sign up now.. u can sign up for the fall term though. East campus. Just tell the taxi driver: 苏州大学东 门 suzhou Da xue, dong men, (=Suzhou Uni, east gate) and he will take you there... You can also study at some of those private mandarin schools, like Raffles... well, actually, there are many. Google should be able to give u some hits. I have never tried those schools here in Suzhou but I am sure they are OK for beginners.

Lover of Life -saving money always feels good! Especially in times like this!

Hi, Jonna, I found your blog today. I am from Suzhou! are you living there?
But now I am studying in Melbourne, Australia.
One of my class, net communication requires us to follow a blog, and give a presentation on it. I found yours very interesting, to me, a Chinese.
Many life aspects are considered so normal that I have never paid attention to. Haha!

Bing -yeah I am living in Suzhou! :) glad to hear u enjoy my blog... although doing a presentation on it?! Gosh, sounds so... serious?! Haha! Although I am flattered if u end up doing so! :)