Vaccinated against the swine flu 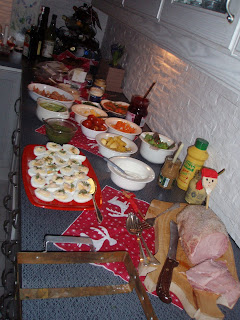 One shot = three meatballs on Christmas and I'm done

Sweden is one of the few countries that has chosen to mass vaccinate all citizens (voluntarily) against the swine flu. 18 million vaccine doses were originally ordered (2 shots per person, Sweden’s population is around 9 million), however, after almost 80% of the population have received their first shots it is being debated if that second dose is actually needed and the second dose has been temporary cancelled.

I’m not sure what the deal is in China, I know they are vaccinating some people but far from everyone, and since I prefer dealing with medical matters in Sweden I asked my mom if she could find out if I could get my vaccination in Sweden despite the fact that I have emigrated.

Turns out I could! The hospital even had a certain date (December 23) for “Swedes living abroad/emigrated Swedes” to come in and get their shots (and despite the fact that we are no longer in the Swedish system and receive no social security it was free! Cheers). Unusually enough, there was a rather friendly atmosphere in the hospital’s waiting room?!
Take bunch of Swedes that don’t know each other and put them in a room and there will be complete silence except for the sound of people flicking their magazine pages. Take a bunch of emigrated Swedes, who have been living elsewhere a great deal of their life and feel happy, yet a bit confused about being in the “Swedish system” and meeting so many fellow Swedes again, and you’ll get a pretty nice atmosphere. At least that was the case at this hospital’s waiting room. People were chatting aimlessly, and I ended up exchanging travel anecdotes with an old Swedish couple who’d been living in the UK for 25 years, as well as with another couple who’d spent a few years living in Ukraine before moving to Latvia.

The shot itself didn’t hurt, and I felt great until later that day when I got a fever and started to feel kind of fragile. (This is apparently how the body reacts in some cases against the vaccine: you get a mini flu). The next day (on Christmas itself) I felt as if I had a flu and despite eating painkillers (which I had been recommended to do) I still felt weak and tired, however, the biggest surprise was my appetite. I simply could not eat that much, which is highly unusual for a food lover as me. So, while the other ones were unbuttoning their pants, rubbing their bellies and fighting for the best pieces from the "Aladdin" chocolate box, I was full after 3 meatballs. I think this Christmas will go to history as the first Christmas ever when I did not gain weight.
Posted by Jonna Wibelius at 4:50 PM

Only three meatballs and you were full? Wow! I'll bet all that other food waiting for you to sample it was envious of those meatballs! I sure hope you feel better soon, Jonna... hopefully in time to help eat all the leftovers. :) Take care and Happy Holidays!

I got my vaccination here last week. No idea how it was arranged. I just got a message from the school I work for that simply said, "Do you want to get vaccinated tomorrow?" I'm not really worried about getting it, but I don't want to spread it to my students. I was told not to ride the bus for three days after I got it, but I never did find out why...

Did you ever consider if that shot was necessary to take?

Interesting. I got the swine flu quite a few months ago. Don't know where I picked it up. By the time we realized what I had, I was already recovering. My temperature spiked pretty high and we almost had to rush to the hospital. Not sure if I should still get a vaccine. Shouldn't I already have natural antibodies for at least a year after having the actual virus?

Thanks for the interesting look into the Swedish emigration system. When you're from the US, those bastards never take you off the books. No matter how long you live outside the US, you still have to pay taxes and if you don't file your tax return you can be fined and / or imprisoned. Great right? So you get to pay taxes and get no benefits from the system because you're outside of it. Even if this healthcare bill passes, I bet I can't use it abroad.

That is so cool. Yet another reason why I would move to Sweden if I could.

It actually makes a lot of sense to provide you with a shot. If you don't get vaccinated, you're a risk to contract the virus and spread it to others.

I finally got my shot about 10 days ago. It has been limited to certain at-risk groups until recently. Parents of babies was one of those ... but since our baby isn't due until January, I wasn't technically part of that group.

One of the writers on our staff wrote about his experience with H1N1: