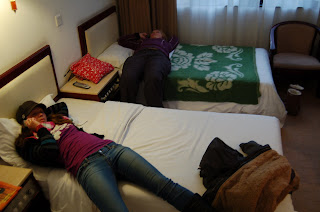 Don't call for the sake of calling

Never try calling someone working for a company unless you know their full name. Chances that you are going to get through their receptionist are slim:

This I learned some weeks ago when I tried to get hold of a marketing manager of a Swedish company based in Shanghai. The receptionist told me “he” (that later turned out to be a she!) was out and that she didn’t know what time “he’d” be back.

I tried other people:

-Somebody else working with marketing?

-Some Swedish person working there?

-At a business trip. Would be back earliest in 2 months (!).

-In a meeting all day.

I soon realized it was useless. It didn’t matter who I asked for –even the cleaning lady was completely unavailable since I didn’t know her last name.

I had two other people calling trying the same thing before we all gave up and decided to call the head office in Sweden. Via them (because there, surprise, surprise, you can actually talk to people when you call!) we got the name of someone working in Beijing, and via the Beijing woman, we finally got the name of the marketing manager in Shanghai. Next time I called I got through straight away. And when I went for a meeting there one day later, I miraculously met several Swedes working away at their desks:
-Oh, recently got back from your trip?! I inquired.
-Trip? They said, looking at me as if I was from another planet.
In other words: don’t try calling someone working over here unless you know their name. The receptionists can be quite tough, working like a spam filter and only letting through those that are “inside enough” to know who’s doing what.
Posted by Jonna Wibelius at 7:05 AM

I've been in a lot of situations where I couldn't even remember the name of the person I was supposed to be getting in touch with, just their job position, or roughly what they did.

I don't know how business would get done unless receptionists acted as enablers, rather than blockers, in the US.

Good thing you weren't on a deadline.

well I guess considering the amount of spams you get in China they have to be like that no?

and rather than receptionists being tough, I think its company policy.

Brad -that's what I'm saying!! Hard to make a new contact over the phone over here.

Anonymous -yeah, that has to be the reason. Otherwise it would be kind of odd.

Anonymous -I understand that they can be harsh/have it as a company policy, but maybe she could have been a little bit more helpful, like maybe offered to take a msg or something like that? It's kind of hard to ever get through if u never get to speak to someone.

Why not just pay their office a visit?

Well here in particular the Philippine Health Insurance Corporation,you can't call them even if they have hundreds of extension lines at their head office. Unless you get to email them some complaints you may have in which case you can expect them calling you instead pronto.
Also one good thing having a blog is that I can get to write all my frustrations dealing with those kinds. Good theraphy for my nerves.