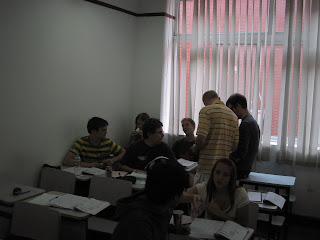 Yesterday, despite it being Sunday, we had out last Chinese lessons before today's exam(s). Although the lessons weren't compulsory (are they ever when you choose to study for your own sake rather than the grades?) our teachers had told us that it could be a good opportunity to turn up and get all those questions that we had answered. Since I am known for questioning a lot of things I was one of the first ones to walk into our cold, badly lit up classroom yesterday morning at 8.30 am, where the class' whizz-kid (a Japanese girl who scored Level 8 -!- on the previous HSK test we did. We all refer to her as 'the prodigy' nowadays. Although she doesn't understand English she still looks flattered every time she hears it) were already seated at the front desk.

Minutes passed. Students dropped in. Being polite and never questioning things, no-one said anything about the missing teacher. In fact, it was only me who wondered where on earth she was, and felt a bit annoyed with the fact that I had left my cosy bed on a Sunday morning only to enter a teacher-empty classroom? So, after 30 minutes of sitting in the classroom with my happy-to-just-chat-away-classmates, I decided a little text reminder couldn't hurt, got the number to the teacher, and typed:

"Not coming to class today? We are all waiting for you."

Twenty seconds later (she is clearly a fast typer!) I get this:

"My Gosh! Give me five minutes!! I'll be there immediately"

I sensed the panic and couldn't help but feeling a tad bit guilty. Four minutes later (she's fast indeed, this is the first time a Chinese person tells me 'immediately' and actually means it) she stormed in, panting heavily, and ran straight up to me:

-What do you need help with?! she said, in between catching her breath. I am so sorry, I just forgot that we had a lesson today.

Once the lesson had finished (and a relieved looking teacher probably went back to bed) our second lesson started. We could sense that this teacher (who was perfectly in time) really wanted us to finish the chapter we were studying in no time, because he rushed through it. Once the bell rang he decided it could be a good time to tell us what tomorrow's (as in, today's) exam would be about.

He started off by writing down the chapters involved. Chapter 54-59. We had just finished chapter 60.

-What about what we learned today, a star-student asked.
-Oh, that's just a bonus, he smiled.
-Not in the exam? Someone else said, with a kind of high-pitched voice.
-Not in the exam! No need to worry.
-But... but.... we studied it?! the star-student tried. Shouldn't it then be in our exam!?
-No... I think it is better we repeat a chapter from before than adding all this new stuff.

The star-student, the whizz-prodigy-girl and some other A-students looked completely gobsmacked. It was only me who was smiling like a sun. I was just about to turn around to the Korean girl sitting behind me and tell her what a relief it was to have one chapter less to study tonight, but she beat me to it.

-Doesn't that sucks?! She said, rolling here eyes. Here we have been preparing chapter 60 and it is not even in the exam!
-Ehum... sucks?! I think it's sort of exc... I was caught off guard when I saw her accusing look.
-It SUCKS indeed! I said, making sure to add a convincing, angry nod. I have also prepared this chapter so well! There. I am one of them.

Holy crap. People take their exam preparations seriously over here. Maybe I should to? OK, from next semester onwards, I'll try. No really, I will.

Anyhow, today is the big, D-Day, and ready or not, here I come.... I hope that I have at least prepared the right chapters...and that our teachers all turn up. Best of luck to me. Something tells me the others don't need it.
Posted by Jonna Wibelius at 8:33 AM

Good luck! You go knock their socks off!

And I don't see why you felt bad for reminding the teacher to come in. She had promised to come to class and you were all waiting for her. If she felt bad about that, well, she should, shouldn't she? Wouldn't you? And if you forgot an obligation wouldn't you want someone to remind you so you could at least fulfill part of it?

Good luck again! I'm sure you'll do a great job!

I probably would have been annoyed about the chapter 60 thing two. I'd hate studying a whole chapter that wasn't going to be on the exam.

My classmates are also really serious. I just go and take it easy, and take away whatever words and sentences interest me at the time. Everyone else is soooo serious, studying away like crazy. It's like they were in the most important exam of university, every time!

Cheers and good luck with chapters 56-59.

Flyingfish -you are always so full of encouraging words!! :) Thanks! The exams (listening and grammar) went OK actually! Tomorrow I have my final exam and then I am done... for this semester! I am really looking forward to studying on my free time for the sake of learning, rather than just trying to push everything into my brain for some exams.

Tripfriend -I guess that means that you are, unlike me, a very well prepared student who prepares the chapters BEFORE the night before the exam... (like I do). Good on you, like really. I have tried that all my life but it is not in my system. Same as writing blog posts in advance... impossible?! I have to do them in the last minute, with the toothbrush hanging out of my mouth, one leg in my pants, halfway out the door as I should be on my way to uni... I guess I work best under pressure. That being said, I really admire people who don't.

Adrian -I would lie if I said that those bright stars in my class don't affect me... because they do. I constantly feel like the class' black sheep. The one who cannot read as well as the others, the one who definitely cannot write as well as the others, and the one who speaks... well speak we rarely do in class so no chance for me to show off here even if I could?! Well anyways, I am sure you know what I mean :) Studying is real serious stuff over here.

Rofl! Again I'm sitting here with a huge grin on my face laughing about your situation :P