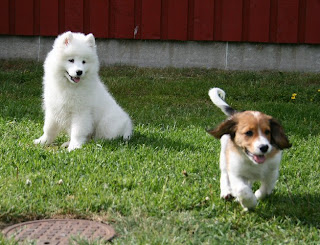 I've been nagging about a dog for god-knows-how-long-now. I come from a family that has always had dogs. All kinds: the small barky little, sit-on-your-knee-kind, the large, friendly, hairy Golden Retriever and the constantly hungry Labrador. On top of the dogs we've also had cats (the max being 2 cats and 2 dogs at the same time). And then a total of 4 children. (making me think that our neighbors must have considered our house to be a minor street ZOO when we were all growing up). My boyfriend also comes from a dog-loving family (they are currently hosting three large Samoyeds) so the reason why he won't let me get a dog isn't because he doesn't like dogs, but because we are in China. And sure, I know that he's right. It's not fair to get a dog here because once you decide to move home, the dog has to go through a long and painful plane ride, and if you thought you were the one a with limited amount of leg room then think about the dog. Besides, we are not allowed to have a pet in the complex where we live. And so on...

Sometime before Christmas I was so bitter about not getting a dog that I blamed my lack of long-distance running training on not having a fun running companion (although my boyfriend offered to run with me I declined and claimed he was too slow for me... gosh, what a load of bulls***?!). So, when we met up in China after Christmas he opened his suitcase and said: "Hey Jonna, I've got a little something for you...!" (making me first jump with joy before I got annoyed: we had decided NOT to exchange Christmas gifts this year?! We were supposed to be all frugal and stuff because of the credit crunch).

Since he'd already bought me something I obviously couldn't NOT take it though. So I reached out my hands, closed my eyes, and when I opened them I saw it: a Polar FT 80 watch. A fancy schmantzy high tech heart rate monitor for the serious runner. Ask for it to measure something and it does: distance: check. Calories burnt: check. Time: check. Km/hour: Check. Average speed/heart rate: Check.

The thing has a GPS as well as a system that saves every training result, adding them all up and sends you little messages at the end of each week, telling you about how you're going and what you should improve/concentrate on during the following week (so far it's been very friendly to me, telling me that my 'maximal training is improving' and that I am doing way more running than I should be). Even though I initially was a bit suspicious to the thing, I have to admit that it makes running a whole lot of more fun. It's almost as if the fact that you can see your results makes you instantly want to try harder, run for longer and go faster? Silly, I know, but that's the effect this HR monitor has on me.

Being such a fancy little gift, I quickly sensed that my boyfriend hadn't only bought it to boost my weekly mileage, but also to use it himself. IF we don't go running together that is. Because if we do, the GPS sits on my arm. Last time we went for a jog together I noticed that he was constantly looking at me, making me kind of nervous. What was wrong? Did I have a large spot on my top? Was I wearing my pants inside out? Was snot coming out of my nose?

-What's wrong? I eventually asked.
-Oh, I am just concerned to see how everything is going...
-Ah that's so sweet... I am fine thanks, no stitch or anything.
-Well I wasn't talking about you. I was talking about the HR monitor! Has the GPS found its satellites? Is the green light blinking? Did you press the right buttons?
-Oh...

So... we might not get a dog this year, but our new Polar FT 80 apparently does a good job as a substitute, making running more fun (for me) and turning us into more caring people (well, at least one of us). As long as my boyfriend doesn't let it sleep in the bed with us.... 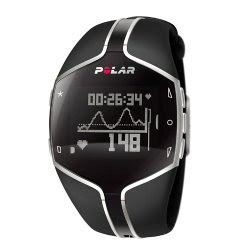 Posted by Jonna Wibelius at 8:21 AM

Looks like ur bf is more techy than an animal person! That's a cool gift IMO.

Yeah I'm quite happy about it. But once we move home the first thing I'll be getting myself is a pup. A real one :)

Atleast you have a good idea of what to get him for christmas next year!
My husband and I have a big baby (85lb dog) back at home. We don't have children so our dog is treated as one. It was the hardest decision I ever had to make to leave her with friends (sounds silly I know), but I felt bringing her here would just be selfish on my part. I miss her terribly. She is such a big dog and loves to run, swim, and go boating! She gets to do all of those things at home. Shanghai is really not ideal for a big dog. Plus I am embarrassed to say...she is a little racist. She never barks at anyone...except asians. Strange.

... and you claimed your boyfriend wasn't very romantic!

njd -gosh, it must have been awful to leave your dog behind (a dog is like a baby! I'm still not sure if I ever wanna have kids... just know that I wanna have dogs!) But I agree with you -shanghai isn't really that dog friendly. I bet she'll be thrilled when u go home to visit her?!

Woai -Hm... I wouldn't call this a romantic gesture. Although I guess it could be seen that way. Well, he's great in his own, Finnish way of course :) And I love the polar watch! :)

Men's romantic ideas are translated differently by us ladies! What your friend did for her bday was great! Except if you think about it she can't wear her bday everyday on her wrist now? ;-) So let your bf express differently and praise them little by little and I am sure the future is all good!!! It's like a training process.

Ps. I hope he is not reading this right now! Haa haa!

Miss Jane -he claims that he reads it every day... let's see if that's true and if he makes a comment about your comment ;)

I have to ask a delicate question. Is dog meat on the menu. I say that because Ive seen dogs stuffed in crates worse than chickens. I wouldnt eat horse but the Japanese do. I eat cow but an Indian wouldnt.

Jim -I've never seen dog on the menu in Shanghai or Suzhou. In some parts of China (and Korea) they eat dogs though. Since I have no interest in eating my fave pet I am not interested to investigate that issue any further.

I have seen dog meat dish on the Menu in Suzhou. The restaurant is Gang Tian in SIP. I think the one in Gang Tian is a soup. I have talked to many Chinese friends in Suzhou and understand it is a common dish. I have not tried it and do not know if I will, but all my local friends that have tried said it is excellent.

Ride China -thanks for the info. Now I know one restaurant that I won't be visiting, ever!