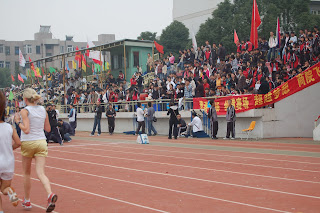 Last wknd in Shanghai I went to a large department store on Huaihai Lu to get myself a mascara. I don't often buy make-up and never go for brands, except for when it comes to buying mascara. Then I get myself one from Elizabeth Arden.

I walked over to the usual, Elizabeth Arden counter where two sales girls were standing and explained what I wanted.

-Here are the mascaras, they said and pointed towards the make-up.

I noticed that the make-up counter had a new, more expensive kind of mascara than the one I normally buy.

-Do you have the old one still? I said. I would like to buy that one.

The sales girls looked at each other.

-This is the new one! It's really good! You should try!

Thing was, I wasn't up for paying more than I already pay for my mascara. And I wasn't interested in trying something new.

Soon, she came back with what looked like a gift package (which was in fact a plastic toilet bag with stuff in it) with a mascara, some lip stuff and other make-up that I neither wanted nor needed.

-This one?! She said and waved the toilet bag in the air. It has your mascara. 400 kuai! Okay?

-Eh... no. I only want to buy the mascara. Is that not possible?

-If you don't want to buy the gift package it is not possible. 没办法  (mei ban fa -there's no way)

I looked at both girls. They seemed like sweet, nice people.

-Are you sure it is not possible? I really really REALLY want to buy this mascara and I always come to this store to buy it. Can't you look in your drawers if you have some old ones left that I can buy without paying for that whole gift package? I forced a big smile.

The girls exchanged looks. Then, one of them went over to a drawer, opened it, and took out a package of the old mascara that I wanted to buy.

Yes, there I go. Some nagging, some extra asking, plus some friendly interaction and... taaaa daaaaaa: 没有办法 mei you ban fa = 有办法 you ban fa (Not possible = possible).

Same things happened when I turned up to run the women's 3000 m race at Suzhou University's sport's day. Since I didn't have my health certificate in order I was told I couldn't run.

-But my other teachers said I could! I tried.

-Sorry, without your health certificate it is impossible. 没有办法 (mei you ban fa), said the man in charge of the race registration.

30 minutes later I came second in my heat of the women's 3000 m race... without having presented them with a health certificate.

Impossible is nothing. At least not in China.
Posted by Jonna Wibelius at 8:48 AM

Exactly, I never used to be pushy but since moving here I challenge EVERYTHING and insist forcefully:

WoAi : Can I have some fried broccoli?

Waitress : No we don't do fried broccoli.

WoAi : Yes, but you have fried beef with broccoli. Just give me that, but without the beef.

It's the only way to get anything done.

I hate the word 没办法。

It is simply that there is so many lazy Chinese people who dont want to work more than they have to.

Customer service is something most Chinese people could learn.

Or, as PRESIDENT Barack Obama would say, "Yes we can!" :)

Funny. I totally see your point about going that extra mile to get what you want. I never do, and it's stupid of me. I just get mulish and "fine, be that way," and leave. Which after all only ends up leaving whoever I'm dealing with as smugly unhelpful as ever and me fuming and having arguments with them in my head.

If you can conqueror negotiation in China you can go far in life in any other country. Just don't go to India after!

Woai -true true. Some days I just cannot be bothered though. It takes twice as long sometimes just to push/insist/be a pain in the a***/get what u want.

Flyingfish -actually, it's not until recently that I've started to push a little bit more to get what I want. I used to be like you, just going 'Aha, well that's a shame then' and walk away... but I've been inspired by watching Chinese people doing insisting to get what they want, and actually get it... U should def try it. With your Chinese language skills I think it would be a piece of cake!

Miss Jane -India?! Naaah, never. It would be like starting all over again....

Sounds like not much has changed in China when it comes to customer service since I lived there for a year in 1985. The iron rice bowl mentality hasn't died out yet. When I was there they were still poor enough that if they did have something you wanted in a window, it often wasn't for sale but for show.

I agree with Emil - customer service in China is lacking - they are sometimes sneaky and out to get the "westerners"!

Found your sight through blogs of note s- love it!

China is a place required a lot of bargaining work. The country is poor, ppl just want to find a way to make $$ by selling more expensive items.

this is how it works in China.

hi, this is my first time visiting, I came from the blogs of note.