Game time with the guards 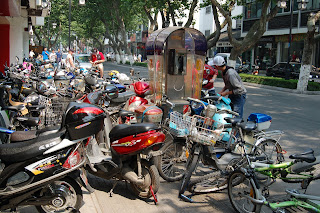 Bike parking in China.. not always so organized...

I live in one of those fancy looking complexes that has about 468634863248 Chinese guards working 24-7. I have felt sorry for them since I moved here. Their job must be one of the most boring jobs there is. There are always at least 4 of them at every gate, although only one can press the button that opens the gate so that cars can drive in/out, so the other three are just standing there. Or, OK, sometimes they ask where the car is going. But that's still only work for two people (that one person could have easily handled. Pressing a button doesn't require that much effort, after all), meaning that at least two people are just standing there, with their backs straight, staring blankly into the air. Anyways, seeing how little they have to do, it doesn't surprise me that they have to dig deep into their minds to come up with something to do to make time pass.

For the last 4 or so months, they have taken a special interest to me and my bike. In fact, we nowadays have this sort of game that we play, that is called: "hiding Jonna's bike" or, "making it hard for Jonna to access her bike in the mornings."

It's a fairly simple game, with no specific rules, and it goes like this: when I come home, I park my bike somewhere at the large bike area that belongs to our building. I always try to go for a quite open spot, as I know it can get really crammed by the time everyone else has parked their bikes/ scooters/ electric bikes/ mopeds/ you name it (anything with two wheels goes here).

Then, the next morning, I come down (normally in a big rush as I tend to be late -a result of me being a morning blogger), only to find that my bike has been moved. And then the game starts! I have to locate my bike that can be anywhere within the bike area. Normally there are at least two guards watching me, smiling discreetly, while they are pretending to be busy arranging some plants (?). The first time we played this game I wasn't prepared (you see, they didn't really notify me), and when I realized that my bike wasn't where I'd last left it, I sort of panicked, thinking it had been stolen. It was pure luck that I (on my way to walk to the gate and try to get a taxi to school) spotted it and realized that it had been moved.

Nowadays, I know that the bike won't be where I last left it, and to be honest, it's not that hard to find (I think my maximum search time is something like 3.5 minutes). The guards have also noticed that, so now they have engaged in a new game, that I don't enjoy as much as the other one. This one is called: "making it as hard as possible for Jonna to retrieve her bike" and it goes like this: over night (or whenever I am not there) they put my bike in a little corner, that fills up with scooters, bikes and you name it... when I come to get it in the morning, it is close to impossible to get to my bike unless those scooter owners have left before me (and normally they haven't).
I'm not too fond of this game, especially not when I find my bike crammed between two big, fancy looking scooters (with those annoying alarms that sets off if you just look at the scooter for too long), and bikes both in front and behind it. There have been days when I've been thinking: "No way, I'm never going to get that," but then somehow, it always works out. Either I do a brave, lifting-my-bike-attempt, while setting off fancy looking scooter's alarms. Or, sometimes the guards take pity on me. They see that I might not have gotten my 7-hours-beauty-sleep and that I am not in the mood for game playing/bike lifting and loud alarms at 8am in the morning -and therefore they decide to help me by getting the bike for me. Every time they do I get all grateful and thank them about 100 times, and they look all proud and happy, even though I know it is them who put the bike there at the first place. But, I can tell it makes them happy to feel useful, so I never make a fuss about it. I mean, if I was working at that gate, I would probably start hiding other people's bikes too.
Posted by Jonna Wibelius at 8:43 AM

That was one of your best posts ever! Good luck finding your bike!

Ha ha ha. I bet most guards do get bored. MY complex doesn't have that many. Only one or two at each gate, and a couple wandering around. Probably about 16 guards here at a time. They're fairly relaxed though. The smile and nod at me when I leave, and sometimes I see one setting off firecrackers with some kids. One of the other foreigners says he even has a few beers with a guard by one of the gates on occasion.

They don't really DO much, but I do feel a bit better having them around.

It's great they have a sense of humour. It'll be funny at new year when u give them red packets filled with toy money!

Haha, yeah guards. I asked a friend once why there is no female guards, and she responded that I would be extremely dangerous! :D

I bet there is wild car chasing involving big guns while I am sleeping.

Jonna, maybe it's just a bad pick-up attempt ;) My co-worker left her bike outside of our company gate once and it disappeared - turned out one of the security guards moved it inside for her as it was getting dark and he didn't want it stolen. I agree with WoAi, maybe you can give them red packets with kronor, only with the kronor glued to the inside of the envelope :D

Flyingfish -thanks! Yep, it's a little adventure of its own every morning here in Suzhou! ;)

Tripfriend -They are indeed really friendly and helpful if u ask them for something I just don't understand why there are so many of them. It's like one guard per person living in this complex? (no, now I am exaggerating, but u get the point?). I am not sure if I feel much safer having them around. They are all much shorter and smaller than me... :/

Woai -hehe. Yeah, give them an envelope and then have the camera ready to snap their (probably quite priceless) expression... :)

Emil -don't forget the cowboys and indians that they have to chase from the gates every night... China's getting wilder by the day.

bkbj -naaaah... I don't think so... I think they just want to feel useful. Quite good work spirit I would say!

This happened in Shanghai, China. Unbelieveable a family maid would hurt a baby like that!

Time for you to play games with the guards...might cost you a bit of money, but its only going to be a small bit of money....

Take a coin, put some superglue on it and drop it on the floor where the guard can see it, with the glue facing down. Step on it for about 30 seconds and then walk away and see what happens.

Or just superglue your bike to the floor!

Oh my goodness! lolll You're such an understanding person... I don't know if I'd have that much patience!