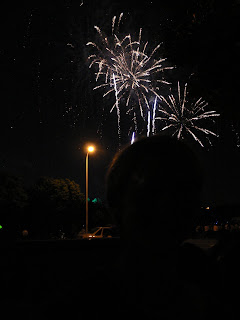 Yesterday we were invited to a surprise birthday party. It was my Indonesian girlfriend turning 29 and her boyfriend had arranged for all of her closest friends to meet at a Thai restaurant (Thai by Simon in SIP, Suzhou -not bad!) that she's been wanting to go to for ages. I love surprise parties and her face expression (when she saw all of her friends there) was obviously quite priceless. After a yummy dinner we had been told that we were going to a bar at Suzhou's rainbow walk to eat birthday cake... So we all set off. Once at the bar there was a band playing and after 30 minutes of innocent tea/beer drinking, the band suddenly started playing "Happy Birthday." Then, one waiter carrying a giant chocolate birthday cake, another waiter carrying a large bouquet of 29 red roses, and the whole band came over to our table where they started dancing and continued singing and made sure that the whole bar was singing along. Over the top is an understatement. My friend looked more than overwhelmed!

After stuffing ourselves with cake (the good kind -and her favorite from the Taiwanese bakery '89 degrees', of course) we all went outside as the boyfriend had yet another surprise in his pocket... yup. Fireworks! LOADS of them. Only for her. And then... a 'lucky/wish lantern' for her to write her wish on, light up, and then set off into the sky. Me and my boyfriend just stood and watched, completely blown away by the amount of stuff he had arranged. None of us spoke on our way home. I guess we were both thinking the same thing: we have some things to learn! 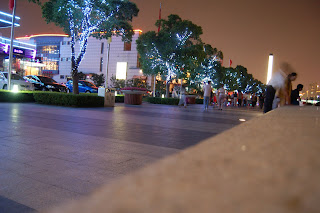 Suzhou's Rainbow walk
Posted by Jonna Wibelius at 9:41 AM

Maybe that's why I see fireworks over Sydney harbour even when it's not a holiday...

Wow! Your friend's boyfriend is a great guy. Is your friend pretty? Sorry to be so cynical. :) I know guys would do anything for a pretty lady.

Pingu -in my opinion the fireworks were a bit over the top, but I liked the lucky lantern! (and the cake..mmmmm... chocolate!)

Anonymous -she's a lovely, cute girl and he obviously adores her.

I know Jonna. There was a tad of sarcasm there ;)

I agree: I love the lucky wish lantern, but I wouldn't want the other fireworks, or the whole bar singing along. I don't think it's too much in any objective way -- I guess I just think people have different likings. Some people love extravagance and think it's really romantic. Nothing wrong with that! But if you and your boyfriend are a little more low-key, there's nothing wrong with that either! I guess all I'm trying to say is, maybe you can admire what your friends do for each other without feeling that you have to be the same way?

Flyingfish -Of course! I found it highly refreshing to be part of this birthday crew.. and the guy's efforts were impressive! I once arranged a surprise bday dinner for my bf (simply a dinner, no fireworks, lanterns, cakes or singing...) and that was a big hit, but I don't think he'd ever do something like this for me.. he just doesn't have it in him. Nothing wrong with that, that's just his personality I guess. It's nice to see that some people are still real romantic though.

So money can buy romance? I wonder how much that guy spent on her.

awwwww that is so sweet.
moments like this I actually wish that I did have a steady boyfriend instead of random plays.

Is there a brother to the bf of your friend? :D

anonymous: I don't think fireworks or lanterns are that expensive here in China. The dinner was quite low-key too... so no. I don't think he spent a fortune. It just took a lot of planning and arranging.

Shopgirl -yeah, he definitely raised the bar for any following birthdays that me and my bf will be celebrating together.. hehe.

Miss Jane -Yeah, makes u wish there was, doesn't it?!

Jonna, how do you go about arranging fireworks? I've heard of people hiring planes to do skywriting, but not fireworks. Perhaps the fact that fireworks are no longer legally sold to the public where I come from explains it, but still, I've never heard of it. Did your friend's bf buy them and light them all in an open field or something?

Adrian -fireworks are not illegal in Suzhou.. so people here use them all the time. It's like an activity, just like 'going to the pub'. They bring the family, head for Jin Ji Hu and set off some fireworks on a Sunday night. Quite odd but they love it. I am personally not a fan of fireworks so I rarely enjoy watching them.