China must do: move fast 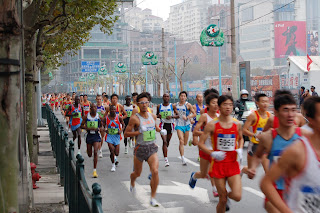 Better move fast or someone else will take your spot

I was supposed to go to a job interview this Friday. I was called (via an email) during my ”wedding week” in Sweden and felt kind of excited.

Then, four days later I suddenly received the exact same email as I had already gotten, only though the date had been changed. To the upcoming Saturday.

I immediately replied saying I couldn’t make the 24 since I wasn’t in China, asking why the sudden change.

Reply: “We would be excited if you could make it to China for the interview.”

I again stated it was impossible asking if I could come any other day.

And of course, I got no reply.

Once back in China I did some phone call attempts but I kind of already knew it wasn’t going to change anything. In fact, all the promised “we’ll call you back!” was never put into practice.

In China, you better be ready to move fast or you lose out on opportunities.

And when confronting/forwarding a slight complaint about it all, don’t expect any response.

I wonder if the company you are applying for is a large or popular one. If so, you might not get a reply. I know several people who both work in large companies, or have applied very often to large companies in Australia, Singapore and Hong Kong. It's not uncommon that calls may not be returned, especially when there are a large number of candidates. If you're on the short list with 2 or 3 other people, then sure, they're being bastards. But there might be 50 others, so they'll simply forget you and simply cull you from the list.

ps: did you do your 1 hour presentation yet?

Adrian -yeah it was a big one, so I guess I shouldn't be surprised. what surprised me though was the sudden change of date.. that didn't feel very "pro"... anyways, no biggy, I'll just keep searching for something better.

As for the presentation.. nah, haven't done it and dunno if I will either. I've been a bit short of motivation lately, maybe you've noticed on my blog post. Don't know how long I'll stay in China anymore.

You're considering moving out? That's news. Even if you just said that on a whim, would be curious to know where you'd like to head next, considering you're pretty adventurous with these things. :)

We'll certainly miss our dose of China if you leave. Anyway, goodluck to you. Maybe your trip to Sweden made you homesick.

Anush -the future is a blank page right now. Not sure where I will go. I'll let u know when I know myself. Not sure if it will be an adventurous move though, I haven't felt the need to be adventurous lately.

You are always welcome in Australia, Jonna, there are boats leaving daily from Indonesia and Sri lanka ....

Jim -thanks! I wish it was that easy though. If Australia didn't have so high working visa requirements I would already be on my way...