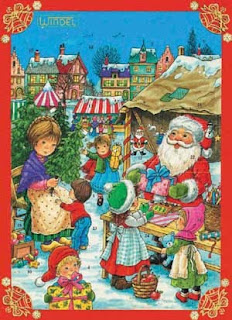 I did my first (and maybe also last?) Christmas deed last night when I went to visit the 2 Korean families whose kids I tutor. I had sent after 3 chocolate calendars from Sweden, which I now all Santa-like handed over.

-Wow, thank you miss Jonna! (I love how everybody here calls me “Miss Jonna”) Although… I better hide it… otherwise my little sister might steal it…

-Don’t worry I brought one for her too.

-Oh, but she’s still going to steal mine. She loves chocolate.

-Well maybe you can let your mom hide it for you?

-My mom? Oh no. My mom loves food too. I’m sure she’ll eat all the chocolate if I
give it to her.

-Eh…. Right. You better hide it yourself then.

Her little sister (5 years old) was as expected, overjoyed.

-Thank you thank you thank you! She yelled (it’s about all she can say in English) before she sat down on the floor, ripped off the plastic, opened it and started munching on the chocolate.

-YUUUUUUM! Came from the floor.

Too late. The girl had already eaten three days of chocolate. Imagine my surprise when I realized that her mom, sitting next to the little girl, also opened one box and ate some.

-Guys, it’s a calendar?! It’s supposed to be a countdown to Christmas? You eat one piece every day?

Useless. Oh well. At least they looked happy and thanked me about one million times.

Up next was Korean family number two where I tutor a 7-year old Korean boy called Ricky. He’s adorable but very mischievous. I was expecting a bit of a fight with him in order to not get him to open the calendar on the spot.

To my big surprise, however, he was unusually calm. I gave him the calendar and told him it contained small chocolate pieces, and that he was supposed to open one “box” every day, number 1 on December 1 and so forth. He listen carefully before he took the calendar and handed it back to me.

-Sorry, I cannot take it. Mom will be angry if I eat chocolate every day.

-But it is just a tiny little piece! I tried.

-No, mom will be too angry.

Wow, kids?! I have to admit; I didn’t have much experience when it came to small children before I started seeing these 2 families here in China. I’ve never really been into kids, I never played with dolls when I was a kid myself, and I kind of always preferred puppies to babies… However, after 2 years with these Korean kids, I have to say I am starting to kind of like the idea of them more and more. Most of all, they are hilarious because they are so unpredictable. They never react the way you think they would.

Anyways, I have one spare chocolate calendar at home. Anybody who lives in China who wants it? Come up with one good reason and email me your address (jonnawib at yahoo.se –remember, you have to live in China) and I’ll send it to you by mail this wknd.
Posted by Jonna Wibelius at 8:08 AM

Jonna, I am your loyal fans. The first thing I do every morning is to read your new post. And, I love choclate very much.

Is this a solid reason for getting your choclate. Haha!!!

Did she say live in China...or was that live in Canada, but visit China?

I love the idea of a chocolate calendar. I'm sure my husband would eat it all like the little Korean kid. :) Ahh I don't live in China though. Good to see you spreading the cheer.

I'll probably buy us some this year, too. Tho I'm pretty sure you should be able to find those in an import shop in China. They sell them in Japan, so I guess China has them, too.

I remember what a joy it was to receive one of these calendars. I'm from Romania and they are not a tradition in here, but many of us have relatives or friends in Germany so we got to meet the choco calendar. Except no one really explained us at that time that we were suppose to eat it 1 a day and come to think of it, this wouldn't have made a difference. Nonetheless it made us extremely happy. It would probably still work! Too bad am not eligible for yours.

thank you!I am a chinese boy who live in the middle of china,I like studying english,in fact,your passage help me much,because your funny story attract me to read english everyday,haha! through your passage,Ican know a very different world,thank you very much again!I like reading your passage and I had kept read it for a long time,because your passage is very different from chinese style,and i begin to write passage in english in my qzone under your influence.reading your passage,Ifeel the world is really small,because i can read your passage,leave your comment,you can also read my comment,I feel I live in a dream,if I can get your choclate,I know the dream is really true!Haha!I know you like travel,and I live near the shaolin temple,which is a very famous spot,so I invent you come here and as your guider,if i could see you live,I konw the world is small again!no matter if i could get it,I will also read your passage,but I really want taste it!haha

I live in china for so long time,do you have a QQ?can you tell me,you know,i am a student and QQ is more popular than MSN or ICQ among us young.~@^_^@~

I forget yo tell you my address,in chinese:河南省郑州市登封市嵩山少林武术职业学院本科部英语一班 post code:452470 my name:宋文龙。I will try my best to write it in english:china zhengzhou dengfeng the college of songshan shaolin wushu Bachelor english class 1.I am waiting for you and your chocolate!haha!

When my family lived in Germany we would get these calendars every year. It was always torture to not open more than the current day's box, but I loved those things and I miss them!

I wonder if they're available in the US now? I never saw one there. Definitely haven't seen them in Singapore. We did buy a regular box of Cadbury chocolates today at the grocery store though. I'm looking forward to digging into that!

Thanks for all the comments!! The calendar goes to Nicki from Hainan this time!!