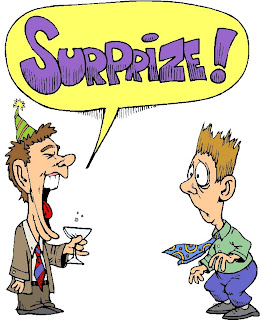 Forgive my absence. I was quite busy last week trying to get everything together for Friday night… which was the night we had a surprise birthday party for my significant other. I’ve planned this party for weeks and I had decided to have it in our flat to keep it personal and in order to really surprise him.

I had invited around 20 people (80% men) and I had decided to be a real host and offer all guests food, snacks, cake and drinks. This all sounded great when I sent out emails, informing everybody about “the big party,” however, when I realized how much work it is to cook and bake (not to mention to buy all the booze and beer) for 20 people, I was kind of overwhelmed. It took numerous trips to Carrefour/Auchan/other supermarkets to find everything I needed. Since I also skipped ordering one of those tasteless creamy cakes that all the bakeries down here have (out of personal, selfish reasons… I simply cannot stand the taste of cream… yuk!) that gave me some extra baking work. However, I made 3 super moist chocolate cakes (or more like mud cakes because they were so soft and yummy) and everybody loved them, so in the end I believe I made the right choice (although I wasn’t so sure of that when I was panicking in my kitchen earlier that day: two cakes in the making and another one in the oven).

I also ended up making enough food to feed an army, seriously, I don’t know what I was thinking?! I guess this was the first time I arranged something like this, and since I was so scared of running out I went completely overboard. We now have enough food to eat 3 big meals each day until Christmas. Oh well. At least no one had to leave hungry…

I had prepared some things in advance (like buying some decorations: balloons, glitter and you name it + disposable plates/mugs, some snacks etc) that I had hidden at various places in out flat. When Friday came I had to spend 1 hour looking for everything… Geez, talk about outsmarting yourself?!

The plan was this: I had told my boyfriend I had to go to Shanghai for fitting work both Fri and Sat, and that I would therefore spend the night in the city. Then, his gym buddy (who was one of my most important partners in crime when it came to this party) asked him if he wanted to have a Finnish action movie night (!) after their Friday night gym session. My boyfriend agreed, and when the gym buddy said his DVD system was broken, my bf said: “well, Jonna is off to Shanghai, so we can be at my place!”

Meanwhile they were at the gym (my bf always goes straight from work to the gym) all the guests arrived (although I had literally go outside and get them, because everybody got lost in our little “garden”). We then “waited” (= all the girls helped me decorate and all the men drank beers) for about 20 min until we got a signal, turned off all the lights, hid around the flat and when my bf opened the door we did the big: “SURPRISE!” thing, followed by “Happy Birthday!” in various languages.

It was great. I have always wanted a surprise party myself, so doing one for someone else was a lot of fun… although not so much fun that I would do it again. Man, the nerves! I was so nervous that whole day (that my bf was going to somehow find out/that the guests were going to arrive late/ that the food wouldn’t be enough/ that I wasn’t going to finish in time… etc etc) that I couldn’t get any food into my stomach. When I eventually ate something later that night the stomach reacted with an angry, terrible cramp that stayed with me until last night. To top things off I still had the flu (and I still do), so it wasn’t my best moment. Everybody else (and especially my bf) had a great time however and that’s all that matters!

It was quite funny at Auchan (Chinese shopping mall) earlier that day. One of the female guests helped me out buying all the beers… and man, did we buy some beers? How about five cases of Qingdao for starters? Top that off with 5 bottles of wine and 3 bottles of Gin and you get an idea. There we stood loading all the cases into our little trolley, a minor (wide-eyed) crowd gathered around us. I played with the thought of saying something like:

“Oh guys, it’s not only for the two of us! Two other girls are coming too!”

….but eventually I didn’t. We also had a big laughing moment when I asked one shop assistant for some help, all in Chinese, and he responded to me in English.

My female helper just stared at him, then stared at me, and started laughing.

-Well you know, I come here every single week, I’ve been doing that for the last 2 years. I don’t speak Chinese and every time I try to ask something in English nobody can help me, because nobody can speak English.

-Really, no one here speaks English? (I don’t often do grocery shopping over here, or if I do, I never ask for assitance).

-Nope, not a single one… until you come here. Fluent in Chinese. Asking something in Chinese… and then. THEN they reply in English.

Yup. That’s some serious irony.
Posted by Jonna Wibelius at 6:16 AM

I have an award for you over at my blog. Click on Award

hey,i really hope your bf had a good time. haha, see how busy you were for the other you love. touching!

I'm glad all went well with the party - Congratulations on pulling off the big surprise. You made me laugh by saying you outsmarted yourself with how you hid supplies in good places that you couldn't find later. I do that all the time where I say I'm going to put this or that in a "safe place" - If I could only find my safe place I'd be a rich man....LOL!

Oh wow! That's so cool! Happy birthday to the both of you!

Reminds me of shopping in Paris where no one speaks English till someone speaks good enough French.

anonymous -yeah, well I am glad he is not turning 30 every year.. hehe.

Sheila -that is so true! Unless u don't try in French, they don't speak any Eng to you.

Pete -I sure did. Kind of scary actually! Can tell I am getting older...