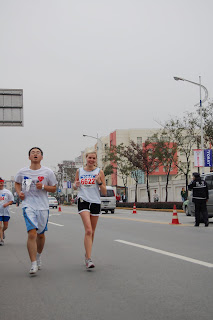 Compete with me and I beat ya'll

Once a week a visit a Korean family’s house to tutor their uber-smart 10-year old daughter. I’ve been doing this for 2 years now. When I started, the girl was really shy and she had no confidence when it came to speaking English, hence why her pronunciation was bad. After a few weeks with me (and no book, only games) I managed to break the ice and get her to talk. Now she’s in the most advanced class in her school and her parents love me. Why they still have me to tutor her is a mystery to me, however, we’ve kind of become good friends now so I don’t mind.

Yesterday she told me about what she’d been doing last weekend:

-I was working on a school assignment in my room pretty much all day. Well, until dad came in for our lesson.

-Lesson? Your dad gives you lessons? In what? Korean?

-Oh no. It’s a 2 hours business lesson. He teaches me about starting a company, about what to invest in and such.

I’m simply blinded by this girl. She’s 10 and she knows more about business than I did when I was 18. I wonder how much fun she has though? But that’s right. Over here, children’s lives are not about having fun.

Seen: Got no rackets? Throw it around!

You see the funniest things at my gym. Like two grown up Chinese men throwing a badminton ball at each other. No rackets involved. And no hitting of the ball. Throw-and-catch. Next to the free weights at the gym.

I love this. It’s me on the treadmill, running in a comfortable 10 km/hour pace with a 1,5 incline. It’s not fast, but it’s the pace I like to keep if I am aiming for running 10 km. It’s all peaceful and nice until some Chinese man sees me, and after studying my leg movement for a while decides to have a competition.
He spends a good time stretching. On the treadmill. Next to the treadmill. Behind the treadmill. Legs are bended and flexed and I see things I don’t want to see. But it’s all part of “scaring” me I guess.

Then it’s game time. Up on the treadmill he goes. (although not before he has turned on the TV and pumped up the volume so that even I, who’s running with headphones, can hear the Chinese opera singing show). He increases the speed. Never the incline. And BAM! The race is on!

He goes out strongly. Too strong. Does he seriously believe that he’s going to be able to run at a 12 km/hour speed just like that? Apparently so. However, after 1-2 minutes reality kicks in and he has to lower the speed to 10…. 9…. 8. Maybe he stays on 8 for a while, panting loudly and obviously having problems continuing. Annoyed. Reluctant to look at me. And then, another 5 minutes (and looking at my speed and legs with a frown) goes by before he gets bored and jumps off.

Although I have to say that I don’t mind this game because I always win!
(Best one of the week) Heard: The western man with the big biceps

One of our western male friends in Suzhou likes to go to the gym. He does weight maybe 3-4 times/week and also plays ice hockey once/week. I would say he’s quite fit, and since he’s also quite tall, he looks kind of big (especially over here).

Last week he went to a café down at Jinji Lake in Suzhou, enjoying a cup of coffee and reading the newspaper. Suddenly a Chinese man came up to him:

The Chinese man felt his biceps, ohhing and ahhing over the size and seeming genuinely impressed, before he left our friend alone.

However, 20 minutes later he came back with a bunch of Chinese friends:

Got to love this about China: What you THINK is going to be an ordinary Sunday with coffee and newspaper suddenly turns into a local arm-wrestle tournament!

Well, our friend beat everyone so in the end they came up with a new rule: letting the Chinese wrestlers use two hands meanwhile my friend could use only his left hand. He still won though.

-You are very strong, VERY strong! They all told him when he left a few hours later.
Experienced: “Expired” gym card follow-up

So, the big question this week was of course, were the reception girls at the gym going to tell me, once again, that my card had expired? The day after my little “outburst” I went again, and there was only one girl behind the reception.

She gave me a tired, half hearted greeting and I handed her my card. She scanned it without paying much attention until her eyes suddenly got fixated on the computer screen. Her mouth opened as if she was going to say something, and I smiled to myself. Then she looked at me, and I could see that she was hesitating for a moment, probably recognizing me.

-OK you can go in! She eventually said, and handed me my card.

There we go. One out of one. Let’s see how long this lasts though.

I arrived with five minutes to spare to my Wednesday afternoon lesson. When I walked into the classroom there was a Chinese boy sitting there, probably studying.

-Are you a teacher? He asked (in English) when he saw me.
-No, I’m a student, I replied in English.

-What are you studying?

-Ahhh, so you will have a lesson in this classroom?

-Oh, OK, then I will leave, he said and gathered his things.

Before he went out the door he suddenly said (in Chinese now, although our whole conversation had been in English):
-Your Chinese is very good!

-Ehhh….
-Bye bye!
-Bye!
Right. That's it. From now on I'll never take anyone complimenting my Chinese seriously.
Posted by Jonna Wibelius at 8:34 AM

Don't you just love the treadmill competition?! Or the sneaky walk past the back of your treadmill so they can see how fast the white girl is running?!

I can run 2 km without stopping. How about you Jonna. I heard you say you can run 10km.

Best post ever!
I would love to spend just one day in your gym...

Freakin' hilarious! Thanks for sharing.

Anna -hehe, yeah although at my gym people don't really bother to be "sneaky." they openly stare! :)

Jiang -yes I said so because I can. I normally don't make up things that I can do.

Little tiger -u r welcome anytime! I bet u and Rocky would hit it off! :)

A funny post, indeed, especially the part about the treadmill competition since I have recently started running. I mean, he is clearly a novice, 12 km/h without incline, it is definitely not good for his legs/knees! And why the stretching before any exercise? Perhaps, he was doing a 2-min interval just to impress you, haha. Right now I'm able to run at 5.5min/km for 10 km cross-country, and in my experience it takes a lot of regular training and motivation in order to improve the speed further...

By the way, it is possible to use the gym on a daily basis, like buying one-day-entrance ticket, in Suzhou? I'm heading to China soon, and would like to use the gym a few times during my stay.

Have you ever had Chinese people slip up and say your English is very good? This happens to me about 10% of the time someone tries to drop a "your chinese very good".

anonymous -yeah, I don't know what he was thinking. Starting at 12 km/h is quite... full on! I always need to start slow and then gradually increase the speed.

You can buy one-day tickets at the gym, although they aren't cheap. You can maybe ask them if they have a 2 week (or one week, depending on how long you are planning to stay) pass that you can purchase? All gyms are different. But it is OK to buy a one-day entrance ticket. No probs! (the first time they might even let you in for free if you say that you are "thinking about joining the gym but would like to try it first")

kdobson -hahahha, no, that has never happened to me! That's hilarious though! :)

I never thought of running 10 km each day. But I do run about 2 km each day to keep my weight down and body lean :)

10 km that is good endurance.

Competition! Seems everything has to be a competition. I often find myself "caught" in a competition. I frequent a Tibetan restaurant in the Shanghai Stadium and every time I go I always end up being forced into some competition. The last time I lost the tugging competition. Apparently the owner thought I was embarrassed or lost face and tried to make it up to me. I was just happy to sit down with my friends and enjoy the meal and show.

By the way, keep your arms down and knees up! ;) And it looks like the guy next to you will kill himself rather than let you win!

You always have interesting things to share on your Blog Jonna. Keep on spirit.

My SO has been in Korea for a long time. One day, he was in a local store, and a girl about 5 years old came up to him. She was speaking Korean, which he can't understand, but it clearly had something to do with his quantity of body hair as the girl started feeling it on his forearms. He didn't arm wrestle her, though.

george -haha, yeah, the Chinese society sure is a lot more competitive than what I am used to!

Darman -ah, thank you! That's great to hear! I love sharing though, so it's my pleasure!

pilgrimchick- hahahha! I don't know what is "worse"? Being arm-wrestled or having a stranger touch your body hair?!

The story of the 10-year old Korean girl learning business skills from her dad is not unique. I have a 10-year girl American-born Chinese girl and a younger boy, whom I have been trying to teach as much personal finance and investment knowledge as they can take in. While it's true that Asian parents tend to push their kids way too much on anything, I have found that there is a delicate balance to strike. Here in America, most American parents are way more permissive than Asian parents on mostly anything. I just made two overgeneralized statements regarding Asian and American parents, but they are generally true. The key is the balance. We try to make it fun and relevant to them at their ages. My kids have learned to understand the rationale behind stock investments, how to pick a less volatile stock and even know how to write an option contract with minimal risk. Of course, I preview them before submitting their trades. We have several fellow like-minded parents who are Americans and who are teaching their kids the same value and financial skills. Learning is good as long as kids enjoy it.