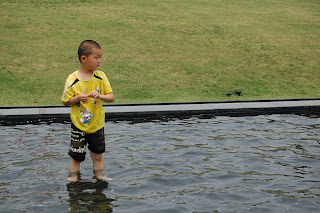 Back in Shanghai after some intensive days in Berlin and Malmö. Yesterday I did the lovely (not), 12 hour flight back. I had to transfer in Beijing, and when I stepped on the plane I was walking next to a typical Shanghai family: “mom and dad” (a young, trendy looking couple) and their mom and dad (grandpa and grandma) carrying their (at least) 3 year old "baby" boy. Although I’ve witnessed what I’m about to describe a countless number of times, it still manages to astonish me: The load and heaviness of that (not so little!) boy was totally on the grandparents, meanwhile the young, trendy parents went to sit at another section of the plane. The grandma and the child was seated in the middle section next to mine, and as soon as the plane took off the boy started whining.

It didn’t take long before the grandmother got up, and gave up her seat to him so that he could lie down and sleep across the seat section. But what was she supposed to do then? An old woman, standing on a full plane? Well, she simply sat down on the floor! Year, on that tiny little floor that also acts leg space between two seat rows on an economy class flight. She sat there, half leaning forward, hoping for the little boy to get his beauty sleep. They were like that for maybe 45 min, until the boy sat up, bawling like an animal. Grandma did all she could, but this time the boy wanted his trendy mom, who then had to get up from her comfortable position, and rush over to hold him for a short while, before handing him back to his grandmother.

Why do young people even get kids over here when they so obviously do not want to take care of them themselves? And why are children spoiled to an extent that makes me see red? Well, actually, don’t bother answering that, I know the answers already… deep rooted in history and tradition, yadi yadi. Still. Seeing a grandmother take the airplane floor so that a kid can sleep on a 2 hour flight between Beijing and Shanghai is quite a sickening sight. Just had to say it.
Posted by Jonna Wibelius at 7:24 AM

A disturbing sight. So many things wrong - example upbringing of the child, attitudes etc. Things will only change when people change their ways. Alas:((

That's totally opposite the American Chinese experience. Childcare is drudgery for the peasant class Southern Chinese hybrids who emigrated to America first so the use of Confucian hierarchy to keep order over junior family members is usually exercised.

I guess my question has to be, what will these children...or even the trendy parents, be like when they are Grand Parents? Will they show this same disregard for self comfort to make sure the young have all they could need?

i don't feel this is a traditional in China, but just some parents they even not know how to be their own role.

shame on such case which the younger chinese don't know how to respect others, even their parents.

Well actually this is traditional. Wether you find a goodlookin husband/wife which you either passionatly love or you think so..so... Aslong as you make kids! Thats chinese mentality and that is what upcoming grandparent will tell their kids. No wonder lately lot of chinese couples divorce.
~ Ye Ming 叶明

I agree that this is absolutely crazy! Could it be that the couple didn't really want to have kids but did anyway because of the tradition and grand parents' wishes? So they made this "deal". Well, I am not going to follow that if I get a half Chinese kid :)

This is exactly what I saw on my last flight from Vancouver to Taiwan. Except it was not 2 hours, it was 13 hours! I did not even realize it was the mom beside them until the end of the flight. Did not even lift a finger.

"until the boy sat up, bawling like an animal."