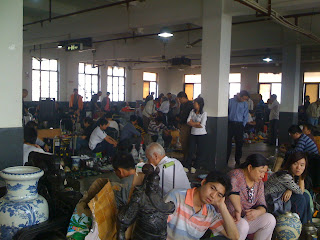 Top floor -only on Sundays!

Yesterday I left home around 8.30am so that I could be at Yu Yuan’s so called “ghost market” (or more like, antique market) before 9am. Despite congested streets I arrived on time, met my two author friends and went inside an old, white building, where the market was held.

It apparently works like this: the old, white house is the home to this market all week long. However, the top floor is only occupied on Sundays, where farmers/villagers from surrounding areas can come in, spread their blankets and try and sell their gods. Expect to find everything from old, broken plates to calligraphy paintings, odd porcelain bowls, jade Buddhas, and beautiful vases. There was really a bit of everything. Now, I actually haven’t been to the infamous “antique market” on a road in the Xintiandi surrounding area, so I have nothing to compare to. But judging from the amount of Chinese people that visited this market (compared to laowais, I would say there were 95% Chinese and 5% foreigners), I think this Yu Yuan ghost market was quite good. I saw a lot of Chinese people walking around with mini flashlights that they used to examine the bowls/vases/porcelain before making a purchase.

My friends shopped until they dropped. I was more conscious and only bought some kind of old, Chinese medallion, which I am hoping to be creative enough to be able to turn into a necklace. Still, the best bit must have been to walk around and talk to the old men and women selling the gods. They were over the moon when they realized that we could communicate, and more than once there was a little crowd around me when I tried to haggle down the price. Only one thing annoyed me and that was that almost all the old men were smoking and after 2 hours I had a headache and felt kind of sick from inhaling so much smoke. Except for that, I recommend a Sunday trip to this market, but go early, because it gets crowded. 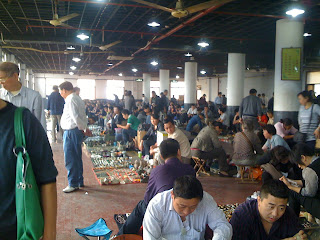 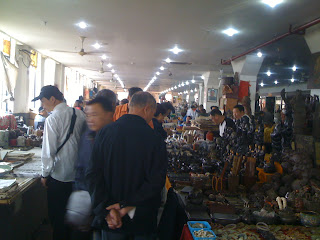 One of the other floors (not as good as the top floor)
Posted by Jonna Wibelius at 7:37 AM