The day I went to try on a designer dress 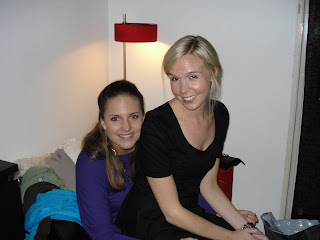 Stay in my own clothes = stay happy

Dear all, what I’m about to share with you is a tale of a girl/woman who never learns, and who sometimes also doesn’t knows what’s best for her. Are you ready? OK, well here goes.

For Sunday’s big, Swedish fashion show, I obviously wanted to look fabulous. Fashion-forward. Chic. And cool. So, when I shared this idea of mine with a super funky Chinese designer, and he said: “Well, you should come over to my studio and we’ll put you into one of my, fabulous outfits!” I almost jumped of joy.

Saturday morning came, and although it was a rainy, dull one, I was still determined to get on with the day. My plan was to first drop by the designer’s studio, try out a fashionable outfit, and then head straight to a class of hot yoga that I had signed up for.

As part of preparing for the hot yoga I didn’t put on any make-up that morning. I didn’t wash my greasy hair (although I did shave my legs, thank lord for that!). And I wore something that I think a fashionista would refer to as a “fashion crime,” namely washed-out, baggy comfy pants and a t-shirt, topped off with a fluro green (!!!) hooded jumper (the fact that I even own a fluro green hooded jumper is alarming!) and sneakers. I didn’t look my best, but still, when I checked myself in the mirror before heading over to the designer, I somehow managed to convince myself that I looked kind of sporty-chic. (Now afterwards, I will always refer to this as my "big moment of blindness.")

I arrived at the designer’s studio and was met by a rather big crowd, including: the Swedish designers behind Odeur, a couple of stylists, and some people working for the designer whose studio I was visiting. Everyone had that cool, “I didn’t have any time this morning so I just threw on this old sweater, and my hair is obviously just naturally perfectly messy”-look that I would never be able to pull off, no matter how hard I tried (I think you have to be born with it?) The fact that all the girls were in sky-high heels and had tiny waists goes without saying.

Everyone was there except for the designer himself:

-Oh, he got real drunk last night. Probably won’t make it here until after lunch. What are you here for again? A cool-looking, stone-faced design boy (all dressed in black) said, giving me a quick, not-so-impressed once-over. The feeling of being sporty-chic immediately vanished.

-Eh… the designer, Mr X, said I could try some dresses for tomorrow’s show?

I pretended I didn’t hear the sense of doubt in that sentence.

-That’s right. And the designer, Mr X, thought I could maybe wear one of his dresses?

Another suspicious, pity look before the designer boy disappeared, and left me with the rest of the cool design crew.

-So… guys, how are you today? I tried, trying to take the edge of the situation.

In that moment, I desperately wished I had worn something else but my washed-out pants and a fluro green jumper.

-Oh, well if you are referring to these clothes, I’m going to yoga after this! (I couldn’t help it, I just had to say something).

-Haha, for a moment I thought you were dressing like that on your spare time! Hahahahahha!

(We were laughing so hard that he must have been joking! Right? Right?!!)

The designer gang gathered around me, nodding and touching, all agreeing that it was a beautiful piece of clothing. For a short moment I felt as if I was going to be OK.

That was, until I tried to try the dress on. And couldn’t get it over my hips. At all.

There were no cheesy applauds or appreciative look when I stepped out of the dressing room, still in my baggy pants.

-Eh… the dress is too small, I said, and handed it back to Mr design boy.

I could see the pity in people’s eyes as they looked at me, then the dress, then my hips.

-Oh, we’ll help you find something! One of the Swedish guys said. Don’t worry! We’ll make you look beautiful as a princess!

And this is where it all went out of control.

Designers, fashionistas, angry-looking-dressed-in-black design boys… well everyone who was in the studio started pulling clothes for me. Clothes, that were either:

-Way too tight (I think I actually told one guy that tried to convince me to try a piece of stretchy-but-skin-tight body suit that “I would feel claustrophobic in something like that.” He looked at me as if I was from another planet).

-Waaaaay too fashion-forward (try a bright red, huge-blanket-like-kimono with a fat dragon print, that wraps around the body in several lawyers before it’s topped off with a tight waist belt, creating some kind of shape. Well, it might have looked cool on a model or on a fashionista, but it made me look like a strapped sausage).

-Way too short (I always considered myself to have “pretty good legs,” however, when in these, short, silky outfits, my legs looked nothing even close to good).

Eventually the designer gang found a loose dress that I knew would look like a bin bag on me, but that I still agreed on trying on, just to be a sport. Since that first, tiny dress that I hadn’t managed to pull down over my hips, I had been close to tears but I refused to let other people know that.

I got into the loose dress, that, despite its loose fit and baggy-ness, still managed to make me look ridiculous and kind of…. Fat!

-Now let’s see you, princess Jonna! The designers cried from outside the changing room. Come out and strut your stuff!

I took a deep breath, looked myself in the mirror and tried to convince myself that it actually wasn’t that bad, but when I saw what was looking back at me (not-model-thin-girl wearing what looked like a loose, but still tight at the wrong places, too short bin bag that made her legs look like chubby corn cobs) I almost lost it. I couldn’t bare having them see me wearing this, and then, with pity in their eyes lying to me and telling me that I looked good?!

Someone from above must have heard my silent prayer because at that moment, some customers arrived and everyone got super busy. I managed to get out of the bin bag and into my old clothes, and when I eventually snuck out from the studio with a discreet wave, everybody were so busy that they barely noticed me leave.

Lesson learned! Now I'll do myself a favor and never try that again.
Posted by Jonna Wibelius at 7:30 AM

I suppose that's the danger of being involved in the fashion industry at all; you are bound to develop some type of body dysmorphia or another.

You are beautiful. And NOT FAT.

I just wanted to say that I am thoroughly enjoying your blog! I started reading it as part of my preparations for my upcoming trip to China.

I just know how you feel.
I have recently moved to China from Denmark, and am not small, but also not big – consider myself normal - about a size 38-40 in pants – but here…. If I can get into a pair it is size XXL. And it is just not very self esteeming to buy clothes in size XXL, and mostly the shop assistants just shake their heads when I ask for a size I can fit into. Do to the fact that I had to leave most of my clothes behind in the airport because of overload; I need to buy some new clothes here, but shopping for pants is not at all fun ....

Maybe you can learn sewing? It can be a good way to wear what you want regardless of where you live. There is probably a lot of gorgeous fabric in China.

Those fashion people are not very realistic or understanding.

And it's very superficial of Chinese people in general to feel superior at the expense of people from other countries, who have an entirely different body make-up due to genetics.

But for the current trend for stick-thin appearance, they would be the ones who are unfavourably disposed.

OMG - first I could not stop laughing but then the laughter got stuck in my throat. The fashion world is a weird one.

You are soooooooo SLIM!

I'd really like to see photos of you in one of those fashion outfits. :)

Hey guys, thanks for your comments! LEt me just first and foremost say, that this post was not supposed to be taken dead seriously... It's not as if this experience is going to turn me into a person that never eats. It's more like... it's a bit frustrating sometimes to try on clothes here and always be the big one!

Nova -no worries. I'm not fashionable enough to be in the fashion industry! But thanks for your comment. And yes, I know I'm not fat. Well at least not outside of China.

Meghan -Glad to hear that!!! If you have big feet (like me), get your shoes before you come over here, because they have really small feet over here!

R og D -It used to be like that for me too in the beginning, then I found shops that had clothes and sizes that suited me better... so give it some time, and then u won't have to do the whole XXL pant thing... There are certain shops I would never step into over here... just for that reason! Head to Zara or H&M or Mango for pants!!

bloggingupiseasyd -Hm... not a bad idea although I am terrible when it comes to sewing.. I used to be thrown out of sewing class when I was a kid because i disliked it so much, and I wasn't scared of telling others.. Anyhoo, there are plenty of good tailors already in China, and there certainly are shops where I can shop, so it's not as if I'm suffering over here. It's just some design stuff I obviously cannot wear.

Thora -I'm glad u laughed at least.. that was the purpose of this post!

Jake -Well that's not possible since I obviously could not fit most of the outfits, haha!

Actually, Most western men are FAT. At least here in the USA. I live here and see it everyday.

Western lady from Europe have nice body, bumps and butt got everything. Chinese girls are thin because they eat so little. lol

My girlfriend are ALWAYS eating, food, brunch, snacks, yet she never go up in weight...I envy her....