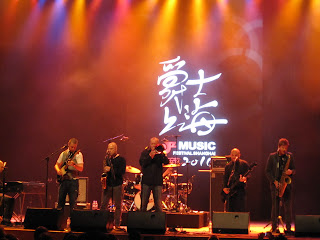 Nils Landgren and the Funk Unit at SH Jazz Festival

Oh my what a week I’ve had, even though I didn’t do even half of all the things I had planned to?

The week started in a healthy manner with yoga on Monday, a power walk at 5 am at Tuesday (I have to say I felt like something between a nerd and a loser when I walked by our neighbour bar in exercise gear and was greeted by drunk customers, still having beers. How do people do weekday drinking, I keep asking myself?). Wednesday was a big working day at the Expo, as the Swedish pavilion was honoured by a visit from no one less but Sweden’s very own (newly wedded) Crown Princess Victoria and her hubby Prince Daniel. I was there all day, and then spent the night watching a jazz concert by Nils Landgren and the Funk Unit, as part of Shanghai Jazz Festival. Real good stuff: Landgren managed to get the seated audience (mainly Chinese) to stand up, clap their hands, swing their hips, and eventually also to sing along! It was one of the better concerts I’ve been to here in Shanghai.

Thursday was a busy day at work, much due to having Royalties in town. At night I joined the blue-blooded crowd at the newly renovated hotel Waldorf Astoria (beautiful! Go there and have a look!) at the Bund where we enjoyed a 7-course dinner with the Royal highnesses. Pretty glam, I must say (and an excellent excuse for me to splurge on a new dress the day before).

Friday came and it wasn’t fun to get up at 6.30am… (again, how do people do weekday wining and dining and then go to work the next day?) but I didn’t have much of a choice as I’m still drowning in work. When I finished for the day all I wanted to do was to go home and curl up in the sofa with a DVD and a big chocolate bar, but I had promised to join some friends for dinner at Japanese joint Bankura, so there wasn’t much time for couch quality time.

It ended up being a fun night though. Dinner was great and was followed by some cocktails at a bar, and then we all felt so inspired and creative (….) that we ended up going back to a friend’s house, and played Balderdash until early morning (believe it or not, but it’s even more fun when four non-native speaker plays the English versions, because not only can you laugh at silly answers, but also at bad spelling and grammar… hehe).

Saturday was spent in a quite calm way: Slept late, had a big brekkie, and then went to a Swedish author’s reading in the afternoon. Early dinner, Chinese massage (aoooch!) and early bedtime, which could have been great… But, of course it wasn’t because guess what managed to ruin this calm, re-charge Saturday? Well, of course it was my inability to fall asleep last night (Gosh, I simply cannot afford to be tired these days?! How hyper active do I need to be in order to be able to sleep at night?). Today (Sunday) I still got up quite early and now I’m getting ready to go (in the company of one Swedish and one south American author who are in town doing a residence program) to something called “the Ghost Market.” I have no idea what it is, but I’ll tell you all once I do. The rest of the day will be spent doing a class of hot yoga, and then going to some dance performance arranged by a good friend. Now if this doesn’t manage to make me tired, God knows what does…
Posted by Jonna Wibelius at 8:03 AM

Thank you, Jonna, for such an interesting blog. You're the best!

Your work week was full and exciting. 5 AM power walks (btw a nerd and a loser would be the last thing I thought you’d feel), the Princess and Prince, Nils Landgren concert, parties, book reading. . .

Q: “How hyper active do I need to be in order to be able to sleep at night?”
A: Not hyper-active at all. You need to relax both mentally and physically.

I hope you are sleeping better now.

Chan -thanks.. well the thing is. When simply being tired doesn't work I tend to turn to other directions.. last week was quite awful. This week has been a lot better! Now I have done yoga before going to bed and that makes me really tired, so works well I would say!