The countdown has officially begun! 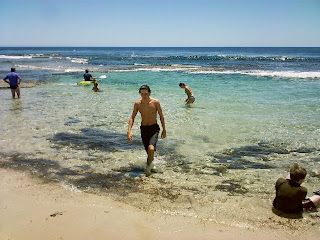 In exactly one month I’m going to be something between hyped and ecstatic. On Dec 28 we go for a holiday to Australia! I don’t know if I have ever looked forward to something as much as I look forward to this trip? It’s almost scary, and I’m aware of the fact that I’m running a great risk of being disappointed once we get there (“hope for the best but expect the worse” –right?). But then again –when I think about what I’m looking forward to, I don’t see how I could get disappointed. I’m in love with the atmosphere of life in Australia –and is it possible that that has somehow changed? I don’t think so. Since I left Australia in the end of March 2005 I have missed it every single day.

It’s not something in particular, even though I would lie if I said I don’t have some “must-dos” on my to-do-in-WA-list, like pizza and beers at Little Creatures, sunset cinema in King’s Park, swimming on Leighton beach (yeah I know it’s considered a surf beach, maybe that’s why I like it so much!?), having coffee on Freo’s cappuccino strip, taking the ferry over to Rottnest Island, visiting some wineries of Margaret River, walking along Swan River in south Perth, Sunday session at Left Bank, BBQs, seeing friends from the past… and so on (OK, I guess I have some kind of vision of what out holiday is going to be like).

In my dream life, I get offered a job and move back to Aussie land. In real life, however, I have chosen a profession in a category that doesn’t qualify for a sponsored visa. Oh well. A holiday will have to do for now! The countdown has officially begun!
Posted by Jonna Wibelius at 10:25 AM

aww the ocean looks amazing. I visited a Chinese tea house here in the US today. Their menu was impressing with the most famous teas from all of the different tea-producing provinces. It definitely made me want to visit China!

Australia is awesome. They have an amazing quality of life -- probably the best in the whole Asia-Pacific region.
My husband and I visited to Cairns and Northern Queensland last year. Except for Canada, I've never seen such blue skies or such friendly people.
Our next long vacation -- whenever that may be, maybe mid-next year -- will be to Ayers Rock.

ha ha im going the other way...i am now in australia.... adelaide actually and going to china on the 26th hohhot. the contrast in weather couldnt be greater ....its beautiful weather here and i believe its very cold in inner mongolia.....