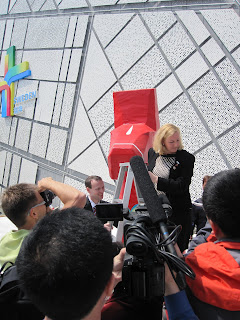 Sweden's Minister of Trade at the inauguration of the Swedish pavilion, 6 months ago, painting the eyes of a today kind of worn-out Dala horse.

Yesterday I went to a closing ceremony at the Swedish Pavilion. It was fun to get closure to an event that’s been ongoing for the last 6 months (and in the planning stage long before that!). What now remains is to find out the future of the Swedish pavilion –will it remain in China or will it be sold elsewhere? The bidding is apparently ongoing, so we’re yet to find out.

Some Swedish Expo facts in numbers (from the official Sweden expo homepage):

* More than 3.5 million have visited the Swedish Pavilion
* Over 110 partners have co-financed the project with government

* 150 million is the total project budget

* 2300 official delegations have been received

While the Expo has been a fun experience to be part of, it has also resulted in a lot of stress and way too many sleepless nights, so on a personal note I’m quite relieved that it’s over. Now it’s time to put all that energy towards something else.

One of the things I’ll make sure to do now when I have some more time on my hands is to start studying Chinese again. Sure, I use my Chinese on a daily basis at work, but there’s always room for improvement, and I’ve wanted to go back to the classroom for some time now. Not full-time, oh no no, I still have a job to do (!), but I’m thinking once/week to start off with, and then maybe twice/week eventually. Let’s see.

Another thing I will spend some more time on now post-Expo is my yoga practice. Yesterday I renewed my membership, spending an awful lot of money on something that is worth every penny: since I started yoga I’ve gotten rid of my sore back! I’ve also become a liiiiiiittle bit more flexible, and for someone like me (flexible as a fridge, without exaggeration), that’s a big step in the right direction. It’s also nice to get some ease from the treadmill every now and then, and even though I really bad at yoga and the teachers probably think: “Oh dear Namaste master, help that stiff girl because I know I cannot!” it makes a difference to me, and that’s what matters. I’m also proud of myself for the fact that I am doing something that I know I will probably never be really good at –and still enjoy it.
Posted by Jonna Wibelius at 7:17 AM

That the big expo, and had closed now. I just seen on tv when they closed with big party.

Maybe, so many transaction there ...