Little Lang Langs in the making? 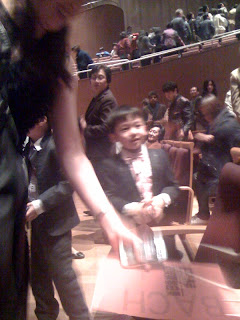 Lately I’ve been going to a lot of classical music concerts at the Oriental Art Centre Concert Hall in Pudong. Not only is this great because I love classical music, but simply because in Shanghai, there’s actually a great selection of stuff to see (Which again, forces me to point out that living in Shanghai is so different to living in Suzhou where I, during my 2 years there, didn’t go to a single concert/performance/play. Sometimes I have to squeeze my arm just to remind myself that no it’s not a dream: I’m back to living in Shanghai and it’s beyond amazing).

Last night we saw (or heard) a piano duet by Vladimir and Vovka Ashkenazy. Loved it –love piano music. And by the look of the audience, I wasn’t the only one. The venue was packed, and I would say that 95% were Chinese… and maybe 30% had brought their children! Yes, imagine my surprise when I realized how many kiddies there were. Like really, small kids! We had good seats, in the very front, and next to me was a little Chinese boy, so small that he almost fell off his seat! Him and his brother were dressed up in shiny mini tuxedos, looking adorable and jumping up clapping and bowing every time the Ashkenazys finished a piece. When the concert finished the kid’s mom pushed a booklet into their hands (“Bach best pieces”) and urged them to run forward to get it signed. On the verge of inacceptable, however, Vovka Ashkenazy had already noticed the tuxedo boys and greeted them with a smile, despite guards stepping in to usher them away.

Once we got up to get out I realized how many kiddies there actually were: all dressed up to their toes, obediently holding their parents hands and smiling peacefully. I also noticed that a lot of them were holding on to little booklets with notes, obviously hoping to put an inspirational signature on them. And very well, once we got out from the concert hall there was a huge line of people waiting to meet the duet and get an autograph/handshake.

Are those children China’s new little Lang Langs in the making? One couldn’t help but wonder.
Posted by Jonna Wibelius at 7:36 AM

Just play on, little ones, boys and girls! With less parental pressure , continue to enjoy music.

i was looking for my friend blog about how to get your ex boyfriend back and i bumpt your blog and it look cool.. :) i will visit here again.

Great post, Jonna. It gives us a real and insightful glimpse at life of local people in Shanghai.

Yeah they were cute those little children! Can tell u this much: I played the flute as a kid and I was neither cute nor ambitious.


Best of luck to those young musicians : )