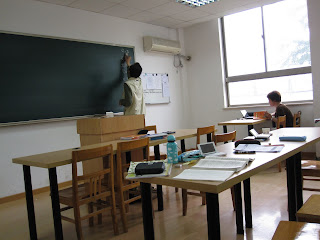 Yesterday I went to study Chinese straight after work. Although it was hard to get there (basically not that easy to motivate myself to hit the classroom after 8 hours of work) once I did, it was actually a lot of fun! I had forgotten how fun it can be to study, and especially to study Chinese (to read textbooks with characters –and by the way, how easy are those text books now when you are faced with not-so-study-friendly-texts in your everyday life?!). What I find funny, though, are Chinese teachers. They never fail to astonish me with their comments and their unwillingness to believe that a foreigner can actually read, write and speak Chinese!

-My name is Cindy, said my teacher when she walked in.

-What’s your Chinese name, I replied in Chinese.

-Oh, it’s a bit hard, she said and wrote it on the board. I read it our loud.

-Oh, you can read some characters?! She said.

-Yes, I have studied before, I replied.

After 10 min of conversation (all in Chinese of course, however, I noticed that Cindy would throw in Eng words every now and then) I stopped her:
-Do not, no matter what, speak English to me. Regardless if I don’t understand you. Don’t use Eng to explain the words. Use Chinese!

He face lit up.

-Of course! That's an excellent attitude!

-So you are totally OK with pinyin?

-Pinyin? I don't use pinyin, I have studied Chinese characters.

She went and got a book: “Writing characters for beginners.”

-I often use this book with foreigners that can speak Chinese well but who cannot write at all.

-But I can write! I write every day at work! I have studied Chinese characters. I have even taken writing classes and written essays in Chinese!

-Yes, really. Just like I told you, I studied for 2 years at a Chinese university, mainly with Japanese and Korean students. Trust me. I know characters.

-Well… if you say you know characters I have to test you. Turn to page 60 in this book that is our hardest book and that I have chosen for you (“Business Chinese for Managers”).

Now, reading a text can be hard when looking at it for the first time. Also, it’s been a while since I read out loud.

But once I started it went by itself. I read the whole thing, stumbled on 2 characters that I didn’t remember, and that was it.

Cindy just stared at me.

-Well this text wasn't that hard...

(Yes but what? Foreigners normally lie about their Chinese level? Why would someone do that?)

-…well, anyway… there were, ehum, 2 characters that you didn’t really know, let’s study those…

And then we spent the next 20 min studying 2 Chinese characters.

Anyway, point that I’m trying to make: unless they see it for themselves, simply telling Chinese people that you can read Chinese characters doesn’t cut it. Show, don’t tell, is the golden rule over here.

Posted by Jonna Wibelius at 7:29 AM

lol, in that case, why did you even go to class at all if you already knew everything?

Being a foreigner of Chinese ancestry when I was learning Chinese I often got the exact opposite experience. "My you talk like an idiot. Get out of my face!" When I explained to someone I was from Canada they laughed at me and said I was making up a story and not a very good one at that.

And as Don says, it's not the same thing but some Chinese also have a mental block about people like me when I say I'm from England they reply "but how can you be from England, you look Chinese?" Argggh!

haha, I wish I had that problem in my Korean classes!!! I'm always behind the other students because they all have time to study and don't also work full time!!!

Breaking boundaries and stereo-types, good for you Jonna!

I'm an American, and when I was studying in Hangzhou last summer, my classmate and I went to get some ice cream. We ordered the ice cream in Chinese. The old lady says, "Your girlfriend speaks very good Chinese. How long have you been teaching her?" My classmate has brown, curly hair and green eyes. She speaks Chinese and Spanish better than I do. My friend replied, "We're both American." The lady ignores her and says, "Wow, she can even understand our conversation?" It went on and on like this for a few minutes, the woman completely ignoring my friend and only talking to me. The woman assumed that I'm at least half Chinese b/c I have black hair and brown eyes. Her parting words to us were, "But you look Chinese from behind...You should marry your classmate, even if she does have a boyfriend. She's pretty and very smart." Needless to say, we couldn't help but laugh.

Oh, and to echo Don Tai and WoAi's comment, my classmate's boyfriend was Taiwanese American and the mainlanders were always criticizing his Chinese, regardless of how fluently he spoke and read everything they could throw at him. They just wouldn't give him a break. They actually treated him worse than the rest of us b/c they thought he was trying to fit in w/a bunch of foreigners.

I am glad to see that you are writing again. You have quite a talent for capturing conversations and making them feel authentic. I suspect the poor teacher had a lesson plan for you and you were systematically destroying it and all her backup plans.
I don't know the statistics, but maybe 1 in 5 foreigners that Chinese meet speak some Chinese and, of that, 1 in 20 speak as fluently as you do. So, it's not a bad assumption for the Chinese to make when first meeting someone who looks like you. But, she really persisted in her original assumptions.

I also have studied hieroglyphs, but then it went all too difficult I just could not help, but to give up.

Nothing new. I get this a lot of the time too. I hang out with Chinese friends and they always end up getting asked all the questions, which usually end up with them telling the person to ask me.

I've also found that this show don't tell applies to a great deal, if not everything in China. Design, logic, manufacturing techniques and or anything else. Everyone thinks they are an expert at their job (some are).

Foreigner comes and and tells them how to do something. Never works out the first time. Usually hours or days later and finally they figure out that oh, gee maybe you do know what you are talking about and that degree and experience you said you had was actually true.

Of course when they do see that you know what's going on they want to pass all the blame and responsibility to you. Thus eliminating the possibility that they are wrong and look retarded.

Don Tai & Woai -that must be sooooo annoying... I have to say my problem seems tiny compared to having to deal with that all the time.

조안나 -well cheers to u, working AND studying! Not easy!

Phoenixkidd _I do my best, hihi!

Anonymous -funny story about ur friend and u, I had the same when I was travelling with my indonesian friend some year ago.. I blogged about it then. Everyone thought she was my guide and it was funny most of the time but annoying when they tried to convince her to rip me off.

Telemachus -thanks for that nice comment!! :) I am far from a Chinese language master, but at least now I feel comfortable with where I am and that's so nice after all that hard work. Well then, u should always strive to be better so that's what I'm doing now... Ive got my second lesson tomorrow night!

Mountaincat -this is my private teacher... It's only me and her... :) Let's see how it goes tomo!

Homer -well true, it happens a lot over here... oh well, it would be nice if they would trust u at once every now and then..

I'm a foreigner and I lie about my level of Chinese :P But I'm humble, not boasting. I always have fears that I will say something wrong and everybody will laugh. So I rather say my Chinese is bad :P

MKL -I'm also very humble about it... the only exception being when I'm paying for my private Chinese lessons!

MKL: Behind humble is a good idea (especially in China). But at the same time we shouldn't be afraid to make a fool out of ourselves. After all, that's usually how we remember how to do things right the next time. I always leave my pride outside the classroom when studying Chinese. Better that way!