The nice artist and his mean wife 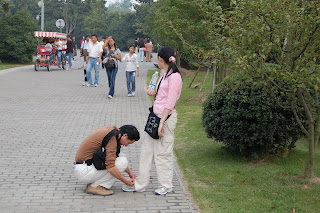 Be nice to the people that are nice to you...

Yesterday I went to visit a Chinese artist. A quite highly ranked artist, who still was so nice and down-to-earth that I just wanted to hug him from the moment we met. His whole face was smiling and I knew it was going to be a good day. That was, until I met his wife.

Now, since I got here I’ve heard a lot of tales of the “strong Shanghai woman” and the wimpy man who carries her bag, buys the groceries and does the housework. Now tales are tales, and since I’ve never seen it in reality I haven’t taken it too seriously. Until yesterday. Because here they were, a living example of an unhealthy twosome: a strong (although I’d rather refer to her as mean) wife and a nice but weak husband. The wife was so sour that there simply was no end to her bitchiness: she complained about everything! About how other people drove on the street, about the parking lot we got at the restaurant, about the waitress asking us if there would be more people joining our table (“Of course there will not, are you blind? Don’t you see that we are five people!?”), about the way other people looked, acted or spoke. Once the waitress put a large plate of fruit on our table she was furious, screaming that it was too soon for fruits, as we hadn’t finished out meal yet. I was doing fine in terms of avoiding her comments, until she suddenly fixated her eyes on me and started telling everyone what a “large nose the laowai girl has got!”

Until then, I had been sitting there listening on her offending everyone from the cat walking outside (“filthy animal! I hate animals! But they all love me, hahahaha!”) to her very own husband sitting next to her (“oh he’s OK although I wish he was taller and more handsome! If it wasn’t for me he wouldn’t have any friends at all in this town, he doesn't have any social competence”) but then suddenly I thought: “No. I’ve done my deal of listening and I’ve been here for 4 years now. I’m not going to sit here and listen to yet another useless and shallow discussion about my nose –especially not when it’s being triggered by this horrible woman!”

-You know what?! I said. I don’t like when people comment on my nose, my weight, my height or my look. It’s considered rude where I am from. When I first came to China I had a hard time dealing with it. Now I have come to a point where I understand it, but I still don’t like it. So can you please stop talking about my nose?!

Silence. You could have cut the uncomfortable tension with a knife.

Until the husband saved the situation:

-Yes! Of course! It’s culture difference… it takes time getting used to…

Sure, culture this, whatever. It’s one thing to be curious and another thing to be rude. I’m happy I actually said something to this woman (I’m also happy that I don’t have to meet women like her every day) Also, I think there’s a fine line between talking about differences and simply being rude.

Gosh. What a woman!
Posted by Jonna Wibelius at 7:27 AM

Its probably her only way of dealing with low self confidence, I almost feel sorry for these people...

Its probably her only way of dealing with low self confidence. I almost feel sorry for these people...

I know exactly what you mean Jonna, you gotta watch out for those wives. In my former life when I was a child begging or selling something the husband would be nice and reaching for his wallet, then the wife would come and scowl and sometimes run us out.

First of all, I've seen your nose and it's lovely! What a coincidence we both more or less blogged about the same topic on the same day. I just wrote about how a Shanghainese friend of mine is only permitted one night out with his friends and colleagues by his bossy, Shanghainese wife. These people are insane and it's baffling how such gentle, nice guys choose to be with them!

The way you said it was factual and not rude or aggressive, and she got the message very clearly : )

Well, Jonna, you do have a big nose. hee hee...I am sorry, I could not resist. You don't have a big nose, and I don't care where you are from, it is not polite to talk down to or about someone.

So she bitch about everything huh? I can't stand that myself. This girl seriously need a chill pills.

A lesson learned from you! Hopefully that silence gave her the chance to allow your rebuttal to sink in.

she is not that different from the typical chinese i deal with if i come in contact at all.

good for you for speaking out. sometimes you just have to say it when this lady goes over on a tangent... you've totally challenged her beliefs about treating people in general.

I think it's awesome your Chinese is good enough you can tell her to stick her head where the sun don't shine.


And yes, I know what you mean about those wives. A woman I have known a long time is exactly like that.

(makes me think of that saying...women- can shoot 'em, can't live without 'em)

Cheerio and great to see you back!

Why do you always emphrise on your weight in lots of posts? From your picture I would like to say you are really slim. Get back to the mean Chinese lady, men like seeing cats fight.

I think you handled the situation pretty diplomatically, considering your feelings at the time. People like that usually get by on the shock and fear they make other people feel, and it's good for them to be talked back to a little once in a while so they know they can't push the entire world around.

Great response! It was direct, matter of fact,and to the point. Hopefully, the next time she decides to belittle someone she will reflect on what you said and how you said.

Wow, so many comments?! I had no idea that there were that many people reading this blog! Awesome!

Glad that most of you don't call me an idiot for cutting this mean woman off. I am normally a quite calm and nice person, but when someone or something triggers me to a certain point, I find it had to hold back. And I always think that it's better to have said something and then complain, but to just complain. right....?!

(and yeeees, it's soooo nice to have that level of Chinese now that I can tell people in their native language what I feel... then they cannot just laugh it away. Love it. All those painful semesters at the uni were worth it!).

As someone commented about my weight obsession -sorry that I bring my weight into so many posts. My friends from back home have also told me that I talk too much about it and that I seem obsessed. Thing is, as a girl/woman (ur pick?!) who spends a lot of her free time at the gym/in gym clothes I have obviously always been interested in fitness/health. Up until I moved to China I didn't have any bigger issues, I even used to be one of the "more fit ones" no matter where I went, because not that many girls run 15 km and like it... but I did.

Then I came here, and was met by comments like "You're too big!" "you're so fat!" "your bum is so large!" and "that laowais hips are huge!" and suddenly I felt like a whale! I know it's silly to compare myself to Chinese girls -I will never be as tiny as them. Anyway, it's an ongoing battle in my head to try and get used to being "the biggest girl in the room" (because I never was back home) and hearing comments about my bum/hips... sorry if I keep bringing it up in this blog. I know it must be dead boring to listen to... I'll try to keep the lid on for a while (or at least until I head another horrible comment that I will need to ventilate, haha!).

there's nothing wrong in speaking out as you should anyway, and when you do,instead it is frowned upon on as it is more appropriate to be humble and quiet about it according to some.

this behaviour should NOT be tolerated at all.. it is a shame that some people put up with it! and give power to the meaning of being a bully and rising them up to a higher stance whether it's in a social gathering or at a workplace....

i dont blame you for talking about weight in alot of your posts, cos they fookin make you feel insecure in the first place and kept mentioning it over and over again. if they ever do it again - slap them on the head or something :)

What a horrible woman ! I cheered when I read what you said.

I now find myself very lucky to have picked one of the " GOOD " ones out of Shanghai for my Wife .
Great going Jonna , to speak up .. she needed that and maybe a nice slap in the Face too . I wish her Husband had some Balls and kick this Woman back on the Single Market . haha

Jonnas. If it helps I am a Chinese guy living in America who I think that Chinese girls who don't have hips or ass unattractive(the have figures of teenage boys).

Haha. Good one. I wish they would realize it's rude! I've had a Chinese friend squeeze my arm, giggle and tell me I had fat arms, another telling me my tights made my legs look fat and some else saying my outfit looked bad! Once I finished eating with a Chinese guy friend and he told me I had gotten fat. Way to ruin the meal. I wear an XS jeez!