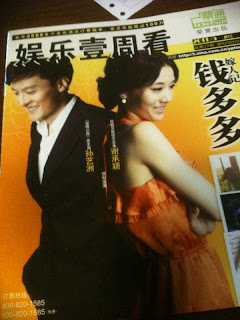 Excuse my lack of blogging, but this time it actually wasn’t by choice: blogspot was down most of Friday, so it was hard to blog. Maybe it was for the better, though, because last week was crazy busy. I think I’ve spent a maximum of 7 hours/home per day, and that includes sleeping.

On Thursday night a Chinese friend of mine took me to the theatre to watch a Chinese play. She’s married to a laowai, and his Mandarin is very good. For some strange reason, she believes that my Chinese is almost as good. So one day she said:

-Hey, you should join me to the theatre and watch a Chinese drama! I often take my husband and he enjoys it. When your level of Chinese is so good it’s a shame if you miss out on the local goodies.

I could not have agreed more (about it being a shame if I’m missing out, not so much about my language skills) and decided to give it a go and join her.

We went to 上海话剧艺术中心 (Shanghai Drama Art Centre) to watch a play called 钱多多 (it basically means “a great deal of money” but the name was also similar to the name of the girl in the play). It was about a Chinese woman, who was about to turn 30 and who still wasn’t married. Everyone around her (especially her mom) kept telling her that she had to find a guy and get hitched, before it was too late.

It was such a great play! First of all, I didn’t know that the quality of local acting was so good over here (really, it was fantastic), and second of all, I had no idea that the Chinese could have so much self-irony to make something so serious (marriage in China) so much fun (this was a humorous play, that made fun of everything from a nagging mother to some eager, but-oh-so-annoying-bachelors). My friend and I were laughing out loud (she even more so than me, as I didn’t get every single joke -there was a lot of referral to internet slang, TV shows and such).

The play went through all those difficulties an un-married woman in her 30ies might face here in China: too successful at her job to find a man willing to marry her, a mother who tries to set her up with the wrong guys, a super annoying bachelor who won't listen to anything else but his own voice, a (seemingly) happily-ever-after married best friend who’s a luxurious stay-at-home-housewife until she finds out that her husband has been having an affair, a cute guy that loves her –but that is 3 years her junior, and therefore cannot be considered Mr right because oh no, how could she marry someone that is younger than her? All in all -a great mix that caused both laughter and tears. The audience was loving it -roaring with laughter and applauds. Actually, I've never seen such engagement from an audience in China?! And I've been to both the Olympics and some pretty good concerts.
The play is on until May 22 and if you live in Shanghai and understand Chinese, I strongly recommend you to go and see it. I am real happy that my friend introduced me to the world of Chinese dramas and plays. I know this wasn’t the last act I watched here in China.
Posted by Jonna Wibelius at 7:28 AM

That's just wonderful! A whole new world has opened up to you!

I clearly remember the first time I went to see a Chinese play. This was years ago -- 1996, I think. That older woman/younger guy issue appeared in that play as well, with the guy explaining to the woman that, since women live an average of five years longer than men, her being five years older than him made them a perfect match!

Thanks for the report. I hope you find yourself back at the theater soon!

Blogspot was down? How do you get blogspot to work in China?