Why Asians don't perspire as much as westerners 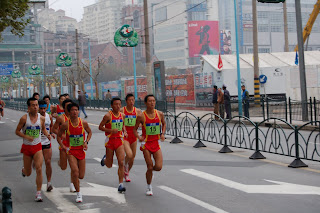 Team China is not sweating it.

Last Sat night I went out with a Chinese friend. We ended up going for a long dinner, and then to a wine bar for some drinks. We talked and talked, and suddenly I realized that it was only us left at the bar and that the waiter came up to our table.

-We’re closing. Do you mind? He said, apologetic, and pushed us the bill

That’s when I glanced at my watch and realized that we’d been out for 8 hours (!), talking non-stop. It was definitely time to leave! I think it’s best Chinese language practice I’ve gotten in a long time, however, and my dreams were in Chinese that night when I eventually fell asleep.

Anyway, during this marathon conversation we talked about a lot of interesting things, including fitness and working out. My friend confessed that he only eats salad at nights (!!) as he’s afraid of gaining weight. Now I never, ever, thought I’d hear about a guy doing that in China –but there we go.

Another thing he explained to me is why Chinese people don’t perspire as much as westerners when working out. This is something I’ve spent a lot of time thinking about, since I often do yoga/spinning/classes together with Chinese people, and since the pool of sweat (TMI –sorry!!!) is always (by far) the biggest around my yoga mat/bike/spot.

-It’s because Chinese people, or Asians in general, have relatively underdeveloped sweat glands. They have noticeably fewer apocrine glands than black or white people (FYI: these glands contribute to the smell of sweat when mixed with bacteria). This is why a lot of Chinese people don’t use deodorant, cologne or perfume.

My friend also told me that for Chinese people, sweating is considered a sign of being unhealthy.

-A lot of people obviously know that it isn’t so, like the ones that go to the gym a lot etc, but the overall image of sweating in China is that it’s a sign of bad health.

This last statement I’ve heard before, but I never actually thought there was any kind of reason for it. To tell you the truth, I thought it had something to do with people being too lazy to do sports. Now, however, my I realize that I’ve been quite narrow-minded in my thoughts, so I’m happy I got this one straightened out. For me, that have done sports since I was a kid, sweating (a lot!) is such a normal thing, and I’ve never really been too ashamed of it. Rather, I’ve seen it a sign of good health, an active metabolism system that burns a lot, and a great excuse for eating a lot of food (hehe). But there we go –in China I’m not considered that healthy after all. Oh well. At least now I know why.
Posted by Jonna Wibelius at 7:25 AM

One strange thing I've noticed here though is that they sweat (particularly men) more when eating really spicy food. I mean sweating a lot. I don't sweat at all when I eat spicy food, usually it just clears out my sinuses a lot... which doesn't seem to happen to them. I haven't figured out if that's an asian thing or a man thing or just the people that I know thing, but anyway, there it is...

ehh...i know for a fact that unusual sweating when you sleep is considered a sign of kidney problem by chinese medicine. but i have never heard someone claim that sweating in general is bad even if it's just a baseless rumor. perhaps you have mixed them up. ^^
your friend is right about Asians having underdeveloped sweat glands.very well explained

I used to be a non-sweating asian too, until I went to Turkey and somehow my sweat glands just opened up. So it is fully possible to re-develop your sweat glands?
You are right that sweating is considered a non-asian thing by asians, but the whole view is completely different here int he West, and honestly, I don't know what to believe anymore. BUT I do not this: I prefer to not sweat. Too bad it is too late for it now!

I think the real question is why do east asians have underdevelopped sweat glands? Think about it, which summers are hotter, Shanghai summers or Sweden summers? Since sweating is used by the body to cool off and avoid overheating (amongst other things) it seams unlogical.

I've been told that East asians have been living in proper housing for several thousands of years longer than "wild European savages" and were protected from the elements so that they "devolved" their sweat glands.

But it does sound a little like some racist superiority theory...

So has anybody else heard about this?

Wannes -well trust me, I was as surprised as u when I heard of this. I've just noticed that Chi people sweat less than western. I'm not the one who said they have less developed sweat glands, it was told to me by a Chi person. What is so racist about that? People are different. I know what I would prefer if I could choose. Not sweating heaps would be awesome! I think that's what Aili said too.

Don't get me wrong, I am fully aware that east asians sweat almost never (except when they are sick :-)

I was simply saying that I'm not sure if this theory that they had better housing was valid. Have you heard anything like it?

I think your friend needs to meet my dad; he might be Chinese but he sweats more than our entire family put together. I'd say he has "dry patches" rather than sweat patches, When we went to China, he usually looked like he'd just had a shower in his clothes... it was hilarious (and a bit gross).

i agree with what your Chinese friend said.That's why not so many Chinese people put on perfume,especially guys.BTW,I am from China and experience the same confusion when I am here(America).

Jonna, this is one of those ha-ha-ha posts. Very insightful but a tad controversial. I personally believe what your Chinese friend says. I as a Chinese definitely don't sweat as much as my Western friends when we play sports. Did it ever occur to you that Sauna and steam room are way more common in Asia then the West? That's because Asians don't easily sweat and hence need hot bath to help them do so. And sweating is a good thing as it helps cleanse your body.