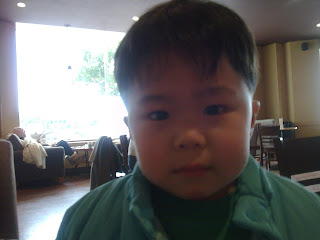 There’s nothing better to do on slow Monday afternoons, than to take your obligations to a cosy café and cheer yourself up with lattes meanwhile trying to deal with studies/work. So, on a rainy Monday in Suzhou, I decided to take my studying of Chinese characters to a nearby Starbucks café in order to get out of the flat for a bit.

At Starbucks, between 2.26-5.10pm, the following things happened:

1. I was told I am not fat.
“You are definitely not fat!” the Starbucks worker at the coffee machine suddenly said while I was standing there, waiting for her to make my coffee.
“Excuse me?!” I looked at her in confusion.
“Well you always order low-fat lattes. You don’t have to do that. You are not fat!”
“Well, ehum... thanks? I suppose... ” I replied. “But I order low-fat because I actually don’t like the taste of cream, not because I don't want to get fat.”
“Oh!”
(Busted!!! She's been checking me out!!! Or OK, at least my orders.)

2. I made friends.
Once seated, three small Korean kids, aged 5-7, gathered around me and started asking me who I was and telling me their names. Since our Chinese skills were on the same level I actually had a blast chatting with them (me; -sipping a latte and them; -sucking on lolipops) They were, just like me, living here, and learning Chinese by attending kindergarten. I told them I was doing pretty much the same thing as them, but at the university (They didn’t understand the word ‘daxue’, meaning ‘university’ -I couldn't help feel a silent sting of joy. My Chinese skills are better than 7-year-olds... YEY!). Oh the bonds that are made at Starbucks!

3. I was offered a job.
After chatting to those little kiddies for a while, their mothers (typical ‘tai-tai’s… meaning, ‘house wives’) came to join us.
“Would you like to teach our daughter English?! We pay you 150 kuai/hour plus the taxi fare. We pay more if you want to.”
“If I want to?! How much do you pay?!”
I said I’ll think about it. (I love how I sometimes get taken for being native English here)

4. A guy asked for my phone number.
When leaving Starbucks, a western guy ran after me just when I was about to step out.
“Wait! Are you new in town?”
“Jesus, how small is this place?!”
“Quite small! My name is…..”

And so, I’ve got a coffee-date coming up. But no no no... don’t worry people. I am not talking date-date. I am talking a strictly having-a-cup-of-coffe-date (maybe the word date should be replaced with something else... 'meeting'? well, u get the point!). Obviously, I’ve got no interest in dating other dudes when I am already seeing the "much wanted hot, blonde Finnish guy” (at least according to the Chinese girls. Read the previous post if you feel confused) :) But it’s always fun to meet new people!

….And that’s my average Monday in China, everyone! :) 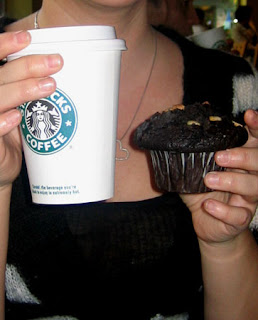 谢谢星巴克! Thanks Starbucks!!
Posted by Jonna Wibelius at 10:29 AM