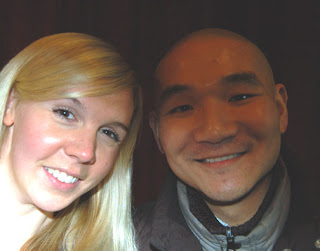 The flash didn't flatter me at this shot, but who cares, it's me and the Master!?!

The people that know me know that I love fashion. The people that don’t know me….Well, now you know! So you can probably imagine my excitement when I some weeks ago managed to set up an interview with no one else but Lu Kun, China’s most famous fashion designer, and also known as ‘China’s Galliano’. Seeing that I am actually writing an article about Lu Kun, I’m not going to repeat the interview here, however, I am going to flash this highly unpro (but still fun to have) photo of me and Lu Kun!

Not only is this guy a genius when it comes to designing clothes, but he is also very smart and professional as a person. Obviously, I couldn’t resist asking him what he thinks of Paris Hilton (who wore Lu Kun’s dresses at the recent MTV Asia Style Gala in Shanghai that took place in November last year). Can you guess his answer?

-Paris is actually not like everyone thinks… she’s really nice, smart and professional.

Sounds so… familiar?! I wonder if I read that somewhere?

Another interesting thing Lu Kun pointed out is that he couldn’t imagine Scandinavians wearing his clothes.

-My clothes are for divas, for people that want to stand out. You Scandinavians wouldn’t be able to handle it. My designs are too attention-grabbing.

Then he showed me one of his red gala dresses from his SS 2008 collection and I couldn’t more than agree. It's simply, too fab! 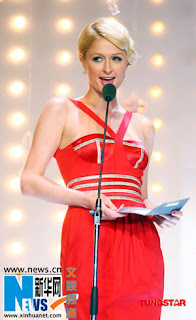 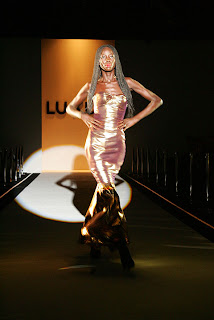