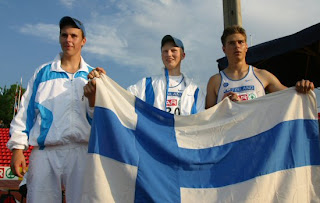 This might sound a bit odd, but I swear it’s true: pretty much every single Chinese girl we've met has got a crush on my boyfriend.

He’s tall, blonde, Finnish, and takes good care of himself. And the Chinese girls like what they see.

I quickly got used to the longing stares at the metro or in public places. I also soon got used to having to ‘pee on him’ (a intimate term that we use when one of us should ‘mark his/her territory -eg, deliver a kiss’ and show the onlookers that the object they are drooling over is in fact taken), as well as having problems getting served in restaurant as many girls were too shy/nervous to come up to our table. “For Christ’s sake, he’s already got a girlfriend!” I often wanted to yell. “And she is sitting next to him! Stop ignoring my absence, despos!!” But sometimes (or quite often, actually) it seemed like I was invisible to those girls. So I figured it was easier to ignore it.

However, sometimes it just goes overboard.

Once inside a clothing shop, I was in the changing room trying on a dress meanwhile my boyfriend was waiting outside.
“I wonder if there’s something weird with my clothes,” my boyfriend said. “The shop assistant keeps on starring at me, giggling.”
“Oh, funny,” I said, “maybe she’s got the hots for you.”
“I’m not sure. She’s almost a bit hysterical, and her face is all red.”
“Well maybe you should wait outside then. So she doesn't pass out of the excitement.”

My boyfriend obliged, and stepped outside the shop meanwhile I paid for the dress.
“That boy!!!” the shop assistant said, forgetting (?) to count the money I was handing over. “He is so handsome! He is the most beautiful boy I have ever seen!” She giggled like a ten-year-old.
“Oh really,” I replied acidulously. Oblivious to my sourness, she went on.
“He is so perfect. Is he your friend?!”
“My BOYFRIEND;” I corrected.
“Oh?!” She gave me a quick ‘once-over’ and started laughing uncontrolled.
“How old is he?”
“27”
“Oh, he is so beautiful, please tell him I think he is beautiful, please tell him I said so!” I could sense the desperation in her voice.
“Sure, I will tell my BOYFRIEND that you said so!”
“Oh thank you! He’s so beautiful….”

Yikes! As soon as I get my change I left quicker than quick.

And how does my boyfriend handle all the attention?
Well, he says he doesn’t care. But I know he loves it.
Posted by Jonna Wibelius at 10:09 AM

I bet you have probably got a lot of attention from Chinese men, too. No?

hahaha lol its nothing about ur boyfriend i think, chinese girls loves white boys. I dont count myslef as SO handsome, and not everyone stares at me like they do in china. But when i visited china i felt im the most handsome boy in the world ;D So its nothing about him, but him beign white :D I mean if u couldnt pass as VERY UGLY in your home land, you would pass as SO AWESOME in china(if ur white) lol :D Cheeers ;)

LOL - I agree with the first comment. There is MONEY to be made here :)