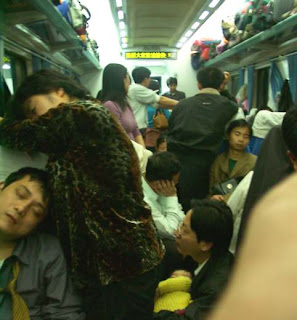 The first time I took a train in China I had a rather dramatic experience. I was going from Shanghai to Suzhou on a Friday night, and having no idea of how popular this one hour trip is to do at this time of the week, I went to the train station the same day at 1pm to buy my ticket.

The ticket seller almost laughed at me.
-Obviously there are no tickets left. Can you settle for a standing ticket?

Can and can. I didn’t have much of a choice. And standing for one hour didn’t sound too bad. I was fit. I could manage.

Seeing that I at that time had a full time job at a Shanghai magazine, which had its most hysterical time on Friday nights (meaning: we always did long hours of overtime on Friday nights. I was lucky if I got off around 10pm) , I arrived to the train only 10 minutes before departure. By that time there was a minor chaos on the platform. People where running around with their bags, hysterically screaming and asking guards which carriage they should go to. I normally don’t panic when there is 10 minutes to go, but seeing that everyone else did… I got a bit nervous, showed my ticket to an inspector (that pointed towards the end of the platform) and started half power walking, half running.

When I finally arrived to the right carriage I was met by a rather unappealing sight. The carriage was packed. Not packed as we say when someone has to stand on the bus in Sweden, but so packed that people where almost standing on each other, holding onto their bags, newspapers, kids and everything else you can imagine. I had to adopt a quite violent style to even get on the train.

Now this was in March and outside it was still freezing. Inside the carriage, however, it was sauna hot. I was wearing my winter jacket and had a heavy bag on my shoulder that I refused to put down, as I was scared that someone would try to steal it. Once the train started rolling I for some reason expected the pressure of being crammed in between people to ease up, but it didn’t. If you think the morning rush in the London tube is a pain, than let me tell you this much: you haven’t seen nothing yet. Not only was this carriage packed, crammed and claustrophobic; it was also warm, smelly and… warm.

I was doing well up until we passed Kunshan, a small industrial suburb outside Shanghai. At that point I thought I had got used to the smell and the heat, but suddenly I started sweating heavily. I let go of my bag and took my jacket off, but then felt extremely cold. Hot, cold, sweaty and nauseous… The feeling was way too familiar to be good. Moments later, I passed out.

I don’t faint easily, but when I do, I know about it at least 20 seconds before. Because then I feel like vomiting. And then it normally goes black.

The same procedure took place this time. The last thing I remember is that I tried to sit down on the floor (which was impossible as it was too crowded) and when that didn’t work I simply passed out. I suppose the fact that it was so crowded sort of saved me from hitting my head, as I never hit the floor, but the people around me. But anyways. When I opened my eyes I had 15 curious/concerned Chinese faces over me and I was escorted to a seat that was offered by a kind, elderly looking Chinese man (where did all the space come from?! Something big must have happened when I passed out, because people had actually moved away from me and I could stretch out my arm… just to find that my bag was still with me. Awesome!) The other passengers where being very kind to me, telling me that it is important to drink water before ‘such a long train ride’. All I could do was to nod and smile. And the rest of the trip I enjoyed sitting down.

That was my first and by far, most dramatic train ride in China. After that I learned that I should buy my tickets at least 6 days prior to the travelling date, in order to avoid having to stand up in a crammed carriage.

During spring last year, however, something fantastic happened. China’s new, fast D trains where put in use, and the travelling time between Shanghai and Suzhou was reduced with almost 30 minutes! The new trains where also clean, comfortable and spacious! Actually, they are heaps more comfortable that the trains I have taken in Sweden. And the prices.. Yeah well, that bit we can’t even compare! For around 30 kuai I can go from Shanghai to Suzhou. Now that’s how public transport should be! If you are travelling in China I strongly recommend these trains, just make sure you buy your ticket in time. 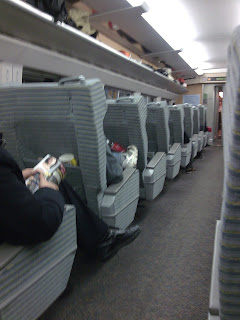 The new D trains. Quite some difference, huh?!
Posted by Jonna Wibelius at 9:44 AM