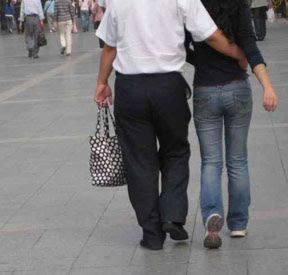 Spotted, on a windy day in Shanghai city: A trendy looking woman in high heals strutting about.
Behind her: her boyfriend/husband carrying three shopping bags, one large, pink, fake Gucci purse and pushing on a large armchair. At one point the woman turned around and yelled something quite nasty to him. His face barely moved.

Another time, in Century Park in Shanghai, I took this picture.. sort of speaks for itself, doesn’t it?! 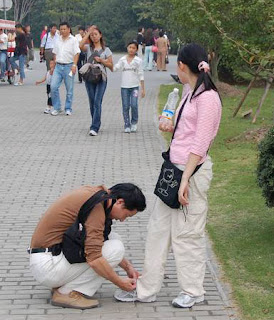 "And while you're at it Honey.. can u also remove the dog poo that I accidently stepped on?"

But really, what is the handbag fuss all about? Everywhere you go in China or Korea you see men carrying their girlfriend's/wive's handbags. Not only does it looks funny, but also quite inconvenient seeing that the men are normally carrying their own man bag on one shoulder, and then their girlfriends' bag on the other.

Asian men –speak now, or we will forever think that you’re whipped! 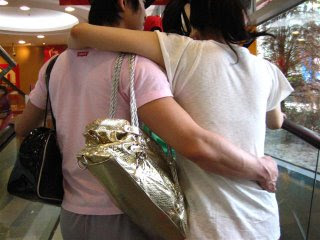 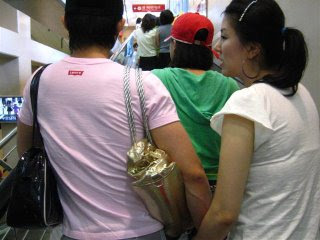 Posted by Jonna Wibelius at 4:14 PM

interesting. yet in Taiwan you'd find exactly the same.

i sometimes approach and compliment men for their obnoxious bag choice. they would just smile, girlfriends somewhere wandering around for the shopping items.

p.s. i'm glad to have found your blog. keep up doing a good work, Svenska flicka!

can't say the same for everywhere in china, but shanghai men are definitely more whipped than the rest of china.

can't say the same for everywhere in china, but shanghai men are definitely more whipped than the rest of china.

Ha, you got me. For men in china, it seems just a way to show their consideration(how they love or care ) for their gf/wife. In traditional idea of chinese society, men are strong and bearable, so they shall do the heavy or dirty job for woman, like carrying bags and so on. Well, there is also some counterexamples, my ex-gf just did not want me to carry her handbag, as she think it is weird for a man to carry woman's bag, and in fact, as we both know the handbag isn't heavy at all, she can carry it by herself.

Personally, I don't think we should call these men "whipped" because quite honestly, I think ALL men should be considerate enough to carry stuff for the women in their life. I mean, what's the point in making fun of men who are being sweet and romantic?

Maybe you prefer "macho" men who treat their girlfriends like slaves?? I doubt that....so............why would you want chinese men to STOP carrying stuff for their women?

A friend of mine told me this story and I thought it was incredibly sweet. She was on campus and she was carrying this box that was obviously too heavy for her and this guy rushes to her and insists on helping her carry the box to its destination. I thought that was sooooo cuuuute!!!

u wonder y, so many asian women do everything they can to find a white or not asian born/rised men... bc they can a real man!

Do rest of world (Eurpoe, USA) do we every enslave our women? at least we did bind their feet.

* its understood that china is so big that every freaking things can happen and not every asian/ chinese men is wiped or in short have dont have balls....BUT if u go out there are too many and i mean TOO MANY OF THOSE WIPED/ BONELESS MEN WIHT OUT ANY BALLS... ITS IF THEY ARE castrated.

China men remember u nation anthem
THE MARCH OF THE VOLUNTERR

Arise! All who refuse to be slaves!
Let our flesh and blood become our new Great Wall!
As the Chinese nation faces its greatest peril,
All forcefully expend their last cries.
Arise! Arise! Arise!

SO I CALL OUT TO ALL THE CHINA MEN ARISE! AND DONT A SLAVE TO YOU WIFE/GF... I KNOW U R SCARE THAT U WONT HAVE SEX IF U DONT TREAT THEM LIKE THEY ARE U 3 YR DAUGHTER, U GOT TO TIE HER SHOE CARRY HER BAG. (LOL JUST THE OPPOSITE IN MIDDLE EAST... IF U SEE INDINA/ABRAS IN MALL THIER WIEVES AND KIDS WALKS BEHINE THEM AND CARRY ALL THE SHIT)

sO PLEASE YOU ONW GOOD ARISE AND BE A MAN

I Leave in Altant and i have been seeing asian men carrying their girls bags, what is up with that?

From your cultural perspective you might think Chinese men are whipped. However, from a different cultural viewpoint that is not yours, it is considered polite for Chinese men to carry their significant's purse, making your viewpoint very ignorant.

It's such a pity that you have traveled to so many places yet you still have a narrow mind set. Perhaps, you need to have a constructive analysis of various different cultures?

Anonymous: Oh, another harsh comment from another, "not-as-ignorant-as-me-however-still-such-a-whimp-that-s/he-is-cowardly-enough-to-leave-the-comment-as-an-anonymous-reader". U know what, I'm so sick of people like you who take out your anger on bloggers and don't even dare to stand up for it!! Why don't u start a blog and express your opinions using your first and second name!

Who are u to tell me that I have a narrow mind-set because of one blog post?! Hahahaha, GROW UP! Look around yourself. Look into yourself. How narrow-minded are YOU, telling me that I'm silly because of a blog post? HAve u read all the 8263623 other ones?

Also, travelling itself does nothing to you. Communicating with people from different cultures, however, opens your mind to new ideas. There's a difference.

Since I wrote that post it's been 2 years, so you might wanna consider that opinions change over time.

Anyway, have a good, anonymous life!

I think it is very nice of the men to show their care and consideration for their wife/girlfriend like this, and must make them feel treasured and loved : )

Oh my, I'm so happy to find out your blog~ Hej! I'm Yao Fu from China, right now an exchange student in Gothenburg, and I'm actually writing an article on Swedish women, SO interesting to see our observations parallel! My email is flora051@gmail.com and welcome to contact me! /Yao Fu