In China, the term ’honesty’ has a whole different meaning than back home.

In China, you don’t sugar coat your comments. You don’t try and hide the truth. In China, you say as you think and if you happen to hurt the other person, well, then that’s just the truth that hurts, rather than your words.

Therefore, I cannot utter any personal defend to the following thing that happened to a friend of mine.

She was in a small, Chinese clothing shop when she decided to try on a dress. The mirror was outside the fitting room, so when she went out to have a look, she overheard the Chinese shop assistants offering their point of view:

-Look at that girl. Incredible how big asses those westerners have!
-I know! Big asses, and big hips. Looks stupid.
-Yeah, hehe!

Now all this was said in Chinese so what can you do? Well, if it would have been me I probably would have yelled something nasty back (in Chinese) but my friend was quite shell-shocked and simply left the shop without saying a word (and no, she didn’t buy the dress).

Some weeks later, I was in another clothing shop and just about to pay for a dress when the two smiling shop assistants behind the counter started talking to each other in Chinese:

Instantly, the memory of my humiliated friend’s sob story sprung to my mind. No way I was going to have this happen to me too?!

Me (in Chinese): -Why are you asking her if she thinks I am beautiful, how would you feel if I talked about you like that?!

Ahhhhh… I wish you would have seen the faces of Girl 1 & Girl 2. Priceless!!!

Well, they didn’t say anything else while I was standing there, but when I walked away I heard them burst into a hysterical laughter. Well, I suppose we all need our dose of daily fun?

And well, I guess compared to their tiny-non-existent-hips-and-bums and their pert little noses, us Westerners do look rather big. But that’s not something we need to be told, is it?? 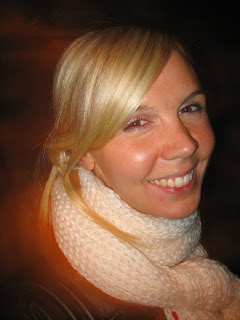 Yup, I guess my nose is the bigger kind.
Posted by Jonna Wibelius at 9:54 AM

Hey, just want to tell you that Chinese people have the same "honesty" as yours, you know, sugar coat or others :)
The assistants said that because they thought you don't know Chinese, and that's why they was shocked and laughed after you spoke Chinese. In fact, for most people in China, Lao Wai(you know,the foreigners) just don't know Chinese, so they think they can make any comments as you are invisible.

There is a famous topic about embarrass situations like what happened to you, you can check it~
欺负老外不懂中文的尴尬 (in Chinese, can you read it?)
http://bbs.luckup.net/dispbbs.asp?boardID=23&ID=24064&page=1

PS: I searched for blogs about Shanghai,and came to your blog. It's quite interesting to read some blogs about China, especially Shanghai, in a westerner's eye :D

I'm not good enough to read that yet... but soon! I have to say, though, that the more Chinese I'm learning, the more fun it is to be in China! It's like a whole new world is opening up for me!

while they are in your presence
just don't let them understand

It is quite typical of Chinese to comment on other people. I get that all the time in Shanghai. Sometimes it can be annoying but there is no need to respond in anger. Just take it easy!

LOL I think your nose looks just perfect for your face so don't worry.

I think those women weren't being "unusually honest". They were simply gossiping about you within earshot because they thought you couldn't speak chinese (you sure showed them huh! good for you!)

A lot of people would talk about another person within earshot if they thought they couldn't be understood. I know of a few hilarious stories involving such incidences (when the person who was being talked about suddenly turned and spoke in the language he or she wasn't supposed to know).

and seriously. Your nose looks VERY nice. ^_^;; not too big at all.