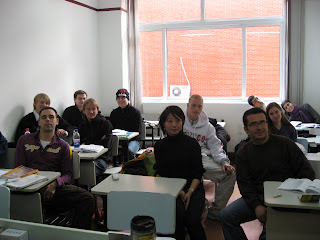 Oh the memories.. back at level 1 my class looked like this...

I’m glad to tell you that A. I’ve found a great tutor, and B. I made it into Mandarin Level 3 at my new university! Fair enough, I mean, I have already done level 2 at old uni, however, u never know if the universities have the same level. And you do need to take a placement test (consisting of one reading&writing part and one speaking part) if you're a new student.

Even though I was a complete mess at the written test, I managed to convince the two Chinese women who interviewed me as part of the speaking test that I can manage the level 3 standard. (I’m the same in every language I suppose: bad at spelling but good at speaking).

The first thing I did when I got my new level 3 books was to see how hard the texts were, meaning: how many characters I didn’t know. And it wasn’t too bad. Sure, about 50% are new ones but it feels soooooooooo nice that I at least now read a little bit better. When I started doing level 2 (I had then had an 11 months break since I did level 1) I was a complete mess.

I suppose one reason why my Chinese has improved is because I (during level 2) was in a class that consisted of only Korean and Japanese students. Seeing that most of them already know a lot of characters, they were almost fluent in reading and writing and that triggered me to study like a mad woman in order to keep up. A good tip for anyone who wants to learn Chinese is to study together with other Asians. It'll definitely speed up your learning!
Posted by Jonna Wibelius at 1:45 PM