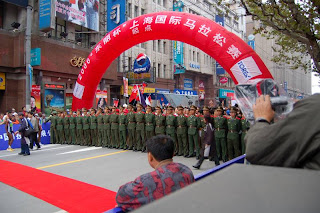 Fancy taking a race in China? 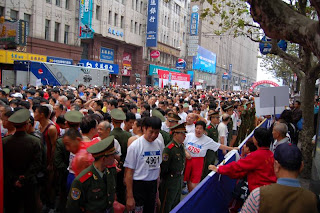 Just get into the crowd!

I’ve been a bit of a slack blogger lately, much due to the CNY holiday. The Chinese holidays always make me extremely lazy, much because of the fact that the cities get so overcrowded that I just want to hide inside with a DVD and take-away. Huh, aren’t I a super fun girl?!

But now the holidays are over (finally!), the crowds have gone back home (thank lord) and I have turned off my DVD player.

My university course doesn’t start until March so I’ve got plenty of time to kill, meaning: articles to write, Chinese characters to study and miles to run. Yup, you heard me. Miles to run.

Seeing that January was a very slow month for me (call me slow started) I decided to embrace the CNY as MY new beginning, so my Chinese New Year resolution is…. To get into the running again!

Once upon a time (hihi) I was actually a quite devoted runner who would feel terrible unless I did a 10 km run every morning. Then something happened, namely I broke my foot and couldn’t run for 6 months, and when I started running again, the nice feeling just wasn’t there. I still tried though, and in 2006 I ran the Shanghai half marathon. 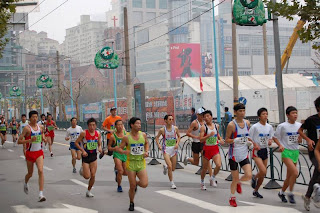 About the race? Well, what can I say. It was crowded. Big time! Like, big big big time! At the starting point (Nanjing Lu, close to the Bund) I thought I was going to get run over, however, in an attempt to keep up and not be stepped on, I started up with speed and ended up with a stitch, making the first 8km more painful than enjoyable. 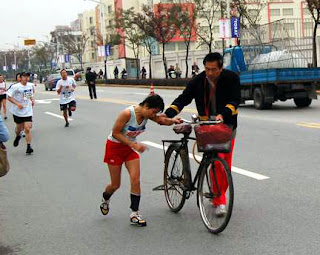 ...and I wasn't the only one who was suffering.

During the first 10-12km or so, the crowd support was quite good. There were taiji performances, dancers, orchestras, and you name it. Girlfriends, boyfriends, envious non-runner and a lot of annoyed Chinese people (that were stuck in traffic because the roads had been closed for the race) were also lining the roads shouting out everything from cheerful support to angry curses. It was perfect! 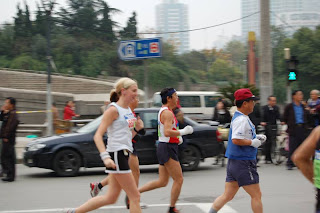 At 15km I hit a low. My legs were getting stiff (stupid me ended up running in mini shorts and a singlet… and it was the end of November. Doooh!) and my head was feeling heavy. The support had also disappeared as we had left the more commercial areas of the city.

Then, magically, my saviour appeared. A Chinese guy that suddenly ran up next to me and asked:
“Sprechen zi deutch?!”

I was a bit surprised and said no, although I am not sure if he heard me because he kept firing me some more phrases, and I kept nodding, smiling and looking confused back. As he eventually understood I wasn’t German, he gave up and asked me if I’d like to run faster. My legs were already killing me so I said that I’d love to but that it wasn’t possible.
“OK, so we keep your speed then!” he said, and settled into my jog.
“Uhu…” I panted, not really understanding what he meant. Was he going to run next to me for the last 7km?

Oh yes he was.

I struggled, slowed down, tried to speed up, wanted to eventually give up, but my new Chinese friend wouldn’t let me. He got water for me at the water stations. He literally ran behind me and shouted to me to go faster. He put a hand on my back and pushed me when I tried to slow down (does that count as cheating?!) and he kept urging me to go faster. 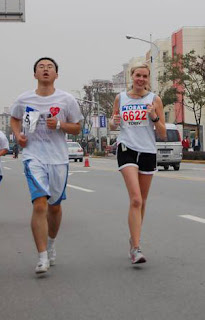 Here we are. Like peas and carrots after sharing those 7km together.

At the finish line we got separated as girls and guys had to do their finish spurt at two different spots. A bit silly, yeah, and even more silly is the fact that I never managed to find my running buddy again.

He is, honestly, totally responsible for me managing to finish at the time of 2 hours and 5 minutes (Which I think is decent due to my stitch and the fact that neither my body nor my foot were in their best shapes). My personal best (1 hour and 50 min) wasn’t even up for grabs so I’m quite happy with how I did.

Now, if anyone seen this lad, get in touch. I owe him a thank you. Or maybe a “Danke schoen”.

Wanted. Anyone seen him?
Posted by Jonna Wibelius at 12:44 PM