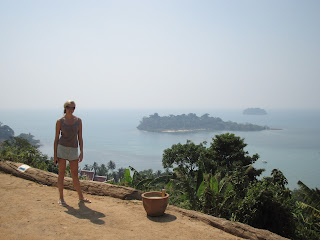 Next year I am so going to Thailand

One thing I don't like about the CNY is that there is no end to the fireworks/firecrackers. I barely slept last night due to the constant sound of firecrackers being set off outside my window. At one point I was so sick of it I decided to skip sleeping and simply just get up and watch the 'fun' and I actually became a spectator of two quite interesting events taking place outside my bedroom window during the cold, Suzhou night.

Event one: Grandpa setting off fireworks wearing his finest silk, matching pyjamas. Son and grandson watching from the side, letting the old man do the job.

Event two: A black car pulling up at a parking spot. Three grown up Chinese men getting out, bringing with them what looks like a giant firecracker bomb. They place the 'bomb' on the ground (in the middle of all the cars), light it up, then run back into their car and speed off! As the car drive away the 'bomb' explodes and all the car alarm goes off... wow! Almost as if they were in some sort of firecracker battle?
(I waited expectantly for something else to happen after this 'hit and run' but 'unfortunately' that was it... Might go and have a look in a bit though, it sounds as if they are (still) blowing up the whole yard outside our window.)
Event three: Fireworks exploding outside our neighbors balcony, shedding some light on the dead chicken that they have hanging out there (dried meat it is a must during the CNY)

Now, if setting off firecrackers during the CNY is meant to bring luck and fortune (and get rid of evil spirits -or something like that?) I can tell for sure that everyone (except for us) living in our complex are going to get dirt rich this year, the way they have been burning fireworks. I just wonder if people still believe in all of that or if the setting off firecrackers is more like something you 'should do' just because it's a new year... If so, how come people don't get sick of it? Fair enough, a day, two days.. maybe even three... but ONE week?! One week of non-stop explosions... Gosh, next CNY I really HAVE to get away from here (even though I have to admit that I enjoyed watching the old PJ man and the three 'battle guys' -the dead chicken I could have been without).
Posted by Jonna Wibelius at 9:47 AM

I'm smiling while reading this entry..that's the joy of celebrating CNY in China =)

I'm an expat living in China too - in Guangzhou and this is my first Chinese New year in China. Extremely disappointed I must say - the authorities have banned fireworks in Guangzhou and there's an eerie silence. Everybody seems to have gone off to their home towns or are inddors. The streets are deserted, the shops are closed and its difficult to believe this is a festive time !!

Fairuz -yeah I know u are right... I guess I'd be smiling to if I'd had a good night's sleep... Well well, only once a year!

Ramesh -U should head to Suzhou! And not only during the CNY but any time. Over here, fireworks are legal all-year-around!

I suggest the Philippines, although I have never been to Thailand I admit. My wife and I just got back from a week on the beaches there and I must say that it was beautiful being away from my first CNY in 3 years.

Firecrackers are still going a bit now that we're back, but I know from experience that it's nothing like it has been.

Josh -ah that sounds lovely, u guys did the right thing going away. We were also looking into going to Cebu but prices were just too high so we ended up staying in China.. like always.

That must have been an intersting sight!

Ya i think all the foreigners don't like these days in China, so do many Chinese people.. But it is an old custom... Just like, not all Chinese people like your festivals such as Halloween or X-mas..

Alex -Still haven't met someone who doesn't like the CNY in China... I guess those people don't speak up loud. Might offend others. In Europe, however, it is really common to meet people that cannot stand something like Xmas...

When was the last time you saw the Grinch light up some fire crackers to blow things up? No wonder ppl are depressed about the commercialized xmas holidays at this age of the time! They need to get a good smell of the gun powder and some noises!!!

Thailand is good, but there are a lot of Chinese living there, being the the largest minority. I'm not sure about the peace in Bangkok during CNY, but on the beaches you should be fine.
Good value for money, and an easy country to go around.

Miss Jane -u r starting to sound like a real firecracker junkie.... ;)

新年快乐！
The "reason" behind the traditions of the CNY are much like the reasons behind Halloween...No one really believes in the myth, but it's a great excuse for some fun, and continuing tradition is always important.

The story goes: There was once a monster that destroyed an entire village two winters in a row. The third year, they prepared with red decorations, drums and fire crackers to scare it away. This is why the CNY is decorated with a copious amount of red and the firecrackers are set off so much.

(I just attended a festival at school for which I had two sing two songs in Chinese...and we were given a rough history on it.)

PS Come check out my blog if you a. are into politics, b. are into ethics, c. are into social sciences, d. want to decide where i should study abroad! yay....

Hi Jonna, Fireworks will be here for 15 days up to the Lantern Festival. Last night and tonight fireworks are a must. They are being set off to receive the god of fortune! Be sure to go to the lantern festival. It will be so crowded and it is a traditional event. Last year my family went and we got crushed by the crowds. This year I was told I will be going alone.

Philippines has this culture too-but I guess it isn't as much as the chinese do, at least we do it only on the New Year's eve and Christmas eve. An ESL student from Korea complained about this stuff to me before, like how you felt about the firecrackers...so I was smiling reading your post...

I love your blog by the way

Nice for those who can get away.

I am in Sagamihara, kanagawa Prefecture, Japan. I am an exchange teacher from Maryland, USA. I like your blog and its adventures. I also have one at http://anafricaninjapanteachingefl.blogspot.com

Nice Blog! I lived in Japan for a year - they didn't have blogger then - GREAT IDEA - keep the stories coming and have fun!

Think positive and be happy because bad have some good too.

sssssssssshhhh, don't rat me out now!

I am sure there will be more fire crackers on Feb 9th as it's 元宵.

I went to sleep around midnight to the sound of fireworks. I woke up at about 3AM and people were still setting them off.

Ride China -Oh yeah the lantern festival... I think one visit to Shanghai's old town during that time of the year is enough for a lifetime! I'll be doing like your family this year... keep inside :)

Event 2 had my full attention!!

I came across a photo on the news showing a whole city filled with fireworks. An amazing sight really. In Malaysia, lots of Chinese here made a lot of noise with fire crackers and fireworks too. Chase away the last year's bad luck and for prosperous new year. Across the sea in Singapore, fire crackers and fireworks were banned many years ago due to fire that destroyed a large housing area. Malaysia actually banned firecrackers, but somehow people still manage to buy them.

Jonna - You never met anyone who dislikes CNY in China? I HATE HATE HATE it. How more clearly can I put it! Thailand was heaven on earth by comparison. Did not want to come back.

I mean, celebrate all you want on new years eve, but enough is enough!

The fire crackers will continue for another week and the 15th day (February 9th) is Yuan Xiao which is another BIG firecracker night, so enjoy!

Nice post. I for one, as a Chinese, never really liked CNY, not for the fireworks/fire crackers, but more for the massive traffic jams I got stuck in (driving home), never ending visits to relatives' homes etc. Though its nice to spend some time off work. Never been to China during CNY, I've been to Shanghai though, love the scenery and weather. I'm in Malaysia btw, come visit!

I'm glad that I found your blog. I've always wanted to know more about living in China.