Having a laugh with a bunch of strangers 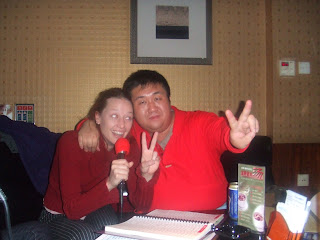 Yesterday when I walked into the women's changing room at the gym I was met by loud female voices having what sounded like a heated discussion.

In any other country I would straight away assume that there was a minor cat fight going on, but in China, loud, female voices is part of the normality. Five minutes later they were all laughing heartily together.

Curious as I am, I wanted to know what they were talking about. They spoke too fast for me to get everything, however, I understood that they were discussing different habits at different places in China as one of the women said:

-Ah that's so funny you guys don't do that over here! You know, I am from northern China and over there we all do!

-Really?! That's so strange! Said another woman. Here in Suzhou we don't do it.

A third voice chipped in:

-Where I come from no one does it either!!

-Oh, so how do you do things there?

They all started laughing and went on discussing their differences in habits. What exact habit they were talking about I didn't get, as they were at the other end of the changing room and my hearing isn't that good. But what I got from the conversation was that they obviously didn't know each other, but were just happy to chat away and tell each other about their different, home town habits. I found their discussion, as well as their happy laughs to be quite funny/cute. When I rode home later the same day, I tried to imagine the same discussion going on at the female's changing room at a gym in Sweden:

Stockholm (capital of Sweden) girl: Hey you shouldn't put your things over there, that's my space.

Girl from (what the citizens of Stockholm regard as the country side): southern Sweden's Skåne province: Oh really? Well sorry, I didn't realize? Can't we share the space?

Stockholm girl: What?! Sorry I cannot understand your dialect.

Skåne girl: Ah come on! Give me a break, of course you can.

Stockholm girl: No, I can't. You sound like you are from Denmark.

Girl from northern Sweden: What's the problem here, what are you two talking about. Isn't this a public space everyone can use?

I believe that in Sweden, even though the slightly different dialects are NOTHING compared to dialects in China, people would be too busy on being rude to each other/making sure no-one interferes with their personal space to ever be able to have a discussion with stranger about different habits in the north and south.
Posted by Jonna Wibelius at 10:03 PM

That's the ultimate insult - accusing someone of being form Denmark, LOL!

I wasn't there but I guess they were discussing wearing a shower cap in the shower :-p

For the record, I never do, but I'm not from the north!

Jonna, I have an interesting personal question for you since you wrote about female locker room experience in China. I am a female college student from Taiwan studying in the U.S. Last spring break, I went on a trip organized by an international student group in our college. Two Mainland Chinese girls and I stayed with an American host family. When I was taking shower one night, one of the girls just popped in and started undressing herself (to the extent of totally naked) even before I was done in the shower. I was very embarrassed and shocked to say the least. I covered myself up quickly, got dressed and then got out of the bathroom. Then the other girl went in and I guess she did the same. They were practically showering together. I know they are good girls. I later learned that in China girls don't care about being naked with other girls. In Taiwan, girls will never do that. It's just embarrassing. Guys may do that in their locker room. Have you experienced any of that in China? I don't believe American girls would do that, either. How about in Sweden and other countries that you have lived in? I was so shocked about bathroom etiquette with Mainland Chinese women.

Anonymous - A lot of Americans would be appalled, but I would say most female athletes in the US have experienced big room-like shower rooms after a game in the locker room. It is awkward at first, but you do get accustomed to it.
The chinese ladies in my gym don't seem to care and walk around totally nude all the time.
My only problem is when they bring their 8 year old boy in the female locker room and shower with them. If that happened in the US someone would raise hell and call child services. That is when I pack my stuff up as soon as possible and head home!
Jonna - Have you ever experienced that in your gym?

Anonymous: I hear you! From what understand, people's attitude towards being naked is completely different here. In changing rooms, there are naked people everywhere, totally shameless, walking around, blow-drying their hair, chatting... all while butt naked!

Funny because Swedish people have this reputation about being quite 'liberal' when it comes to being nude (eg. topless tanning at the beach) but I feel like the most prude person ever when I am in a changing room in China, trying to cover myself up a little bit.

Woai -well there's a bit of a dialect war going on in Sweden... the Stockholm people claim they cannot understand us country people from the south... even though our dialect has very little to do with Danish.. I wouldn't mind being Danish actually.. they are apparently the happiest people of this world?! Busy eating 'pölse' (a red hot dog) and drinking Tuborg (beer) every day I assume. I guess that would make anyone happy!!!

Njd - oh yeeees... that happens all the time at my gym too. Little boys join their moms in the shower. I stopped showering at my gym a long time ago. I can handle that people stare at me when walking on the street, shopping or eating, but to stand naked in a changing room and have people (without any sort of discreetness) staring at you, and really LOOKING at you body.... nope, that I cannot take!! It doesn't matter if they are 'just curious' or think my 'white skin looks good,' I don't want strangers to stare at me when I am naked.

Jonna have you forgotten the conversation with Rocky already? It's not that "white skin looks good", it's YOUR skin that looks good, LOL

Jonna, I wouldn't shower at my gym if you paid me, for exactly the same reason.

Anonymous from Taiwan, I am a little tickled by you expressions of horror and your suggestion that you "don't believe American girls would do this" as if it were some kind of moral shortcoming of which you feel obliged to presume us innocent until proven guilty. That's silly. I don't mean to be rude, but it is. It's a matter of habit, and many people (American and otherwise) would consider this kind of boldness to be a mark of psychological health -- of comfort with oneself and one's body, of ease in one's own skin. (I don't happen to share this view, by the way: I think it's neutral, neither bad nor good. I'm just reporting what I know to be a reasonably common opinion.)

Anyway, some American women dislike undressing in front of other women and others are very casual about it. When I was in boarding school in America, we all shared a bathroom and it was easy to see a range of attitudes.

I think in PR China there is just no option a lot of the time, because of the crowding. College students have to shower together, or at least they used to. It was that or stay dirty.

Wow! So it is Mainland Chinese thing for ladies to be naked in locker room and not feel a tad embarrassed. How strange is that! Maybe some Mainland ladies can shed some light?

Yes it's very normal for girls to shower together in China they definitely don't feel the same need for privacy. If you go to clothes shops often one girl will be in the cubicle trying on a dress and another girl will just squeeze in and change as well, even though they're strangers. It saves waiting. Seen it a lot of times in the lower end clothing stores.

And in some mens toilets here, there's a place to pee and a place for "number 2" all in the open. So I've walked in to pee and there's a guy sitting there having a crap, basically. Takes getting used to!

woai -that's a mental image I rather skip!!

I love that pseudo Swedish-Girls-in-Gym-Bathroom dialog! You should add another line after the Northern girl's response: (from Stockholm Girl) "What? Can you talk any slower?"

Equally open in the mens gym too. men buttnaked letting it all hang, and the female ayi comes in to mop the floor getting an eyeful and sporting a sly grin

Our high schools require students to shower after P.E classes, and the showers are always out in the open with no stalls, so we get used to it at a young age.

At my health club I'd say it's 50/50. About half of the women are shy and don't want to be seen nude by other women, and the other half aren't bothered at all by being seen nude in the locker room.

Personally, I don't see what the big deal is about being seen nude by other members of your gender? If I knew for a fact that a woman in the locker room was homosexual, and if I knew that she wouldn't stop staring at me, then I might be slightly uncomfortable with that. But otherwise I have no problem showering and changing clothes in front of other women.

I've always admired the cultures that are casual in their attitudes about nudity. I don't mean that I'd prance around nude in front of men, I don't. But I view it that if you can't be comfortably nude in a locker room with only other women around, then when can you be?