Learning English with the Housewives 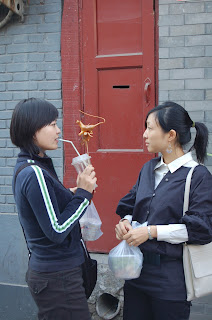 Yesterday I met one of my Chinese friends for some language exchange. Since I went to Sweden over Christmas we haven't caught up for a while and I was really surprised when we, after one hour of speaking Chinese, switched to English, and her English sounded.... awesome?! Like... really good?! Much, much MUCH better than it did 1 month ago when I last saw her.

-What have you done?! I asked her, mouth half open as a result of her completely wow-ing me with her new language skills.

Turns out that this Chinese girl had gone through many American TV soaps, only to find Desperate Housewives to be the one with the 'best, most everyday English' (Note: I am quoting her here, I am not saying I think so... I am not quite sure if I would call the Desperate Housewives language for 'every-day language' but well... I am sure there is something useful in their dialogue. If nothing else, at least a lot of infidelity phrases?!) and that she had watched the show on an every day basis, in order to learn 'their language.' When she realized that she didn't understand everything they said, she went to a book store and bought herself a script of the whole season 1 and 2, so that she could read it and learn it by heart.

-So... how do you do it? I asked, still quite astonished and impressed with her sturdiness.

-Well, I normally sit in my room and read the dialogue out loud until I know it by heart. It can do like this (adapting an American accent): "I am not working every day so that I can pay for your plastic surgery."

Oh my! Now that's a new, and kind of interesting method of learning English?!

Well, regardless of what, it obviously has done wonders to her English. Not only does she now have a bigger vocabulary compared to before, but she also sounds more... American?! I can't do anything else but applaud her for being so driven and dedicated. It's truly inspiring! (even though it also makes me feel like a bit of a loser for my own, slow, Chinese progress -what's the Chinese soap equivalent to Desperate Housewives, anyone?!)
Posted by Jonna Wibelius at 9:16 AM

OK, well, this is definitely no "Desperate Housewives," but, if you haven't seen it already, I would recommend trying 家有儿女。 The vocabulary is DEFINITELY very ordinary and everyday. It's unlikely to teach you many new words, but it's good for cultivating a Beijing accent (supposing you happen to want one) and generally improving your fluency in a gentle, passive sort of way. Try 青海电视台 at 10:20 in the evening, seven days a week.

Also, if you're interested, Professor Feng Yu (Associate Director of the Chinese Language Program at Harvard) has a collection of colloquial usage and expressions based on TV shows. It's called "Pop Chinese." Each entry gives at least one attestation from a popular soap or sit com.

I think your friend is using a really clever way to improve her English.

Watching Lost and other such TV series with Chinese subtitles did wonders for my character recognition.

I also enjoy watching 鲁豫有约 ( I might have recommended it to you before).

In my opinion, it's great for picking up conversational Chinese as it's a chat show and the topics they discuss are usually very interesting. The subtitles are also in traditional characters so they force you to listen rather than read.

One of my favourite episodes is 新上海人 - perhaps you should have been on it as well? :)

P.S I'm also very interested in the teaching of English in Sweden, considering the very high level of fluency Scandinavians in general have (In most cases higher than a 'native' speaker!).
How is it taught? Is the emphasis on oral more than written?

If I may quote something I just happened to crome across yesterday:
--
The two Chinese "Sex & the City" ripoffs are called:

I've seen things like this before. A friend of mine here speaks amazing English with practically no accent. He sounds like an American with Chinese parents. He says it's because he goes out and buys a lot of American movies. He's seen a lot more than I have.

Also, when I was taking me TEFL course, one of the people I sat next to insisted that listening to rap music was a good way to practice English.

That's great, this is a clever way not just to learn the language in a real-world setting, but also to learn a lot about the culture--if you're interested in more than just the language.

Meteor Garden I & II (流星花園) was very popular in 2001, it has a deeper (love) story, too. I'm sure you could find it on a DVD that has both Chinese (Traditional, unfortunately) and English subtitles. YouTube, Youku and the like have it, too. I'd love to buy the script of it like your friend did, but these are hard to come by outside of China.

i've studied chinese for 3 years and i still cant carry a conversation. sad, aint it? and im chinese..... very sad, aint it?

I grab all the Chinese sound and video I can off the Internet. Sooner or later you will need a sounding board like a Chinese speaker to see if you make any sense. My problem my local Chinatown speaks Cantonese with a little Mandarin thrown in. We have several college campuses that teach Mandarin. My school district now teaches it starting in elementary through high school. Ive been thinking of hosting a foreign exchange student who speaks Mandarin or finding one who wants to make a few extra bucks working with me.

Again someone published one of your entries in a Chinese website:

You may not access this site in China, thanks for the great China firewall. Just wondering have they got your permission to do so?

I remember the time when Japanese soaps are popular and everyone was learning Japanese by watching lots of Japanese soap.

It's very smart of that girl to learn English from the show, but let's hope she won't learn the drama written in that show. I love the narrator's voice on DH.

Cheers for all the tips guys. I have some TV-watching to do! Shame I get so impatient every time I am in front of the TV. But for the sake of improving my language skills I better learn how to sit down and just... watch movies/soaps.

Anonymous: I cannot view the link... and no.. of course they have not asked for my permission. Will u help me sue them?! ;)

No need to sue them. Just hope more locals can realize they need to change some of their bad habits. Your article helps.

Jonna I can see the link. The other Anonymous was right. You were ripped off. I guess you can take some solace your blog is worth plagiarizing.

Hey Jonna, at least you can learn some new Chinese vocabulary from the Chinese translation of your blog. But watch out, though. The Big Brother is watching.

Thanks for re-posting anonymous. U know, the translating of my post has been going on since I started blogging. No one cares to ask if they can re-post or translate, but by now I am so used to it I have stopped caring. So 'sue them' was a joke..

But when u write: 'watch it, Big Brother is watching' I don't know what u mean. I write a blog about China. Is that somehow illegal/wrong? I don't think so.

Jonna, I meant to tell you to avoid any topics that may be deemed political by Beijing. Just be political aware and avoid it. The definition of politics varies in China under different political climate. Last year before the Summer Olympics, any discussion of the weather in Beijing could be deemed as political. The fact that your blog has been frequently translated means they are at least watching you.

I think it is impolite, even illegal, to translate your articles without your permission. If you find such translaters, you should tell me not to do it anymore,otherwise you could contact the newspaper agency.

PS: Why not try to write your stories in Chinese and send it to the famouse newspapers, like Xinmin Evening Newspaper at Shanghai. It is a good way to improve your written Chinese. You also can easily find help of revision from your Chinese teachers and friends. I think the locals here, Chinese readers, are interested in the eyesight from foreigners about what happened everyday here.

I remember a few years ago (okay, so it might have been more than a few . . .) that they used to teach English in foreign countries by using Monty Python sketches--I kid you not. I can't remember the exact reasoning other than it had to do with exaggerated speech and clear pronounciation.

Anonymous: Well, this is not a political blog. I just write about my every day observations, as well as things I see, head, and experience in China. I don't know how that could somehow be taken as political content...

Jun -I dont think my Chinese is up for grabs for Newspaper writing yet.. (ehum). But thanks anyways :)