One week of time out 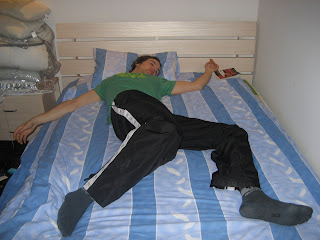 Taking some well-deserved time off. See you after the spring festival.
So here we go again. A week of CNY celebrations kicked off 2 days ago. In a city like Suzhou, the results of China celebrating its most important yearly festive season, are evident. Shops and restaurants are in general closed and even my gym, that is pretty much ALWAYS open, has put a 3-day 'closed' sign on their door. In a way, it feels as if the whole country stops functioning. Sure, you can still grab your coffee at Starbucks or buy your groceries at small convenience stores like All days, and the guards at our complex are still looking bored and grumpy while guarding our gates. But try to go on with your daily activities, such as an afternoon of language exchange, and you'll hit a dead end. My two language exchange partners went back to their hometowns during the first week of January.

The whole of January have been an endless talk about the spring festival. And when everybody are busy planning something as big and as festive as the return to their home cities for a week of eating and celebrating with their near and dear ones, it is as if a good deal of the people here stop looking further into the future. We mainly noticed this when we in December tried to find a Chinese tutor for my bf (as he has decided that it's time to improve his vocabulary). It was useless:

"Sorry, no new students before the CNY!" they said at a Mandarin learning center.

"Sure, I can teach him" said a friend of mine. "But I cannot start until after the CNY!"

I understand them completely: the CNY is the biggest event of the year over here. But it was still more than one month away.

Another interesting thing we have noticed is that a lot of people don't want to take on any obligations related to the time after the CNY. I know that this is mainly because they are not sure they will return to their jobs/current cities of residence once the spring festival is over.

In my bf's case, the situation seemed to repeat itself: his company eventually found him a tutor that had agreed on coming in to give him a trial lesson two weeks BEFORE the CNY.

The same day as she was supposed to come the company received a phone call from her mom, telling them that her daughter wouldn't be able to come in for the lesson, or teach in the future, as she'd found a job in another city and was moving immediately.

I asked one of my Mandarin teachers from the university and she said she had a friend who could do it (although not start until after the CNY). However, when the company called him to set up the details around the job he too had decided to move town and job and said "thanks but no thanks" to everything.

Coincidental or just the way it is at this time of the year in China?

Well at least we have learned on thing: don't try to do anything in China before the CNY.

(Fingers crossed that my 2 language exchange partners return to Suzhou after the festival. I've kind of taken a liking to them)
Posted by Jonna Wibelius at 11:23 AM

I know how you feel. All of our Chinese friends have gone away for a couple weeks. My appartment is the emptiest it's been since I got here.

Glad to hear your boyfriend is learning Mandarin now. I've aways wondered whether or not he could speak any.

Are you trying to tell us that you're taking a week off too (from blogging)? :)

Tripfriend -but didn't u go to Chengdu?

Little tiger -oh no... I am too blog-obsessed to stay away for a week... ;) just warning u guys that since there is very little going on here the quality of blogging might go down an inch.. or two... :/

I lefe suzhou in early 1998 after working there for 9 years and did not go back ever since. Reading your blog and getting to know suzhou is one of my hobby.

They really take their vacations seriously don't you think? And none of them seem to stay in the city during the vacation!

Chris -yeah well it is because most people in China only have this one week of holiday during one year and it is there only chance to go back to their hometowns and visit their families. So yes -it becomes a really big thing here, which is totally understandable.