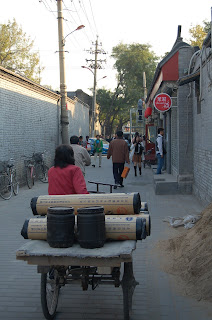 Some days ago I met up with a Chinese friend who's working for a western company in Shanghai. Over dinner, he shared his thoughts and ideas about working for this company, something that I found kind of interesting, mainly because he wasn't necessarily positive. Many of my Chinese friends who are currently working for a Chinese company always tells me how they dream of working for a foreign/more international company, that runs its business the 'foreign way' (when I ask them what that means, they often say things like: 'more independent work, more responsibilities, more understanding boss, less unpaid overtime, more holiday') rather than the 'Chinese way' (hierarchy system). As it turns out, however, the image of what it 'could be like,' is rarely close to reality.
My friend's complaints were many, but some of the key ones were about the company's management. According to my friend, the western boss (who doesn't speak any Chinese) had too much trust in the department managers, and no complete idea of the real working situation.

He claimed that the department managers relied on their fancy title (+ the fact that they had a lot of freedom in their work), and that none of them bothered to work that hard, leaving it up to their individual team to make sure something got done. Communication between the managers were poor. No one cared about what other people/departments were doing/working on, but one departments focused only on its own tasks. Although everybody were supposed to have more personal responsibilities everybody became real modest when something went wrong, blaming it on each other. No one stepped up to take the blame, no one said they would make sure it wouldn't repeat itself, and, (most importantly), no one even cared about solving the problem. Gosh... I just sat there listening, thinking about how insanely chaotic is sounded. It is almost as if you want to go to that company's big manager, give him a big shake, and tell him that maybe the 'western way' isn't that good if you're not willing to take time to train your staff and teach them what 'take responsibility' and 'communication' really means?

-So what are you going to do? I asked my friend. Speak to your boss?
-No point. He said.
-But... like... what? You're just going to sit there and suffer in silence?
-Yeah.. well for now. You know. The big boss has no idea what is going on. So it is easy to go on for days without doing much work. I can just blame it on others if someone gets mad. Just like everyone else does.
-Hm... doesn't sound like a lot of fun to me.
-Well I am not going to work hard. No one else in my team does. And we all get the same salary anyways. There are no rewards for the hard-working ones. I bet if the boss had a good look around he could fire 50 people on the spot simply for not doing anything. Most people spend the day playing computer games.
-OK...
-I will probably quit in a bit.. you know. As soon as I find something else. Maybe then I will tell the boss.
-Like, before you quit?
-No... I mean. When I have found myself a new job and moved to another company. Then I think I will write the boss an email and tell him about everything going on at his company that he probably has no idea of.
-But then it won't make any difference? Why don't you tell him now instead?
-No... I don't want to risk anything. I think he will appreciate the email more then than now.
Hm... an interesting conversation, and interesting attitude towards sharing information with the boss/problem solving (because even though this guy seemed keen to 'make a difference' he wasn't willing to actually try to change anything himself. Not even to talk to his department manager? 'Makes no difference, I don't want to do or risk anything' was all he said).
From what I have heard from other western companies in China (by speaking to staff as well as western CEOs) this situation isn't that rare over here. A good flow of communication seems to be the one thing that most companies are struggling with. And one thing I often hear from my Chinese friends that are working for foreign companies is that 'their foreign boss has no idea what is going on.' But when I ask them all why they don't 'enlighten' their boss about the problems, they all look at me as if I was mad. Still, many Chinese people dream of working for a western company. Obviously, their idea of what I could be like is completely different to the reality.

Posted by Jonna Wibelius at 9:40 AM

What a contrast between Chinese and Western culture (corporate culture that is)!!! Generally speaking, Asian countries, like Japan, South Korea, Taiwan and China, has a very clear corporate hierarchy. In Korean movies, subordinates in the office usually bow to their superiors and always bow to the upper management big bosses like CEO, Chairman of the Board, and president of the company. Do Chinese employees bow to their superiors? I don't think so, but things might have changed since I left China.

I know a big Taiwanese textile company in the U.S. where many Taiwanese students were employed after their studies in the U.S. There were also many American employees. Whenever the big boss came to visit, all Taiwanese employees were expected to show up at the airport to greet their boss and then show up again to send the boss off. One time, one Taiwanese employee didn't show up at the airport when a big boss came because he and his wife just had a baby. He got reprimanded later for not "showing respect." This type of kowtowing was not required of American employees. Go figure.

Thank you Jonna, this post really enlightened me about something that I have been wondering.

Certainly not all western companies are well run, and not all Chinese companies are bad to work for and I think the distinction will only become smaller over time.

Obviously Woai (being not only Shanghai's best dressed, but also a being the highly intellectual kind) is right. I don't want to come across as if I am generalizing, saying that 'every western company in China is badly run' or that 'all Chinese people have the wrong idea about working for a western company' because that is of course not the case... I guess what I wanted to point out with this post is that it is funny that so many Chinese people that I talk to have this sort of romantic idea about working for a foreign company, meanwhile the ones already working under a foreign boss often have various complaints about the boss.

I just find it a bit ironic, and I think what it all highlights is a lack of communication between westerners and Chinese at a workplace. I am not saying it is like this at every single place, but at many work places I believe... My Chinese friend who would rather quit his job but to tell his western boss what he is disappointed with sounds kind of extreme, but something makes me believe that it is not so uncommon over here. Obviously it will change over time. Or well, let's at least hope so.

Anonymous: I have personally never seen a Chinese employee bow to their superiors. My Korean classmates, however, even bow to our teachers!

Some Chinese people in the company I work for told me they dont want to ask or critize our boss with things that any employee would be furious about in any other country. They told me they are afraid they would lose their job if they did so.

Though our boss is a really nice western guy who never would fire anyone that complained about anything.

That Chinese employee doesn't want to tell his boss while he is working there because he is afraid of getting fired. As long as China doesn't have insurance against unemployment, workers have to be on the safe side to make sure they always have enough money.

Emil/Afritzse -yeah, and with the new labour law bosses can't even fire staff 'just like that'.

I get the feeling that the western boss at my friend's company is also a quite laid-back man. He just has no idea, that's all. And I don't think he would take it the wrong way if the guy told him. But it seems like people are so scared of getting fired they refuse to speak up. Despite the new law protecting their rights. Maybe it will take some years still before people get used to the fact that they can express a complaint without the risk of losing their jobs.

I read in your other post that "Big Brother" might be watching, so I'll stop being critical of anything happening in China. ;)

When I see a company with no communications I see a company barely making it. I wonder how many foreign companies in China are doing well. Its easy to stay afloat in economic development zones where there is little or no tax. We do that in the US to some degree. A nearby big box store wont have to pay property tax for 25 years. Its assumed jobs and sales tax will make up for it. Id say you are taking your career chances if you dont work for a Fortune 100 company from the US. Im not sure how other nations rank their companies.

Intellectual? Moi? LOL, thanks Jonna, not sure what I did to deserve such glowing praise.

Apart from concerns of offending one's boss or losing one's job, I think Chinese employeed are used to keeping opinions to themselves instead of telling superiors. Chinese culture does not expect the subordinates to share opinions with their supriors. Even if they work for a foreign boss they tend to be very passive in terms of communication with the upper level. However, if their foreign superior assure them of the privacy and security and take the initiative, many people out there would have an opinion to share. Or it takes a unique, brave Chinese to start the communication....I think that boss just does not know this yet ....

Leadership and a staffing problem. Sound like this company is getting it all wrong from the top down.