First exam and thoughts about the future 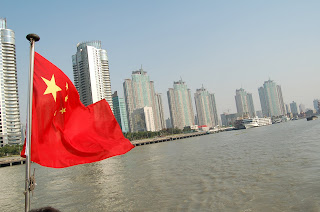 Had my first exam yesterday. My first spoken exam that was the ’written part of spoken Chinese’ (how does that even work?! Ask our teacher and he will tell you that 'in order to speak you need to be able to know how to write everything you want to say…' or something like that). The teacher (our lovely, 口语 老师 -kou yu teacher) had said beforehand that the exam was going to be ‘soooo easy’ that most of us probably only needed 30 min to complete it, although the absolute maximum amount time that we could use was 50 minutes. Do I need to mention that no one (not even A-student girl) finished within 30 minutes and, that after 50 minutes, a lot of students hadn’t even started on the last part, which was to write a dialogue. Yeah, that’s right. Write a dialogue. Now that’s a skill I’ll take with me later in life…

However, this was just part one of the test, the second part (where we actually get to speak –weeeehooo! We have something like 5 unique minutes each!) will take place this Friday. We have to prepare 4 topics (he has decided which ones, everything from ‘ideal work’ –easy, I hope I get that one to ‘downsides with raising pets’ –less dogs for the public to eat? To ‘how our home country preserves culture and history’ –probably the hardest one) and then on the exam day he will chose one out of this four that we then have to speak about for 5 minutes. Now if this isn’t testing our speaking skill, what is?

Still, I DO think this teacher is right about one thing: he gives us exams after every 3 chapters. That’s the best thing I’ve experiences so far in exam-China, because it gives you a chance to actually LEARN the words/grammar from these chapters rather than pushing too much information (from 10+ chapters) into your brain some days before the ‘big, final exam.’ So there we go. He’s not totally out there.

And speaking about exams.

Yesterday I realized that as a result of me being late to one of my HSK lessons last week, I totally missed out on the information the gave in the beginning of the class about signing up for the April HSK exam. So, when I went to enquire about it yesterday they told me that it was already too late to sign up. Ahhhhhgrrrr!!! Note to self: never be late for lessons. And pay more attention to information boards. Don’t just walk around and think about what you are going to have for lunch all the time…

Solution: sign up for the HSK exam in June instead. (Does anyone know when it is?)

Then another question has bubbled up to the surface. A quite scaaaary question actually…Namely: the future.

What do I want to do this fall? Continue with level 6 at the university? (not tempting at the moment... although in a way I feel this is what I 'should do') Get a private tutor? Or give up studying and try to get a good job? (although what good media jobs are around in times like this. Ehum, yeah, exactly).

So, I think I’ll just push that question a bit further away from me for now, and give myself the whole of April to just ‘be’ before I make the important decision.
Posted by Jonna Wibelius at 7:51 AM

I don't agree with your teacher's idea that "you need to be able to write to be able to speak." A lot of people go abroad and learn to talk a foreign language without even writing it... your teacher is weird...

Future, eh... Don't think about it too much, things you hadn't expected will probably present themselves ;)

There is a very DIFFERECULT for some westerner is Chinese is no relationship between the writing and pronounce of a word. you can know more a word in this exam and did the exam have "pingyi" too?

for future, there is still some time to there, enjoy now and you may know soon.

The thought of taking exams like this gives me the shivers. Good luck with the other parts of the exam!! I hope they don't give you "how our home country preserves culture and history". I couldn't answer that in English to be honest.

As for the future, I also have no idea whatsoever. Would you like to stay in China to work if you did go for a job?

The future, hmmmm.... Since you majored in media communication, so in my opinion that the best country to work in the media world is, AMERICA!

look at this way, you have the most experience with the East and West, moreover you also can speak Swedish, English, Spanish and Chinese!!!! So, why not just look into that, and I am sure that you will snatch the opportunity in no time..

I still think there will be a lot of opportunities in China's media industry. Apparently, CCTV is aiming for aggressive oversea expansion in the future, and that translates into great opportunities for people like you

kanmuri -I spoke to a guy that took the class last semester and he said that the teacher was indeed, very strange... so we've all established that :)

How do u not think about the future?!?! Pls teach me. I've been trying all my life...

mantse -noooo pinyin... I have actually never taken any exam that had pinyin?

Chris -yeah, Sweden isn't really 'rich' when it comes to culture so... ehum... I have to dig deep to be able to talk about that one for 4 minutes...

As for the future... gosh, I really don't know where I wanna work... I change my mind every day!! Although if a nice job offer landed on my lap I think I wouldn't mind moving... within China our outside China. But right now everything is a bit blurry in terms of where I should go/stay...

Incognito -going to America is like going to Australia: impossible. You need the whole green card/sponsorship which is quite hard to obtain for a Swede who want to work in media..

(also, I think my Spanish would need some freshen up before I put it on my CV.. haha!)

胡崧 -you think so? Hm.. dunno. But worth looking into!

KUDOS Joana! don't worry you'll be fine, you never cease to amaze me, to be able to write in chinese I find that amazing!!! I remember I can only read those cubes thingy(dont know their proper name) when we play mahjong with my friends. your english is excellent...Btw-How many languages do you speak???My hub makes fun of me, because I tried to learn different languages like arabic, spanish, french etc..but my enlish is deteriorating...(Lols) I think I have to concentrate with my English first eh?

I'm in Shanghai University and we're taking the HSK the last week in June (29th???).

We've a big writting exam on Tuesday, I can totally feel your pain re: exams.

Your future? ...my advice would be to take a Chinese job and a Chinese boyfriend. Good luck!

I guess if you are independent, and get many opportunities of speaking Chinese, you are perfectly capable of learning the language without university--it might even suit you better. (if it is still your main goal)

Can you tell which textbooks you use at Suzhou University? The photos you took of it look similar to my textbook. I use the New Practical Chinese Reader for self-study, it's probably used more around Beijing.

On the HSK website it says the June test is on June 21 and registration is in May. On site registration is may 18-22 and online is may 1-12 but you know how things always change in china so check with your school. Don't miss this one!

It doesn't matter how old you are, I don't think you'll ever know what you want to do. I just got my masters but I don't want to work in the same field as my education. There are too many options out there and too much to see in the world to settle on one thing!

To your comment earlier, hard to get into the USA? Really...? I thought we were the easiest? Quite literally, you know how many illegals from Mexico we have? Haha. Anyways you could just marry a US citizen and become a citizen yourself. =P

Don't worry about your future or the economy. You have a talent in language. And that alone is wanted everywhere in today's world. No matter how bad the world economy is, people won't just simply stop communicating. And don't forget you are in China, where one can always find a job if he/she posses real skills(at least for laowais, as for chinese, most of us also need 文凭). Just make sure you stand out from the crowd.

So, if Chinese is your passion, learn it well, very well. The university education maybe unnecessary if you are satisfied with street level interactions. But if you want to put your chinese skills in use for a career, I suggest that you hang in there for a while longer. Just know this, you can't really learn 口语 in school. It's the same everywhere in the world. So, don't expect otherwise.

Also, have you ever thought about traveling to other parts of China? Say, the "wild west". Well, we don't have gold or federal marshals and cowboys, but a adventure nonetheless. You'll experience a different China. Shanghai and Beijing are already abundant with laowai. So, get farther away from these two cities may even give you wider choices of opportunities. Who knows?