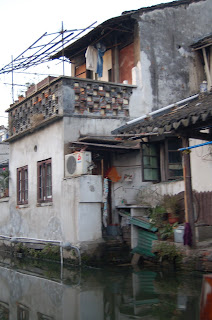 I had a rather ’Chinese’ Sunday which started off with a bus ride to Suzhou’s inner city (观前街 Guan Qian Jie – not my fave spot in the world. Simply too crowded and messy) where me and my Chinese friend went to a large bookshop in order to get me a dictionary. Take note, all of you who are thinking about studying Chinese in China and wanna get a Chinese-English dictionary: get one in China. They are insanely cheap over here. I was choosing between 2 thick ones for 65 and 89 kuai (the expensive one won in the end). I cannot think of any other country in the world where you can get dictionaries that cheap. Although my new, thick buddy is kind of intimidating (the text is so small that just looking at it is headache potential) I used it later that afternoon and I have to say it was very extensive and explained the words much better than my electronic dictionary does (it even tells you if the word is a 书面词 –shu mian ci, which means that it is mainly used in written Chinese)

Once we finished shopping for dictionaries we had lunch at a Thai restaurant and next to us were a young, Chinese couple. After lunch we caught a bus back to SIP, and picked a fairly quiet Starbucks as our base point for studying. Imagine our surprise when that very same young couple that we sat next to at the restaurant came in, and sat down at the table next to us! Quite a small world, huh?! When they noticed us we all started laughing.

It really helped to sit down with my Chinese friend for 3 hours. I went through all my new words, made sentences, used them while discussion things, and so on. Way better than just listening to a teacher and trying to write down everything she says. I understand that there is not enough time during classes to let every single student practice using the new words we are learning, but I still wish that our teachers would make some more room for things like that. The lessons we have at the university are completely centered on the speaking teacher but then again, it’s been like that since the beginning so it’s nothing new. I just wish China would reform their education system at least a little bit and realize that in order to learn, students need to get a chance to speak…. But anyways.

Came home quite exhausted and later that night, after some phone calls, me and two friends booked ourselves flight tickets to CHANGSHA!! Oh yeah baby, it’s ON! We are leaving this Thursday night, and coming back on Sunday. So just a short little trip, but oh how nice it is going to be with a change of scene! I’m going to take loads and loads of photos so you guys will definitely not be left out of the trip. We haven’t made any big plans for what to do with our time in Changsha –we are all quite laid-back when it comes to planning and sightseeing (meaning we like to do a little bit of it but prefers to take everything as it comes) and to be quite honest with you: I could spend the whole wknd there at some restaurants eating (with talking-to-local-breaks) spicy, ‘la rou’ eggplant. 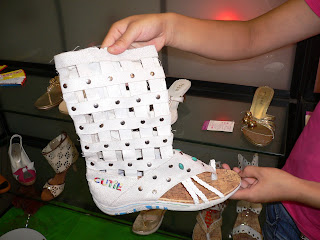 Except for dictionaries you can also find interesting shoes like this one in Suzhou... (no no, didn't buy it -for petite feet only!)
Posted by Jonna Wibelius at 7:24 AM

The Chinese Education system is unlikely to change anytime soon... Universities have been around for a loooong time there.

So, when are you taking the mandarinate exam?? Surely you want to serve the emperor, no? lol

Sounds like a great trip and a fun study session. That must help so much to have Chinese friends! I'm excited for you for your trip! Have fun!

well, Jonna - I'm a language teacher in the USA and we need reform in language classes, the world over.

I'm in a fairly modern program, Dual Language English and Spanish (so we alternate days in each language) for kids from pre-kindergarden to 5th grade~around 11 years of age. But there is never enough time to do everything.

maybe things are better in Europe? I feel that there is very little clear evidence on what is best-practice in teaching a foreign language.

well, best of luck in everything and I'm looking forward to the photos from your trip!

Just curious- How much is 89kwai in UK pounds?
I heard from friends, clothes are very cheap in CHina.

I love those boots, what a brilliant design :) I know exactly how you feel with the Chinese education system. I have noticed with English learning at schools that there is very little focus on speaking, it's all grammar and writing. I have got students who can write very well but are completely unable to say anything but the basics. I guess that's why the oral training centres are such big business at the moment.

You are also right with the above, 89 kuai is about £9 at the moment.

Definitely have as much fun as your studies will allow!!