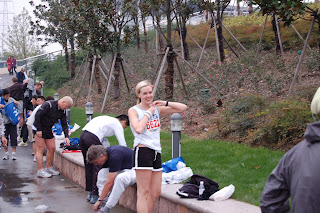 Yesterday at the gym I couldn’t find neither Rocky nor Frank when I first arrived, so I asked for them in the reception.

-Oh, they are not here, they have gone for dinner, said the guy I asked.

OK I thought and went to the changing room to change. Five minutes later I heard Rocky call ‘You La, You Laaaaaa!’ from outside the changing room. I quickly changed and went out to him, handing over the photos. Oh, and when I came out I bumped into Frank too.

-You guys are not out for dinner?

-No… I am having a lesson right now and Frank has been here all the time. We are not going to go out for dinner today, we are going to eat later in the backroom.

(Got to love how some Chinese people answer you when they don’t know the answer to your question: they just make something up!)

We all went into the stretching room where Rocky’s customer (a Taiwanese girl) was patiently waiting. When she saw me she went:

-Yes! Always skipping! Me and my friends call you skipping girl!

(So I am You La in Hunan, Skipping girl at the gym, Fat girl in some Chinese people’s eyes, Big feet in Shanghai’s shoe shops, and Running girl at my university. –Wow, I am rather impressed. I’ve never had a real ‘nickname.’)
We looked at all the photos, which they loved (yey!) and they were all rolling on the floor laughing when I tried to imitate the dialect that the older people had spoken.

They also found it very interesting that I had photographed a lot of people that we met on the street and that I didn’t know. They kept asking me:

-Eh… I don’t know. He’s just someone. And those people were just walking on the street… ehhh, I don’t know?

(yeah good question? Because they went so well with the background?! Gosh, I don’t even know myself!)

All in all it was a hit though, and now I am going to prepare the package for the family Yang in Hunan. Thanks for all of your advices! I will probably add some chocolate (wrapped in red), some cosmetic, maybe a package of snus (Swedish substitute to cigarettes –the dad smokes), and a letter. I am also going to ask Frank and Rock if I can take some photos of them at work, that I can send to their families. I bet the family would really appreciate that (although I guess if I walk around the gym with a camera I will become ‘camera girl’

I really love to read every post you write. Keep inspiring, girl ! :-)

Hilarious, but why not the obvious "Blogging Girl" -- or is that not quite melodious enough? I do like "Skipping Girl." That has a splendid ring.

Oh, by the way, I forgot to mention, my Chinese nickname is "pathetic." Sounds a bit like my English name. At least, I hope that's the only reason! :)

I find it hilarious that they thought is strange that you were taking pictures of people you didn't know. When I lived in China with my 3 young children, we were constantly asked if they could take pictures of my children standing beside their children. And even more often, they just took pictures and video of us with out asking first.

Thank you for your previous concern. Mr Dr says I am progressing well and am down to only two episodes of paranoia a day. He hopes I will be productive member of society in the near future.

Maybe her blogging is secret, she doesn't have a nickname about it yet?

Jonna, I take pictures of random people too, and I never really thought about it much until I read this post. Maybe it is a bit odd to other Chinese, but one day, if you live in another country, you'll be able to show them what the locals in China look like.

flyingfish -whaaaat... 'pathetic'?! How on earth did someone come up with that?! Yeah, I guess I could be blogging girl too, but yeah, I kind of also like skipping girl... :)

Koop tribe -yup, that is just how it is!! I guess most Chinese people don't realize that we are just like them: snapping photos of things we find strange/beautiful.

Adrian -BUTCH?! wtf!?!!? Now I am not going to pay your medical bills anymore!

Brad F -no, my blogging is not a secret although I don't walk around and tell people that I have a blog... I prefer people to find their way here on their own! :)