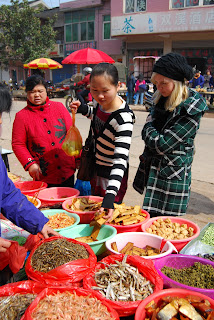 Yesterday I had my first HSK afternoon class. I guess I should start off by telling you that I am not in the 高级班 “gao ji ban” –the highest level, but simply on an intermediate one (中级班?). The highest I have ever scored at an HSK test (and that one wasn’t even an official one, but one that our university arrange last semester because they were so dead curious about how all of us ‘non-HSK-exam-takers’ would do on the test. Most of my classmates did amazingly well meanwhile I was at the bottom of my class) is level 4, and I guess that’s not considered very ‘amazing’ for someone who has been studying for 1.5 years. Well, reading characters isn’t my thing, and the HSK exam has no spoken part –so what can I say? I am still quite happy with the results.

BUT…. Now I have decided to try and do better. And you know what –even though the first HSK class was quite hard, I kind of loved it?!!! And why? Well because most of my uber smart level 5 classmates went to the gao ji ban…. It’s only me, and some other (more human) level 5 classmates in this intermediate level class, plus a bunch of smart level 3 and 4 and 6 students. I don’t know how many will stay in the class. Only after the first lesson some people asked to jump down to an easier class, but one thing is for sure –I am going nowhere! I loooooved being in a classroom again where the atmosphere is friendly, the teacher actually interacts with the students (no monologue) and I can answer questions! It’s still a hard class –because the HSK content is hard- but I believe I will learn a lot of things from taking this class. Every Tuesday we have listening and every Wednesday we have grammar. Actually, I sort of regret no taking this class earlier on… I have just gone from level 3 to 4 to 5 and I always get so surprised when the teacher introduces some completely unfamiliar grammar to us, that most of the other students in my class already know. I guess a lot of them have learned additional things during their HSK classes.

Still a biiiiig shame that there is no speaking part on the HSK test, but I guess I just have to go and visit Rocky’s family more often. Shame I don’t know anyone in Sichuan, who is now on top of my ‘where-I-want-to-go-next’ list (mainly because of the spicy Sichuan food! Gosh, I am turning into a total food junkie aren’t I? I cannot write a single blog post without mentioning food anymore?!). Another downside with the HSK classes is that they are during the afternoons, which means: less time for self-studying and even more homework. But who cares? I am finally in a class where I can speak. Yey!
Posted by Jonna Wibelius at 7:14 AM

Level 4 after only 1.5 years study? wow kudos to you, that really is some achievement!
My goal when I go back to China is to take the HSK till I get a level 8. I don't see much point of doing the higher paper. You need a level 6 to do a phD and a level 8 to be able to teach, but still it would be great to be able to pass the higher paper and get a 9 (I can only dream hehe)
Glad you're finally enjoying your class again. In that kind of atmosphere you'll remember more than you would in a higher level class.
Less really is more.

You must go to visit Sichuen once before you leave, esp. Jiuzhaigou... that place is really amazing place and you can only say "wow" there.... the best tiem should be mid Oct but there is wonderful all seasons.

however, this is said not much easy recently as "sensitive" period of Tibet.

Tiger -is it?? All my classmates scored level 6, and one girl (japanese) got the level 7... (!) So my modest score kind of felt like an embarrassment compared to theirs. I have no doubt that u will get a 9 when u take the test. U seem to have the right mindset to study (and really understand) the written language. I wish I had the same motivation... got any spare one for sale?? ;)

mantse -yup for sure. Not leaving China before I've had mapu/mala doufu somewhere in Sichuan...

Hey Jonna your blog is really great.I am always waiting for your posts and make it a point to read your blog regularly.All the best with your HSK

I'm glad you found somewhere when you can be comfortable while still being challenged enough. Go girl!

For the food thing, well don't worry. I'm going to Hong Kong at the end of the month and the only thing I've been talking about for weeks is the good food I'll have there!

I took the HSK test three years ago and I noticed that most (like 90%) of the test takers are Korean. An study by the U.S. States Department said that Chinese is one of the hardest to learn for English speakers. And for Koreans, I guess Chinese is more easy. So you don't need to feel too bad.

sounds great. Please can you add a search widget to your blog, I'd like to see your posts on learning chinese but otherwise have to trawl through everything!

haha I think the word is addiction instead of motivation. Learning Chinese has become my favourite hobby so I don't really need any motivation. :)
Don't beat yourself up, your other classmates had an advantage as the characters were probably familiar them being Asian and all.
Consideting the HSK is multiple choice, for the questions they guessed the answer they had a higher probability of getting the right answer.
Like one of your posters once said 人比人比死人.

I'd love to go to Sichuan as well, esp Chengdu. Your recent posts about your travels in China are making me so jealous. I can't believe I was in Hunan province and didn't try spicy eggplant??

Kanmuri -Hong Kong!??!?! Ahhh you lucky thing! Enjoy yourself and enjoy that dim sum.. YUM! (glad to hear I am not the only one obsessed about all the things I constantly wanna eat)

gweipo -good point! I will try to add a search widget over the wknd. Stay tuned!

Recipes for life -thanks so much! :)

John -yeah I know. Most HSK takers are Japanese or Koreans.. I am not competing with them. I just wanna beat my last score (level 4) and get something better this time.

Little tiger -addiction to learning a language sounds like a gift. Still jealous! Trying to work one up myself although unfortunately it is hard for me to get addicted to something unless chocolate is involved... ehum.

Yeah Chengdu is on top of my list too...

Where do u study? i have studied chinese in fudan university for last two years, and recently got score 6, feel so happy but now gotta move to poland to study, feel kinda sad to drop my school life in shanghai..