Spice up your day at Qipu Lu 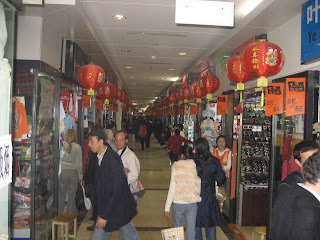 Well, much better than those usual fake markets...

Back after a blog free weekend. Sorry. But I was in the need of a break.

Friday’s exam went quite badly, so when my classmate Willing magically pulled out two train tickets to Shanghai from her purse and asked me if I was keen to join her, I started jumping up and down. Down the drain went my plans of a ‘healthy’ (home cooked tofu with veggies and cottage cheese + a 6 mile run) and a ‘productive’ Friday (58 new words and 2 –already delayed- homework essays was on my ‘to do list’). Instead, we jumped into a taxi and headed to Suzhou's railway station.

Since Willing’s tickets were for 11am and it was only 9.15am, we decided to try and change them for an earlier train. We tried the ticket office first, but it was useless. Then we tried to ‘discreetly’ sneak onto the train anyways, but as you all might be able to figure out –being 175 cm tall, blonde and discrete is kind of hard to pull off over here (my attempt to stuff my hair inside my hat and look like a bold, tall person didn’t pay off either). I was stopped straight away and Willing received angry stares from the train guards, almost as if they were telling her to ‘take better care of her mischievous laowai.’ (I love how everyone sees us together and take for granted that she is my translator just because she's Asian).

One and a half hours later (spent on KFC –oh, this was a quality Friday) we got on our train and went to Shanghai. The first thing we did in Shanghai was to go and stuff ourselves at my favorite Hunan restaurant (first not-home-made-meal of this week… allow me to be excused) followed by coffee and a cookie (whoops, no excuse for that one) and when we felt as if we were about to explode of all the food, Willing suggested we’d go to Shanghai’s infamous ‘Qi Pu Lu’ and indulge in cheap shopping. I wasn’t hard to convince.

During my 2.5 years in China I have never actually been to this Qi Pu Lu place (the name, ‘qipu lu’ is a supposed to sound like ‘cheap lu’ because it is said to be so cheap). Although I have heard a LOT of stuff about it. It seems that Qipu Lu is one of those places that people love to hate? Or maybe that’s just an idea I’ve been getting, but comments about Qipu Lu often goes like:

-The sale’s people there are crazy. They pull you and follow you around.

-The clothes are cheap but the quality sucks. Wash it once and it will fall apart.

-It’s too packed with people.

-The sales people are so aggressive….

Well first of all, the place was huge. So I never experienced it as impossible to escape those annoying sale’s people who kept following us around (a bit of rudeness here gets you far). Thieves? Well no one put their hands in my bags. Packed? Sure. But what cheap shopping mall in China isn’t?

We spend a good 3 hours at Qipu Lu… bargaining, looking around… laughing at the funny comments we got in the shops. This one is a classic:

-Sorry you are too big, I have nothing you can buy (Said by the sales lady in a shorts’ shop). Of course I HAD to prove her wrong and that I did buy buying a pair of shorts with a superficial smile on my face, going ‘sure I can get into these… I am not THAT big you know!!’ (and seriously, I thought I would, they didn’t look that small after all). Turned out, however, that the sale’s girl was right. I could get them over my hips (impressive!) but I couldn’t close the button. Lord, I am happy that I couldn’t try them on in the shop.

And then, the usual 'warning' sign when I get close (which makes everyone turn around and look at me)….:

(and then, 34 seconds later when I took a hike)

And then of course, the standard:

All in all it was a quite OK afternoon. A little mood booster and a nice change of scene. And did I buy anything? Sure I did (except for those shorts I couldn’t fit into –the rest actually fit). Will I go again? Maybe not... Although, ask me after our next exam and you’ll probably see me running towards the train station….

i went shopping in Beijing once. the sales ppl were like as u blogged too xD

Jonna, I'll be in Shanghai from June 10th till July 22nd, what's the name of that Hunan restaurant & it's address ? What dishes did u ordered ?

Please can we have some pics of what you bought? Might tempt me to brave Cheapu Lu myself one day...

Is that how you bargain? I always start low, then meet halfway. Thanks coach!

That reminds me shopping at Dong Dae mun market in South Korea... It wasn't that cheap tho!

Sound like you had a lot of fun. I want ot go!!

My friends (girls) always like to go there when they come to China.... They not really love the goods people sold there but like the atmoshpere, bargain, not only for 10% or 20% but 50% or even 90% more, they enjoy to bargain with those salesman. when they get a large discount after the bargain, feel wonderful ^_^!!!

Lovely haggling!! That made me laugh :D

Sounds like you needed a break and got one.

Some of the sales people at the small "kiosk" stores (essentially little booths in the center of the walkways) at malls in the US can be quite rude/aggressive as well - basically stalking you as you go by. Very annoying. I can see the product you are selling, and if I am interested, I will approach YOU.

I always order their eggplant (la ruo qie zi), spicy beef, tofu (jia chang do fu I think it is called? Although I might be wrong), but they also have good bamboo dishes, mushroom pots, and so on...(more about it here: http://sheinchina.blogspot.com/2008/06/some-of-my-fave-chinese-eats-in.html)

Becky -hm... let's see if I can get my lazy bum around to take photos.. I mainly bought some t-shirts (19 kuai) and a really cool t-shirt dress (40 kuai) and some other shorts that actually did fit me... :)

Adrian -never give in!!! It's my haggle-mantra.

kanmuri -it IS fun when it is cheap... although of course the quality suffers for a bit :/

mantse -that's so funny.. I HATE the bargain part, but here in China it's a must do....

Casual observer -yeah, 'fortunately' I was in a kind of 'rude mood' so I had no problems getting rid of those stalkers... :)

-Thanks! (Damn, I should have said 20).
:)
take care it seems you are Acquiring our eastern culture :)

that must be a very interesting sight to see.

It's called shopping therapy! Hope you don't have any buyer's remorse.

Hi Jonna! That reminds me of my experiences in the Philippines. I always have to argue and haggle to get a decent price, and sometimes when I use the "well I don't want it then" line it doesn't work. I have to walk around quite a bit to find someone that will give me a good price. This usually happens when I try to buy cigarettes. They should be 34 Philippine Pesos, but people try to charge me 40 or even sometimes 50, which is retarded, since I can get them from a 7-11 convenience store for 38. Don't get me wrong... haggling happens even for locals, but my wife says she never gets a good deal on anything when I'm with her, even though I feel like we got a decent one.

There is a place called TuTu Ban (I think?) in the Philippines that's a cheap market similar to the one you described. It used to be a train station for Americans when we controlled the Philippines I believe, and was originally nicknamed the Toot Toot Barn. The name just got shorter over time.

As far as going out for the weekend instead of studying...everyone needs a break! And especially after doing poorly on a test. Coffee and a cookie sounds like a perfect way to cheer yourself up. It always works for me!

well done.....all I can say is that you got some real senses living in China. Good for you, keep going.

It is kinda funny and sarcastic, I have almost forgot this sort of thing when I was shopping in Beijing last year. Eventhough I am a Chinese person myself. Maybe I've been living in Europe too long.......lol. People rarely do that in here. At least, not in UK and Ireland.

I guess as an individual is hardly change people surround by us ie. the society as a whole. However, we can shape ourself to fit into perticular society.

Blank-socrate -yeah, I have actually become a bit stingy over the years here... :/

Incognito -hm... I believe that is nothing out of the ordinary here in China? Especially not in big cities like BJ and SH?

grammy -no remorse. Retail therapy and/or chocolate has been my saviour (after bad days) for a looooong time.

Brad F -I know what u mean. Sometimes I get all annoyed if we go to a new fruit shop and the prices for bananas is 2 kuai higher than at our usual shop... it is only 2 kuais but I still cannot get over it. I hate the feeling of being cheated.

nooo dear I didn't mean being stingy :)
it just a culture of "Negotiations" in the price

lol, I am a chinese who grow up in Stockholm, Shanghai is my hometown, going there a couple months almost every year, but I have never been in a (Fake item shop) before, have actually been looking for it, and now I know where it is, guess I am the real Laowai, haha.

BTW. I am 1,82 height, abit over average here in SH but I never hade problems in finding cloth matching my size(only exception is Jack and Johns which seems to all been extremely small sized), but then again maybe its cause I am a guy, I dunno...

So just to be clear, you came to Shanghai and didn't look me up!

woai -I was in a kind of destructing mood... you should b happy I never looked u up :/. Although we should make sure that blog-drink-think happens sometime before summer!

Jonna - All the bloggers (Swiss, Dingle, WoAi)are going to Beijing this weekend. Maybe the following weekend?

Woai -I have visitors here in April... let's wait for May! Enjoy Beijing! :)