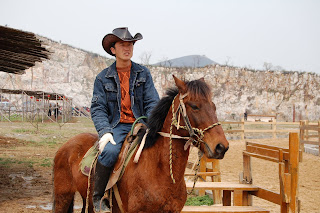 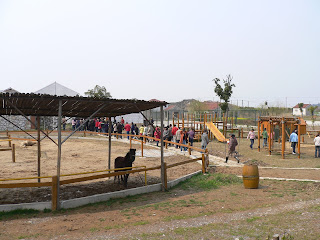 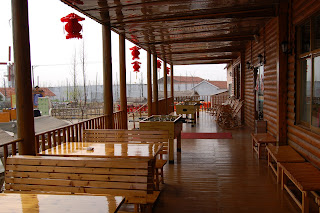 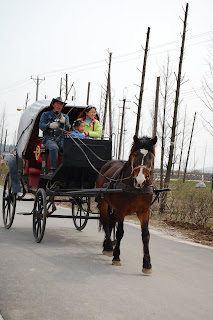 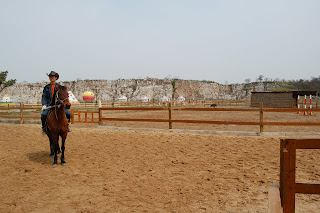 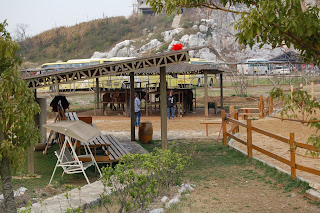 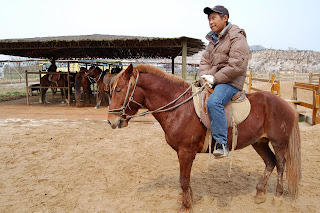 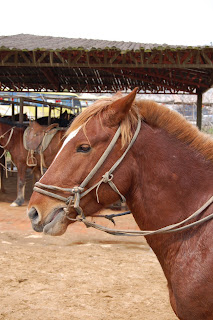 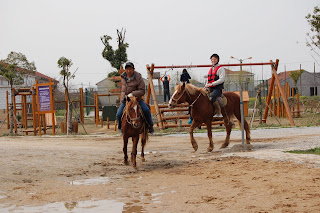 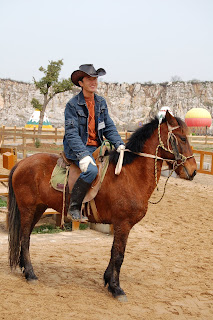 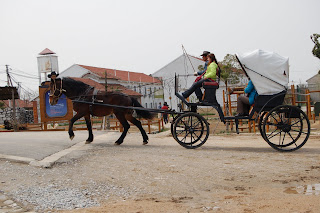 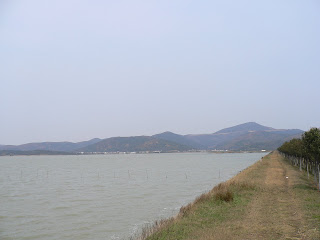 (Warning: long story!)
Every now and then, I manage to scare my boyfriend with my pregnant tendencies: sudden (strange) food cravings, or, like in the beginning of 2007: an instant urge to go horseback riding.

When I first said it he thought I was joking: I had never before even uttered that I was interested in horses. But, when I continued nagging about how nice it would be to ‘gallop away in the sunset’ he sensed that I was serious (even though he was as surprised as I was of my sudden ‘need to be on the back of a horse’ –I haven’t gone horseback riding since I was a 10-year old, chubby kid).

-Well, arrange it and I’ll go with you, he said, even though he’s never been on the back of a horse for one simple reason: he’s scared of them.

I took my call very seriously and my (at that time) Chinese workmates helped me find a place in Suzhou where you could take lessons as well as go on a longer ride in the ‘surrounding nature.’ It sounded too good to be true (and it was): I would go on the tour meanwhile my boyfriend would learn hot to trot in the paddock. Both of us liked this arrangement.

Since my Chinese language skills were quite, ehum, terrible at that time, one of my life-saving workmates helped me call and arrange everything. After 20 minutes phone discussion she turned to me with a big smile and said that the horseback riding club would be expecting us at 11am this Sunday. I was over the moon.

My workmate had written down the name of the club, 2 phone number and one address on a piece of paper and told us that it wasn’t too far from where my boyfriend’s Suzhou flat was located (in SIP –Suzhou’s Industrial Park). So, 20 minutes prior to where we were supposed to be there on that very Sunday, we jumped into a taxi.

When we gave the taxi driver the address he looked puzzled, especially when he listened to us going ‘qi ma, qi ma’ (=ride a horse, one of the few things I knew how to say in Chinese by that time) from the backseat. He turned around and said something to us that we obviously didn’t understand. We kept behaving like total kids; jumping up and down in the car, and asking things like ‘are we there yet?’ So, when the driver turned around and said: ‘no, this place is very far away!’ we were a bit surprised. My workmate had said it was only 15 minutes away? How could she have been so wrong? Still, we decided to trust the driver (who turned out to be a very kind man).

One hour later we arrived at what I guess can be described as a ‘Chinese cowboy ranch.’ It was something between cool and over the top, and it was completely in the middle of nowhere (we are talking 1 hour from Suzhou, Taihu lake….). Since we sensed the isolation of the place we asked the driver if he would mind to hang around and wait for us and he didn’t. Like I said: very kind man!

No one at the ranch could speak any English and no one seemed to have any idea who we were or what we were doing there, even though he had made the arrangements. When we watched a Chinese ‘cowgirl’ doing something like a ‘wild rodeo ride’ in the paddock I could see my boyfriend swallowing hard. This was a little bit more hardcore than we both had expected.

Suddenly a Chinese man (wearing a large cowboy hat, as well as chaps) who spoke good English (he was from Taiwan he later told us) appeared and asked us what we were after. We explained that we were the foreigners who had booked the horseback tour as well as the lesson in the paddock for 11am this day. We apologized for being so late and asked if it was still possible to go through with our plans. The man started laughing and said that ‘of course it is OK!’ and called for 2 rough looking cowboys, said something to them in Chinese, and then we were taken to the horses. We got helmets and a horse each, and were told to ‘get on our horses’ so we could ‘get going.’

I could tell by looking at my boyfriend that he was kind of terrified, but being all Finnish and unable to ever admit to feeling even a little bit uncomfortable (he’s that kind of guy who won’t admit that he’s feeling a bit ‘ill’ even when he’s hugging the toilet as a result of a violent version of food poisoning) he bravely mounted his horse and off we went.

Our cowboys quickly sensed that we were no ‘Lucky Lukes’ and went quite easy on us. We rode through swarms of insects along Taihu lake, did a bit of trotting, but no galloping (the horses were quite wild), and had a painful attempt to conversation (at least we found out that our cowboy guides were form Mongolia) before we turned around and went the same way back. All in all we were out something like 40 minutes and my boyfriend didn’t regain any face color until he jumped off his horse back at the ranch.

We paid something like 250 yuan (which felt a bit hefty seeing that our ride had been so short, but at the same time I don’t think my boyfriend would have managed any longer, so it was OK) and went back to our taxi who greeted us with a smirk before he drove us back to Suzhou’s industrial park.

Back at wok on Monday morning, my workmate asked me about my experience. I told her about it, adding that it had felt a bit weird that: 1. The club was located to far away and 2. That no one seemed to know that we had made an appointment. My workmate agreed that it was strange and after some googling as well as some phone calls, we established that there were TWO (!) ‘Lakeville country clubs’ in Suzhou: one close to SIP, and one out at the Taihu Lake. Turns out that we had made an appointment at the one near SIP, and then gone to the one at Taihu Lake, because they both belonged to the same business and my workmate had simply mixed up the addresses when writing it all down on a piece of paper for us.

Oh well, still turned out OK in the end. Although that was one of those moments when I remember thinking: ‘gosh, I really have to learn Chinese!’
Posted by Jonna Wibelius at 9:51 AM

Wow, what a crazy thing to happen! At least you got your horseback riding in. Will your boyfriend ever do it again? Sounds like he was less than thrilled. But it also sounds like it was kind of fun. Weird how that happens. I like your pictures.

Just breathe -that IS weird indeed!! :)

Colleen -he's been on a horse since that day... twice! Although I think he hates it as much every time!

sunnysweatpea -yeah we live here together.. it was a mutual decision to come to China although initially it was my idea.. :)

Maybe I could persaude him to come as well then :P I'll work on him ha ha!

Your story captured me.It is great to learn more about the customs and life of the people out there,their adventure and experience.
Great pictures.

You know there are Japanese Cowboys out there? When I grew up we lived on a mountain and further up was a man who called himself Randy and had two paddocks and a cabin. He would take visitors in and teach them how to ride and organize rides through the rice paddies, he always dressed as a cowboy. now that I think back he was not your typical Japanese man.