Almost there but not quite yet 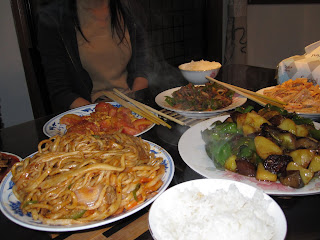 Some of our Chinese friends invited us to their house for dinner the other day. I love going to someone’s house for dinner, there’s simply something about homemade food that restaurant food cannot measure up with. And this time was no exception. My friend made us quite a bit of dishes, including some dong-bei food, plus our all-time-favourite, “fan qie chao ji dan” (番茄炒鸡蛋 egg and tomato stir-fry). It’s a real simple dish, and still I cannot get it right when I attempt it in my own kitchen. Eating it at restaurants is OK, but having my friend’s homemade version was simply outstanding. I also watched her every move while she made it, so who knows, maybe next time I try I end up making an edible version too?

This couple is a real funny one. The guy is from Harbin and the girl is from south China. They are quite “rebellious” compared to some of my other Chinese friends: They live together even though they are not married and have done for a long time. They don’t want to rush into marriage and baby making even though they are in their mid-twenties, and they are both (although especially the girl) super keen on going abroad travelling. Not your average Chinese couple I would say. Also, the guy won some extra laughing points from us when he told us about his minority-religion-dilemma:

-So I belong to the hui minority and apparently we are not supposed to eat pork. It’s like being Muslim.

-Well because it tastes good, hehe.

-Oh no! My parents are strict Muslims. Every time they come to visit we have to empty and clean the fridge to make sure it is 100% pork-free.

-Nah, it’s not too bad. Harbin’s quite far away you know. They don’t come so often.

We were laughing at the guy’s interpretation until he soon reminded us that although he was rebellious in some cases, he was still insanely traditional when it came to other things:

-On the other hand, it’s great when my mom comes to visit. Then she cooks, cleans and takes care of me just like back home.

-Isn’t that weird? Being in your mid twenties and having your mom taking care of you?

-Well if it isn’t her it is my girlfriend.

Yeah, that’s right. Dong-bei men don’t do housework. I almost forgot. And we are back in the Stone Age again.
Posted by Jonna Wibelius at 7:36 AM

The secret between a good 'fanqie chao jidan' in my experience is adding the correct amount of sugar.

That couple reminds me of my Chinese teacher and her boyfriend. They also lived together but weren't married. Every time her parents called around to see her, he would have to move out all his belongings and pretend to drop in to the flat to say hi when the parents had arrived.

Funny, my friends say it's totally normal for Chinese couples to cohabitate before marriage. Maybe it's different here in Beijing?

little tiger -I bet u miss harbin... do u recognize the veggie dish in the picture? My friend told me it is a famous Harbin dish... 3 veggies: potato, eggplant and capsicum... or something like that? Apparently there are not that many veggie dishes in meat-Harbin?!

So it's the sugar that determines if a fanqie is a good or a bad one... worth considering.

Flyingfish -I don't know really. People tell me different things every day. Most people that I know over here don't wanna live together before they get married though.

I do recognize that dish. It's called 地三鲜 and is made with aubergine, potato and green peppers. I tried to make it once myself but it just turned out okay. You have to use an enormous amount of oil to fry the ingredients which I was quite reluctant to do.

When I was in Shanghai on a bus, I passed a dongbei restaurant so I can imagine there are a few more around the place. One of my favourite dishes (and of all the foreigners in Harbin) is 锅包肉 (a kind of sweet dish with strips of fried pork served with coriander or carrots. YUM!)

I'm not a huge meat eater and found a lot of veggie dishes in Harbin such as cold salads (凉拌) which were delicious.
There was lots of dog around which I wasn't in any hurry to try I can tell you!

yeah, it's all in the sugar in my opinion.

Please don't post the large photos, I can't resist them.
This is the first time I heard Hui people ate pork. (I have two friends are Hui minorities, they are strict on that.) Aren't they all Muslims? Let's hope their parents don't recognize Chinese, or you will turn to a 告密小人。

The veggie is called 地三鲜, a north-east regional dish.
Forget about the sugar in 番茄炒蛋. I'll show you how to do the real stuff.
1. Beat 4 eggs, and cut 2 big tomatoes.
2. Prepare 4-6 ShiChuan peper corns. Cut a few grön lök pieces into egg liquid and add a little salt(not much).
3. Heat 2 soap spoon oil in a wok. It need to be hot, so don't use olive oil.
4. Pour the egg liquid into the wok, stir-fry it until turn to solid. Take it out.
5. In the same wok, add a little oil, wait till hot, pour into peper corns and after a few seconds, tomato pieces. Stir-fry for 15-30 sec.
6. Add salt according to your taste, add the egg, continue stir-fry for half minites. Done.

It was certainly interesting for me to read that article. Thanks for it. I like such topics and everything connected to them. I would like to read more on that blog soon.

Little Tiger -there are plenty of dong bei restaurants in Shanghai. At one of my favorites (called Dong Bei Ren) you can get dumplings (yum) with fan qie chao dan (yum yum!). Yeah, imagine that. 2 goodies at once = heaven. Their food is real salty though, but it is nice at times.

马麟 -hehe, I dont think we need to worry about his parents reading my blog.. :) your description of how to make the dish sounds like the way my friend did it... minus the sugar. she said it was important. I guess I have to try making both versions to find out which one is the best.

番茄炒蛋 must have sugar lar
Because tomato is a bit sour.

Mum always add sugar - it's a must. But I guess if you can find good, sweet tomatos, you might not need it. :/

Hilarious... when I was living in Dubai I found the young Muslim couples doing the exact same thing (the living situation not the pork) lol